Kaniksu Land Trust temporarily closed several trails at Pine Street Woods on Aug. 15 after mountain bikers reported seeing a dead deer near the Crooked Tree overlook. The organization elected to close trails on the west side of the property after employees located the carcass and confirmed it had been killed by a mountain lion.

“We are monitoring the kill site daily and will be reopening all the trails once it’s evident that the cat is no longer returning to the site,” said Regan Plumb, conservation director at Kaniksu Land Trust, which oversees the Pine Street Woods. 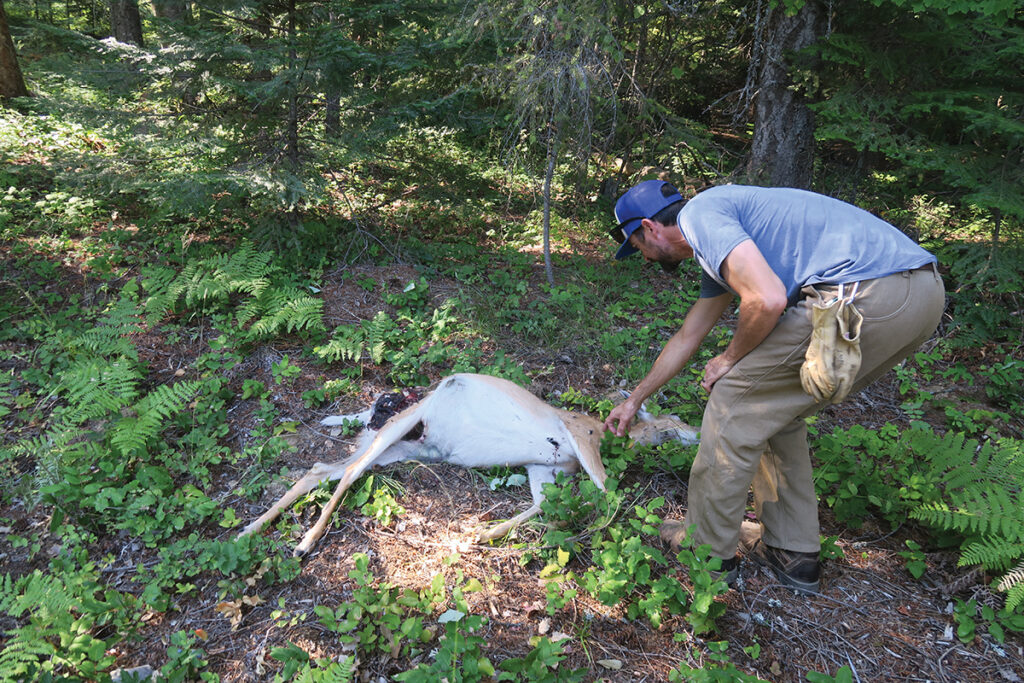 The news made the rounds on social media early in the week, with some commenting they had no idea mountain lions were active so close to Sandpoint.

“It’s good for people to know that we live with mountain lions regularly,” Plumb said. “I expect this cat is a local cat who has hunted at Pine St. Woods for years and never had the misfortune of killing a deer on the trail and getting interrupted by mountain bikers.”

Land Manager Jeff Thompson was tasked with moving the deer carcass away from the popular Crooked Tree overlook and got an up close and personal view of the cougar.

“When I was getting it ready to move, the mountain lion was right there, 50 feet away,” Thompson said. “You can see [on the carcass] where the cat had grabbed it and pulled it down and put its teeth in the jugular. It killed it and left it there for the night, and last night went back and pulled it into the woods and ate one of the quarters off of it. Sometimes they kill and eat, then abandon the kill, but usually once they eat on it they’ll stick around.”

Thompson said it was a full-grown cat and looked well-fed, which is a good thing when considering potential dangers to humans.

“If they’re eating good, it’s in their interest to leave us alone,” he said.

Much of the fear people have regarding cougars stems from the fact that they aren’t exposed to them as often as bears, Thompson pointed out. While encounters with humans are extremely rare, Thompson said if you see a cat in the wild, make yourself appear as large as possible, don’t run, speak firmly and slowly back away from it.

“These cats can live right on the edge of civilization,” Thompson said. “They benefit from things they can predict. They like it when they know people are on the trails, cars on the roads, corridors they can safely walk and hunt.”

Plumb said after KLT reached out to Idaho Fish and Game for guidance, they issued a trail closure, posted signs and shared the details on social media.

“It wasn’t necessary to close the entire property down,” Plumb said. “We live with those cats and I think this is a great exercise in building awareness of how our habitats overlap.”

As of press time, there was a substantial amount of meat missing from the carcass, so Plumb said she was hopeful the trails will be open again Thursday or possibly Friday. Currently, the trails on the east side of the property are open, but all western trails remain closed to allow for the cat to finish its meal. This includes Pine Cone, Owl, Crooked Tree and Mushroom trails. In the meantime, Plumb encouraged trail users to keep their dogs close to avoid any altercations with the lion.

Thompson said it’s important to remember we live closer to wild cats than we’d like to believe, but they usually avoid interactions with humans.

“I’m sure there are cats moving through close to town and around town,” Thompson said. “If we knew exactly how close, we’d probably say, ‘holy cow.’”