As with countless communities across the United States, the people of Bonner County were shocked and angered by the news that forces of the Japanese Empire had attacked ships at anchor in Pearl Harbor, Hawaii on Dec. 7, 1941. Also as with countless communities, the reality of what that attack meant remained obscured by geography until the names of their own sons and daughters started showing up in the casualty lists.

Almost two weeks after the event, the Friday, Dec. 19 edition of the Northern Idaho News carried a front-page article headlined “Anxiety Is Felt For Dover Youth.” In it, the paper reported that the “First horrors of the ‘stab in the back’ attack by the Japanese, which touched home, came with the report Tuesday that [Francis] Mostek, 21, who was attached to the U.S.S. Arizona, lost his life when the ship was bombed on December 7 near Pearl Harbor.” 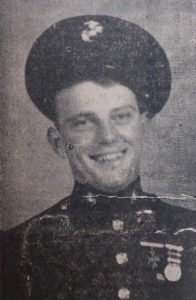 Revealing the uncertainty surrounding the exact number of casualties, the paper went on to state, “Early reports of the Pearl Harbor tragedy listed no men from Idaho, but a later checkup showed that at least three from the Pacific northwest were killed when the surprise attack was made.”

While the Mostek family, then of Dover, had been notified their son was “missing in action,” yet another local family was also anxiously awaiting news of their son. “Harold Stockman, petty officer third class, son of Fred Stockman of Kootenai, also was believed aboard the Arizona when it went down, but his family as yet have received no word.”

Subsequent casualty lists would identify 12 Idahoans who went down with the Arizona, adding their number to the 1,177 service members who perished when Japanese dive bombers pummeled the battleship. A total of 2,403 Americans, including sailors, soldiers and civilians, died in the attack on Pearl Harbor, which makes the sinking of the Arizona an especially devastating blow as it accounted for nearly half of all American losses that day.

According to numerous published sources — including full-page ads in local papers memorializing the war dead in 1946, Mostek and Stockman were the only Bonner County servicemen to die at Pearl Harbor. As with all but one of the Idahoans who went down with the Arizona, neither of their bodies were ever recovered — they remain entombed along with about 1,000 others in the sunken wreck of the Arizona, maintained by the National Parks Service as the Pearl Harbor National Memorial.

With the 78th anniversary of the bombing of Pearl Harbor, it becomes increasingly difficult to sketch a portrait of these lives. According to the NPS, only 335 service members survived the attack on the Arizona — many only because they were off duty or on leave. Following the death of 98-year-old Lauren Bruner in September, there remain only three Arizona survivors: Lou Conter, 98; Ken Potts, 98; and Don Stratton, 97.

The last area survivor of Pearl Harbor, Ray Garland, died in April in Coeur d’Alene at the age of 96. A Marine sergeant stationed on the USS Tennessee, which was moored directly between the USS West Virginia and the Arizona, Garland was an eyewitness to the attack as Japanese planes swung in toward Battleship Row to drop their bombs. As reported by the Coeur d’Alene Press and Spokesman-Review on the occasion of his death, at least one of those dive bombers flew close enough that Garland could see the pilot’s goggles.

Barring family records and direct recollections, reconstructing the experiences of men like Mostek and Stockman, who perished on the day of the attack, relies entirely on local printed reports and the compilation of biographical material by organizations devoted to preserving the memory of those whose lives were lost on Dec. 7, 1941.

Much of what can be known comes from articles in the local papers, preserved by the Bonner County History Museum and digitally accessible via the East Bonner County Library. Mentions of Mostek and Stockman are brief prior to the attack, yet they illustrate a tight-knit community that considered it newsworthy whenever one of its young people put on a uniform.

The Northern Idaho News reported on Friday, March 8, 1940 that Mostek left for Seattle the day before to join the Marines and was immediately transferred to San Diego.

On Thursday, May 23, 1940, The Sandpoint Bulletin noted that Stockman had enlisted in the U.S. Navy and gone on to San Diego the previous Sunday.

The Bulletin reported in July that Mostek had written to his mother, Sophia, in Dover that he’d arrived in Honolulu and was attached to the Arizona. Less than a month later, in early August, the Northern Idaho News wrote that Stockman spent a weekend at home in Kootenai with his father.

A year and four months later, both young men would be killed, but Sophia Mostek would not receive confirmation of her son’s death until February 1942, with a letter from Marine Corps Lieutenant General T. Holcomb.

On Feb. 13, the Northern Idaho News printed Holcomb’s letter in full, which informed her that, “your son, private first class, Francis C. Mostek, USMC … has been officially declared dead by the Navy Department as of December 7, 1941.”

“There is little I can say to lessen your grief,” Holcomb wrote, “but it is my earnest hope that the knowledge of your son’s splendid record in the service and the thought that he nobly gave his life in the performance of his duty may in some measure comfort you in this sad hour.”

The paper noted that Mostek served as a gun instructor on the Arizona, “which was sunk when a Jap dive bomber dropped a bomb down the funnel of the ship.”

Mostek left behind a large family. Though his father died in 1937, he was survived by his mother Sophia, three sisters and five brothers.

In September 1943, The Sandpoint Bulletin wrote Sophia Mostek had received a letter from USMC Col. John Dixon that she would receive on Francis’ behalf the Purple Heart, American Defense Service Medal and Asiatic-Pacific Campaign Medal. The paper also noted that three of her remaining sons were in uniform: Clem in the Army Air Corps in England, Ole in the Army in the Aleutians and Raymond with the Marines in New Zealand.

Raymond was reported missing in January 1944 and, in March that year, Sophia received word that he had been killed in action on the island of Tarawa in November 1943. Her other sons survived the war, though Ole died in a tragic work accident in Dover in 1947, leaving behind a wife and two children.

Francis Mostek remained in the local news almost up until the end of the war. The then-renamed Sandpoint News-Bulletin reported on Thursday, Sept. 7, 1944 that “Mrs. Mostek of Dover has received a memorial for her son, Francis C. Mostek, of the United States Marine Corps, who gave his life in the service of his country December 7, 1941, at Pearl Harbor. It was signed by President Franklin D. Roosevelt.”

The article featured a photograph of a smiling Mostek, wearing his dress uniform and cap set at a jaunty angle. Below the image, the paper wrote that Army Corporal Lawrence C. (Ole) Mostek, who had by then served two years in overseas combat duty, had received the Good Conduct Medal.

Mostek brothers Francis and Raymond appeared in the “Honor Roll” published in 1946 in the Sandpoint News-Bulletin — one of three sets of Bonner County brothers to fall in World War II — as did Harold Stockman. However, unlike Francis, Bonner County’s other Pearl Harbor casualty received almost no other notice in the local papers. Aside from speculation that he may have died on the Arizona, there were no articles verifying his death. Nor any reports of his father receiving a memorial or posthumous medals. Though Stockman appears on the list at the Arizona memorial in Hawaii and on the ussarizona.org website, no profile accompanies his name.

It is unclear why so little public record remains of Stockman, other than to point to the hazards of history, the magnitude of the losses in war and the uncertainty it brings. This was perhaps on the mind of an anonymous local poet who submitted seven stanzas to The Sandpoint Bulletin on Feb. 26, 1942 — about two weeks after Sophia Mostek received confirmation of her son Francis’ death. He or she wrote, in part:

Our boys will leave us one by one,

The best of the bunch they’ll take;

There’ll be laughter and tears and sad goodbyes

And for many their last handshake.

The title of the piece: “Lest We Forget.”