The images are blurry and no faces are visible, but it’s clear what people are doing: two are hauling a kayak, one has an inner tube slung over his shoulder, others carry fishing poles. Some are kids, some are families. All are traversing a user-made trail leading from Railroad Avenue in Ponderay across two sets of Burlington Northern-Santa Fe and Montana Rail Link tracks that separate the residential neighborhood from the nearby shoreline of Lake Pend Oreille. 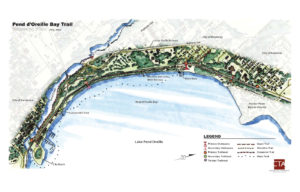 “It really demonstrates that there’s a great attraction there,” said Susan Drumheller, president of the nonprofit Friends of the Pend d’Oreille Bay Trail.

Drumheller spoke at a recent open house in Ponderay, highlighting the need for a railroad underpass providing a safe means to access the lake. Pointing to a large placard depicting stills from the motion-activated camera, she noted that 260 people were seen crossing the tracks over a two-week period in June — a situation that is not only dangerous for residents, but hazardous for the railroad companies. A technical feasibility study has already received positive feedback from BNSF.

“They recognize they have a safety issue,” she said, adding that BNSF and Montana Rail Link have both written letters of support for the underpass project.

That’s good news for the trail group, but of even greater significance is the outcome of a federal transportation grant, which the Friends of the Pend d’Oreille Bay Trail submitted in June. Drumheller said federal officials are expected to make a decision sometime in November.

“I really feel like we’ve done our homework and have a really good proposal,” she said.

The proposed underpass would cost about $9.82 million, paid for primarily by the grant — a funding vehicle under the Obama era TIGER program — which would cover design, engineering and construction.

The city of Ponderay would also kick in its support, in the form of $40,000 per year from the city’s bed tax over four years. If approved, the project would be administered by the Local Highway Technical Assistance Council.

Meanwhile, a big “what-if” is how the railroad-right-of-way will be made available for construction. Drumheller said Pondery would need to acquire an easement from BNSF in order to build the underpass, but that has yet to be negotiated. The grant could potentially cover that cost, but the best-case scenario is that BNSF donates its right-of-way to the city.

More immediately, the other big question heading into the Nov. 5 election is whether Ponderay voters will approve the proposed 1% local option sales tax. Drumheller said that if Friends of the Pend d’Oreille Bay Trail win the grant, the LOT could help fund amenities at the underpass-equipped shoreline, “so it’s not just a hole under the railroad tracks.” Some examples include a picnic area, fishing pier and bathrooms.

The grander vision positions those amenities as paving the way for commercial development on a nearby parcel of property south of the proposed underpass and immediately west of the tracks, which Ponderay has already acquired. That could lead to the establishment of a “new little downtown” leading to the underpass, and also open the way for connecting the Pend d’Oreille Bay Trail directly to the commercial core around the Bonner Mall — in a sense, stitching together the town via its access to the lakeshore.

Ultimately, though, the underpass would facilitate a much broader connectivity, with the longtime dream of establishing an unbroken trail from Sandpoint to Ponder Point south of Kootenai. Farther down the trail, so to speak, would be the hope that more connections could be made to the University of Idaho property on Boyer Avenue, with a pathway over Sand Creek on the Popsicle Bridge. The 75-acre property is in the process of being purchased by a private developer, so plans are still up in the air. Still, Drumheller and Ponderay City Planner Erik Brubaker are optimistic that a multi-city trail network could be in the future.

Focusing more on the Pend d’Oreille Bay Trail itself, another possibility would be using LOT monies to purchase additional private property or public easements in order to increase how much shoreline is accessible to the public.

However, Drumheller said, if the feds deny the grant, the LOT could be leveraged for local matching fund, making a future grant request more competitive.

Between the upcoming grant decision and the LOT ballot measure, Drumheller said that whatever happens there is a lot of momentum for moving the trail forward.

“Being able to pull this all together at around the same time is really beneficial,” she said. “I’m feeling really confident about it.”