Memorial planned to commemorate one year anniversary of Riley shooting 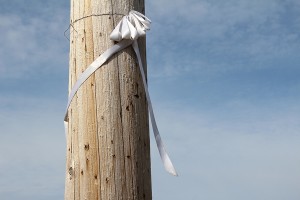 A ribbon hangs across the street from where Jeanetta Riley was killed. Photo by Ben Olson.

A year ago, a police shooting occurred in Sandpoint that still reverberates throughout the community. It was dusk on July 8, 2014 when Sandpoint Police officers Michael Valenzuela and Skylar Ziegler shot and killed Jeanetta Riley, 35, after an altercation in front of Bonner General Health’s emergency room.

Riley, armed with a knife and intoxicated, was unresponsive to officer’s commands, and made aggressive remarks and actions that led to five shots being fired, three of which came from an AR-15 assault rifle. It was over just 15 seconds after the police arrived.

The shooting, later deemed lawful by Kootenai County Prosecutor Barry McHugh, has continued to be a controversial subject for members of the community who feel the response was unjustified when it involved a person with mental instabilities.

One such member, Dan Mimmack, has scheduled a memorial service to commemorate the one-year anniversary of Riley’s death.

“I’ve always felt that law enforcement should be held to a public standard of decency that the community sets,” said Mimmack. “I didn’t feel the reaction was justified—how it was handled in the beginning, the report to the police that caused them to arrive with lights and sirens on high alert. They didn’t get enough information to know who they were dealing with.”

Mimmack laments the fact that Riley wasn’t initially reported as mentally unstable, a fact he feels might have helped the police officers to respond more appropriately.

“They ended up in way too close of range to have a plan B,” he said. “Their plan should have been to talk her down, to deal with her as a suicidal person … in the scenario that they created, they had no choice but to gun her down for their own safety.”

The memorial will take place behind First American Title, directly across from where the shooting occurred on Alder Street. There is a white ribbon hanging from a telephone pole marking the location, which Mimmack hung shortly after the incident.

“I called the manager of the branch and asked if we could get permission to gather on their back private property,” said Mimmack. “They gave us permission to use the space.”

Mimmack and co-sponsor Jodi Rawson said the site will be roped off and there will be a few speakers, a moment of silence, music and flowers laid on the sight of Riley’s death.

“The idea is that next time, we don’t do this again,” said Mimmack. “We learn from the pain of this. Jeannetta shouldn’t die in vain.”
The memorial will take place Wednesday, July 8, at 6 p.m. in the parking lot behind the First American Title building (the old library).