May primary voting to be absentee ballot only

Gov. Little declares all Idahoans must vote by mail for May 19 primary

Idaho Secretary of State Lawrence Denney announced April 1 that all Idahoans will vote in the May primary using absentee ballots.

“In order to keep Idahoans safe amid the growing global health pandemic and protect their right to vote, Idahoans will vote in the May primary exclusively from home using absentee ballots,” Denney wrote in a release. “If you want to vote in the election, you will need to request your ballot online at Idahovotes.gov or contact your local county clerk.” 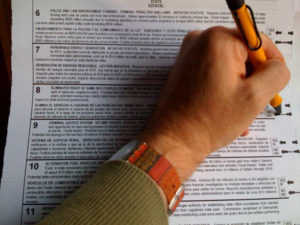 Denney claimed that due to the growing number of coronavirus cases in Idaho, it was not safe for voters, election workers or the larger community to hold in-person voting for the May primary.

“Having Idahoans request an absentee ballot and vote from home will protect the health of Idahoans, slow the spread of COVID-19, allow the election to move forward as scheduled and ensure that everyone can still exercise their right to vote,” Denney wrote.

To vote in the May 19 primary, Bonner County voters must request their ballot from the Bonner County clerk or online through the Idaho Secretary of State’s website by May 19. Once the ballot arrives at a voter’s home, they may simply fill it out and mail it bank using a pre-addressed envelope.

“We will be sending an absentee ballot request to every registered voter that has NOT already requested a ballot for May, so if you can’t acces IdahoVotes.gov, you don’t need to worry,” Denney wrote. “We will send you a request form to your registered address by mail in the next roughly 10-14 days.”

Denney urged voters not to way until May 19 to request a ballot or to vote.

“You can start today,” he said.

Voters who would normally request assistance for voting or who have accessibility concerns should directly contact the Bonner County clerk’s office to discuss what accommodations may be available.

The filing deadline has passed for the May primary election, leaving only two contested local races.

Incumbent Bonner Co. Commissioner Steven Bradshaw, a Republican, will face three challengers in May for the District 1 commissioner race. Joining Bradshaw on the Republican primary ticket are Jason Giddings and Butch Horton. Steve Johnson has filed as a Democrat.

Giddings, a Republican is a Ponderay resident who is the CEO and President of TransluSense, which manufactures glass keyboards. He has served in the U.S. Army.

Horton, a Republican, is campaigning on “clear vision and good judgment,” calling for “more cooperation and accountability and less conflict.” Horton is a former U.S. Navy operations specialist and current business owner who listed natural resource management and responsible land use planning as some of his main policy targets.

Republican incumbent Bradshaw is nearing the end of his first term as a Bonner County Commissioner after beating out incumbent Glen Bailey in the 2018 primary election. He is a pastor at the Cocoalla Cowboy Church who lists as his main issues, “pro-life, pro-Second Amendment, pro-common sense, pro-limited government and pro-God.”

Three Republicans have filed to run for the seat vacated by eight-term Representative Paul Shephard, R-Riggins in legislative District 7, which spans from Salmon River country all the way to the northern Panhandle in Idaho.

Shephard’s son Charlie Shephard, a Republican, has filed for the District 7 Seat A race. Shephard is a longtime coach at Salmon River High School.

Also on the primary ballot for District 7 is Orofino Republican Dennis Harper and Sandpoint Republican Cornel Rasor, who previously served four years as a Bonner County commissioner who claims to be a “staunch defender of individual property and Second Amendment rights.”