MakerPoint Studios returns with a bang

When Matt Williams and Mike Peck announced they would be closing the popular MakerPoint Studios last month, the maker community reacted with sadness. The do-it-yourself design studio had built a community of makers, tinkerers and crafters around it – many of which had a hard time accepting the shop’s fate.

So, they did what makers are known to do: Make stuff happen. 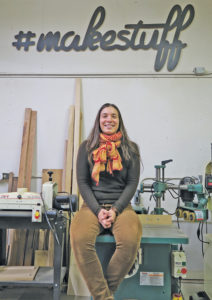 Alexandra Iosub is all smiles in the MakerPoint Studios under the famous sign #makestuff. Photo by Ben Olson.

“This place has had such a huge impact on the community,” said Alexandra Iosub, who has been a member at MakerPoint for a couple years. “It’s just too loved to fail.”

Iosub’s story with MakerPoint illustrates how the studio has formed a community out of raw space. When she first moved to Sandpoint a couple years ago, she built a tiny house not far from the studio.

“MakerPoint was one of the first places I visited in Sandpoint that made me feel welcome,” she said. “The guys were so friendly.”

Iosub made her countertops at MakerPoint, then used the CNC router to cut out her front door. She learned woodworking from Mike and Matt and crafted her own storage boxes.

“Mike and Matt taught me a lot, and now they’re family,” she said.

Iosub and a group of makers recently held a meeting with one goal: to save MakerPoint.

“Somehow, out of the ether, a plan showed up,” said Iosub. “We asked Mike and Matt if they would sell the business to us, we settled on a number and it happened. We just signed the papers today.”

“This is a celebration of what Matt and Mike built over the last couple of years,” said Will Crook, who has been tapped to handle financial matters for MakerPoint.

“I’m super proud that it’s going to continue,” said Mike Peck, who recently began working for Sandpoint company Kochava. “This is the best way it could’ve transitioned — with a group of members who want to keep it alive.”

The next iteration of MakerPoint will be organized as a not-for-profit, modeled around the idea of a co-op. A proactive group of supporters have stepped in to ensure it continues to serve the community. Iosub will handle education, outreach and marketing. Henry Edwards will be in charge of running the shop day to day. Crook will handle financial matters, while Jon Dodge will act as team leader. Tony Russo will deal with everything legal. Last but not least, Staci Schubert was a moving force to pull the group together to make a team.

MakerPoint will host an open house on Sunday, Oct. 22 at 1 p.m. for those who would like to check out the shop at 1424 North Boyer Ave. (near PSNI and The Cottage Thrift Store). There will be live music, food, a raffle for memberships and classes offered.

When going down the list of features MakerPoint offers, it might be easier listing what the studio can’t do. 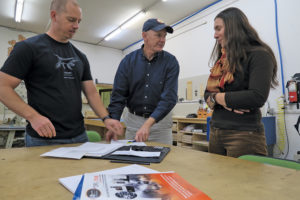 At the center of the studio is the CNC router and plasma cutter, which is a computer controlled cutting machine that produces high-quality work. Simply set the parameters of your design and the CNC router will do all the hard work, producing factory-quality work without the factory.

The studio also features two laser cutter/engravers, a fully equipped digital computer room, 3D printers, a textile area including industrial sewing machines, embroidery machines and silkscreen room to produce T-shirts. There are also wood and metal shops fully equipped with professional tools and an electronics desk. The use of all tools and hardware can be taught by the diligent MakerPoint staff.

The group plans to keep most aspects of the studio the same. Full access memberships go for $149 per month, while plans offering lesser access are available for closer to $80 per month. Veterans get an automatic 50 percent off the full access plan. There is also a punch card available, with each punch equaling one certification or day entry.

While MakerPoint is a great studio for hobbyists, it’s also a source of income for many.

When Staci Schubert started going to MakerPoint, she had no idea that she would eventually develop a product line to sell. Schubert recently opened a storefront in Sandpoint called SXS Leather, 301 Cedar St. #105, where she produces and sells her own line of leather jewelry, bags and accessories.

“It was at that point in my life that, personally, (MakerPoint) was my church,” said Schubert. “It was a place where I would go, an outlet for me in a positive way. It can be that for some people to go and forget about whatever else is going on in your life. It just so happened that I created a product line out of it.”

Schubert made 100 percent of her product line at MakerPoint, but has now outgrown the shop and purchased her own laser.

“That’s what a makerspace is all about,” she said. “You develop your niche, experiment, learn, then you go off on your own.”

As far as outreach goes, MakerPoint plans to continue offering classes to anyone interested in learning the art of do-it-yourself. The studio has collaborations with Sandpoint Parks and Recreation, the Sandpoint Library and is working on a cooperation with North Idaho College. Iosub wants to begin a “tinkering school” for schoolchildren, which is like a kids’ camp where they play and build with hand tools. At the core of it all is the idea to promote the philosophy of the makerspace.

“I’m a maker and want to be a maker,” said Iosub. “I don’t want to just be a consumer. This shop brings people together who have skills and creativity to keep doing what they are doing. They have a chance to solve problems that plague us. Our culture encourages actions that are not sustainable anymore — consuming and consuming. Makers are the future, I think.”