Okay, I could do without that one.

To celebrate the wild weirdness of nature, evolution and prehistory, let’s look at a handful of weird dinosaurs that probably went extinct for several reasons; giant space rocks and global calamity being somewhere in that list. 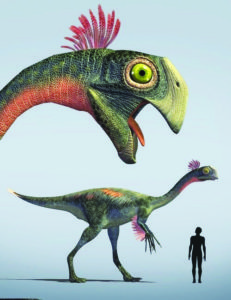 Gigantoraptor: “Jurassic Park” would’ve been a comedy if these had been the movie’s villains. These goofballs could get over 20 feet long and weighed as much as a hippopotamus. Their bones were also hollow, much like the birds we know and love today. The funniest thing about this guy was he was built like a chicken, and probably moved exactly like a chicken. The strutting, the head-bobbing, the twitchy glances and all. Being a bird that big, imagine the delicious breakfast you could make from its eggs.

Guanlong: This thing probably looked a lot like the dilophosaurus, famous from “Jurassic Park” for being that frilly thing that spit on Newman. Except it was covered in weird feathers that resembled a Silkie chicken’s feathers. If you’ve ever seen a Silkie chicken, you will burst into frightful laughter at the thought of a 10-foot Silkie trotting your way. Guanlong had a frill on its head that it could likely push blood through to create dazzling spectacles of color to attract mates. I sure wish we evolved with that; reality TV would be way more fun to watch.

Terror Bird: No, I’m not talking about the cassowary. In fact, I’m not even really talking about a dinosaur here, but it’s an important piece of the evolutionary puzzle. It helps illustrate how we went from fearsome apex predators to canaries. It was a ten-foot tall bird with a massive beak and an insane ability for running. The coolest thing about the Terror Bird is that it survived for at least 60 million years (well, as a species. It’s not a wizard.) The not-so-cool thing about it is that our ancestors were likely the reason it went extinct. You thought a 15 pound turkey took a while to cook once a year, one of these guys could feed a small town.

Deinocheirus: Seriously, what the heck is this thing? It’s like if a camel and an anteater had a night of drunken revelry with a feather boa. It has a hump on its back, super elongated arms, a funny-looking head and weighed SEVEN TONS! On top of that, it seems to have had featherless legs up to the thigh joint. It’s a relatively new discovery, with the first full skeleton having been found in 2014.

Cryolophosaurus: Finishing out the list is the prettiest princess, a 20-foot long carnivore that likely resembled the Allosaurus, except it had a bony growth on the top of its head that looked like a little crown. That’s not even the weirdest thing about it. The weirdest thing is that its fossils were found in Antarctica. This tells us two important things: Antarctica was somewhere different between 200 and 140 million years ago, and the world was, at one time, a considerably warmer place. In fact, scientists believe that most of the continents were pretty much on one whole side of the planet, which must have altered the tilt and rotation of the planet, which in turn would have altered global climates and allowed things like this princess to live comfortably in a place like Antarctica.

Our world is a curious place. We can learn a whole lot about it when we look at where it’s been and what else has walked around on its surface. Especially the weird stuff!