“You won’t BELIEVE what we’re talking about today.” “Here’s 10 COOL THINGS to look for…” 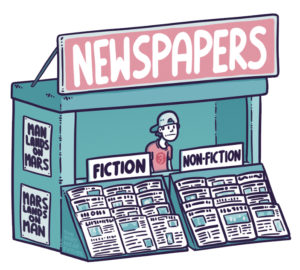 Fake news has been something of a buzzword in the media lately. It’s scary, and it makes you question the legitimacy of everything you read, but you might be surprised to know it’s not new at all.

We’ve been spreading fake news for as long as we figured out lying to other people can be occasionally profitable. So, what exactly is fake news, and why does it matter?

Contrary to what some people believe, news isn’t fake just because it disagrees with your opinion. Here are some telling signs of fake news:

It’s sensationalist. Does the headline go out of the way to really grab your attention and pull you in? Does it seem too good to be true? Usually, this attention-mongering is followed up by a fairly mundane, meandering article. Did it get you to buy the paper it was attached to? Then the title did its job.

It’s poorly researched. Research can be time-consuming, but anything you’re curious about is a quick Google and CTRL+F search away. If a news article seems too good to be true, check their sources.

It is extremely biased. Heavily biased articles use language in a way to appeal to someone with a certain set of beliefs and enrage another. It is intentionally controversial and divisive, and will often omit or fabricate details in order to appeal to one side or another, left or right. We rarely get everything we want in life, and if our news source only validates us, we’re missing lots of important information.

Fake news has had many different names throughout history. (“Number 3 will BLOW YOUR MIND…”)

Yellow journalism. Coined in the 1890s, it was dubbed this at a height of a journalistic war between William Hearst’s New York Journal and Joseph Pulitzer’s New York World, characterized by loud, bold titles and fantastical illustrations designed to draw readers into otherwise uninteresting news. It was dubbed “yellow journalism” because of the yellow ink used in the publications. This would later evolve into tabloid journalism you see at the supermarket today.

Propaganda. This is a broad term for massive campaigns run through the 1900s. The Soviets were infamous for their extensive use of propaganda media blitzes, which was ironically reused by the American government as a counterpoint in its own propaganda. A propaganda media blitz was characteristically a bombardment of inescapable patriotism and fear tactics mixed into news cycles. Modern fake news and traits of “post-factual politics” take traits of early propaganda by appealing to fear and other emotional responses rather than facts and reason.

Clickbait. This is a new form that serves an old purpose (with a few new twists). Catchy, easily-accessible links on websites pique your curiosity and get you to click on the article. When you click, you generate traffic for the website. Advertisers pay the website for every click the website generates. Some websites will also hide malicious code into the page that will take over the page and demand immediate action under threat of something bad. “Click this NOW or your information could be sold to Russian hackers!” That is called scareware, and the action of clicking anything will usually install additional malware on your device, which will be sold to a third party regardless of your actions.

Satire. Though not as malicious as the other types of fake news, it’s important to identify satire news articles from websites like The Onion, which makes fake news articles for the sake of entertainment (they’re usually pretty funny). However, some people struggle to differentiate satire from real news, as was evidenced when an article was circulated in warning by John Fleming, a congressman from Louisiana, about Planned Parenthood opening an $8 billion dollar “Abortionplex” with The Onion as a source.

On its own, fake news doesn’t seem like a very big deal, but it has a snowball effect. If you read something that scares you, it’s your instinctual response to let someone else know. This either assuages your fears, or alerts members of your tribe that something is wrong. You tell two people, who tell two people, then you quickly start dealing with exponents, and suddenly a story about Chuck Schumer using heat vision to blow up a bus full of orphaned sea turtles can escalate from ridiculous to blood-in-the-water media frenzy.

Luckily, you can protect yourself from damaging fake news. “You won’t believe what happens next…”

Check the title. Have you noticed what I’ve been doing through this whole article? It’s an old yellow journalism trick to give you a taste in hopes you’ll come back for the payoff. If it’s too good to be true, it probably is. Listicles are a popular form of clickbait that use this trick to keep pulling in traffic.

Check the source. Is it a trusted outlet? Does it have an obvious political tilt? Does the author even exist? If they can’t fit sources in print, an image should always have a source.

Read more. Sharing an article after only reading the headline is the primary way fake news spreads.

Ask a librarian. Our primary job description is to research stuff. If something seems hokey or too good to believe, ask us about it! We can equip you with all of the tools and knowledge you need to combat a fake news epidemic.

Interested in learning more? Come give us a visit at the library. Mike Bauer recently hosted a series of programs discussing and highlighting fake news. If you missed out, give us a visit and let us know you’d like another program. With enough interest, we could run another series.