Energy is a hot button topic in the crucible of politics and social commentary right now. Clean energy, cheap energy, what’s best for the planet versus what’s best for our bank account. Long story short, it’s a giant convoluted mess and a winding labyrinth of personal interest and conflict that ultimately boils down to human profit, both on a macro (GDP of entire countries and global economies) and micro (personal workers, towns and communities). 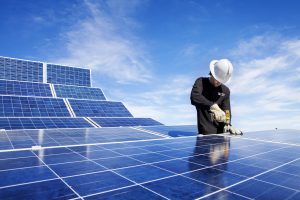 You may want to power your entire city block on reclaimed cooking oil that somehow cleans the atmosphere while it powers your home, but your friend Roy at the coal mine could lose his job because that makes his position obsolete.

This is the conundrum we as a country, and as a species are at right now. It’s much more complicated and affects a lot more people than a couple of southern billionaires and their sheikh buddy in Saudi Arabia.

Lucky for you, this article has already passed the myriad of social and economic problems to focus on one simple thing: What is energy?

Energy is something that can be transferred to other objects or converted into different forms to, as perhaps the greatest scientific minds in the history of our great nation, Rob and Big, put it: “Do work, son.”

What does it mean to do work?

It can mean almost anything. In the most tangible of forms, we quantify energy into joules. No, not the place you went to for lunch (though we’ll go over that later. You know my rampant obsession with tacos), a joule is defined as the amount of energy transferred through mechanical work to move an object one meter against a force of one newton.

Not a Fig Newton. One newton is the force needed to accelerate  one kilogram of mass at the rate of one meter per second squared in one direction.

Yeah, well context is important, so suck it up, buttercup!

As the internet puts it: “tl;dr” (too long, didn’t/don’t/doesn’t read): a joule is a basic unit of measurement for energy that helps us understand how things move/do work..

If you’re feeling lost or afraid, fear not! Mad About Science lists are here and ready to blow your mind.

What can one J (abbreviation for joule) do? It can heat 1 gram of cool, dry air by 1 degree, C. Well that’s uneventful!

Let’s move up to what we call a kilojoule, or kJ. As our Canadian neighbors laugh at us for not knowing the metric system, that’s 1,000 joules (10^3 J).

1.8kJ is the amount of energy released by an M16 bullet firing at 960 meters per second. To think that you did all of that with just one squeeze of your index finger!

To put that into perspective, and how mass and weight can vastly change the outcome of something, the world record hammer throw required almost twice that energy: 3.4kJ, just to make the hammer go 30.7 meters per second. Throwing hammers sounds pretty fun.

Moving up to megajoules (10^6 J), you see a familiar phrase if you pay the electric bill: 1kWh, or 1 kilowatt-hour, which requires 3.6 MJ. To put that energy use in perspective, you could watch 6 episodes of Orange is the New Black on your HDTV before consuming 1kWh of power.

Now to balance that against how much energy your body uses in a day, the average 2,000-calorie diet contains about 8.4 MJ of energy. Instead of eating, you could watch nine episodes! But come on, what’s binge-watching without binge-eating?

Going past that, a term most of us have heard is gigajoules (10^9 J or GJ). We’re familiar with this term because there is a little over one GJ in a bolt of lightning.

Putting that into scope, a 16 gallon tank of gas has about 2.2 GJ of energy inside of it. If you’re wondering why your car doesn’t just erupt into a glorious display of divine fury, it’s because the tank is depleted slowly over time (and also pushing an object weighing at least a thousand pounds around for miles at a time), and not all at once in a fraction of a second.

Let’s jump up a few orders of magnitude here to get to more interesting stuff. A petajoule (10^15) is roughly the amount of energy released by your average thunderstorm, which is more energy than the kinetic energy of the International Space Station, a 417-ton mass of steel and science moving almost five miles per second.

Skipping even farther ahead, we look at the largest order of magnitude we have a name for: yottajoule (10^24 J). 5.5 YJ of energy from the sun hits the face of the Earth every year. Multiply that 4.5 billion and you have about the total energy that’s hit Earth since it formed. That’s a taco or two.

Past this point, we really don’t have words to describe these awesome levels of mind-bending energy, just numbers.

Any idea how much energy is in a solar flare? It’s 10^25 J. That’s a staggeringly huge number. Can you count that high? That’s 10 septillion, in case you were wondering. That’s also 1,000 times the amount energy that Earth receives every year!

All right, Brenden. It’s time to wow me. This has been a great number dump or whatever, but I’m wearing socks, and I want you to blow them off with these Joules you’re talking about.

Fair enough. You remember when you saw that T-shirt that had the doctor from “Back to the Future” and it said E=mc^2 and you thought it was like a funny meme or something?

Well, that was Albert Einstein, one of the most brilliant people to ever live in the history of humankind, and to blow your mind, I have to break that down for you.

According to Einstein’s famous Theory of Relativity, E=mc^2 means Energy equals mass times the speed of light squared. This implies that all mass contains an immense amount of energy. When we’re talking about things on the scale that we’re about to discuss, we have to talk about them together (Well, we don’t have to, but it’s a lot easier to.). We’ll refer to this as mass-energy equivalence, or mass-energy.

The mass-energy of the entire Milky Way galaxy, including dark matter (projected, of course), is 10^59 J.

That’s 59 zeroes. That is NOT barely double a solar flare, exponents don’t work like that.

An ejection of energy larger than all of the energy the Earth catches in a year 1,000 times over is 34 zeroes away from being a single percentage of energy in our galaxy.

Did I forget to mention that we think there are at least two trillion galaxies in the universe?

It’s not a very small world out there, after all!