In the final installment of our aquatic monsters series, the weird name parade continues, but don’t be fooled. The Dunkle isn’t a clown, and is most definitely not your run-of-the-mill fish. 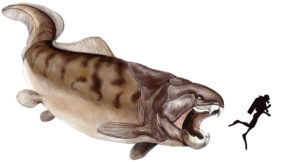 A dunkleosteus, with a human scuba diver to scale. Swim little diver, swim!

Here in North Idaho, we love to fish. Bass, pike, trout, you name it. One of the best sport fish we’ve had around here is probably the tiger muskie, and anyone that’s caught one knows that it’s one hell of a fighter and a biter.

Dunkleosteus puts them to shame. SHAAAAME!

You’ll find out why very soon.

Dunkleosteus lived as far back as 382 million years ago, putting its existence around the time of the first forests forming on Earth; not that such a thing matters to a fish, I just thought that was pretty cool factoid.

During this time, Earth was split into two major continents to the north and south, but was still mostly water, leaving lots of space for Dunkle to roam around. Dunkle needed a lot of space; after all, it was a fish that could get up to 33 feet long. You know we like to talk about giants!

Dunkleosteus was doubly cool in that it wasn’t just giant, but also heavily armored. Most of the fossils we have are of its head, which was a series of shell-like bony plates. Because of this, we’re guessing that it didn’t have a whole lot of natural predators, but that it wasn’t particularly fast, either.

This monster’s bony head was one of its most noticeable features, and the way it was constructed allowed for what will single-handedly be the coolest thing in this article: Its incredible bite force.

Based on computer simulations of Dunkleosteus’ skull, scientists project that its jaw could exert forces of up to 11,000 pounds. A crocodile, meanwhile, exerts about 3,500 pounds of bite force. The fish didn’t have teeth, per se. It had plated bones that acted like a beak. These bones were pointed in a way that allowed Dunkleosteus to multiply its bite force at least eight times over into a single point, which we believe it used to shear its prey completely in half.

You know the paper shredder at your office? Form it into a curved slope and a singular point, scale it up to about five feet, put a motor on one end of it and use it to guillotine your ham sandwich. Or, you know, a cinderblock, because Dunkleosteus had the bite force to turn a cinderblock into chunks and powder.

So, let’s say you’re an extreme sports fisherman with an affinity for adventure. Let’s also pretend that you have a time machine, because what extreme angler doesn’t travel through time to get the very best trophies?

You’ve targeted the massive Dunkle (you can tell I love saying that, right?) as your next big trophy. What are his stats? What are you going to need?

He’s a fish that eats other fish (piscivorous), so you’ll want some sizeable fish as bait.

He has a very armored head, so the success of harpoons is questionable.

He also has a bite force that can mash concrete like a baked potato, so unless you plan on using a tungsten hook and cable, firing harpoons out of a cannon may be your best bet after all.

Oh, and he also weighs about four tons, so you’re probably going to want to get a winch. A really, really big winch.

Man, you are one hardcore sports fisherman.

As I’m sure you’ve noticed, such a terrifying display of biological power isn’t floating about the seas today. What happened to good ol’ Dunk?

They had a good run of about 40 million years, but they met their end from what we believe may have been a changing climate. We don’t have all the answers to this for a few reasons: One: It was a REALLY long time ago. Two: This particular extinction event seemed to primarily affect oceanic life, as forests and insects were flourishing on the surface. One of several of things could have happened to cause the climate to change and become inhospitable for Dunk and his friends: A comet could have struck Earth (way more awesome than an asteroid because it’s ice) and altered the chemical makeup in the oceans. Volcanism could have increased and altered the atmosphere and/or the oceans. Life could have reached some kind of tipping point where it altered its own environment or any combination of the above. We’re not entirely sure, but it does have a name: The Late Devonian Extinction.

I know what you’re thinking, the Dunkleosteus must have whipped it, whipped it good.

Extinction is a pretty abysmal prospect. For every species that has gone extinct, there has, at one point, been one sole member of its species left standing upon the Earth, taking its last gasp without ever having successfully reproduced. I mean, that’s kind of the definition of extinction.

In some cases, this worked out in our favor: Do you really want a 4 ton, 33 foot long fish that could eat boats swimming around the oceans?

In others, it could be a chain reaction of events leading to the last member of our own species taking that final breath.

Luckily for us, we’re smarter than that (hopefully). We have the intelligence and the tools at our disposal to stop that from ever happening, as long as we aren’t so dumb as to squander those assets on frivolous and petty things in the now.

Our immediate future on this planet is tenuous. In the long term, if we are going to stay on Earth we will go extinct. That’s not an if, that’s a when, and if we somehow defy all odds and beat every form of climate change, live underground, and figure out a way to live without water, we have about 1 billion years before the Sun reaches a state where it will devour Earth.

Trust me, we don’t want to be around for that.

Unless we want to hang out with our good ol’ buddy Dunk in the great dark beyond, maybe we should start looking at some celestial real estate in our stellar back yard? Once we get that far, getting out of the solar system and into brave new worlds before the Earth becomes extra crispy is just a hop, skip and a Dunk away.