The crossbow: one part gun, one part bow, 10 parts awesome. So good at maths. 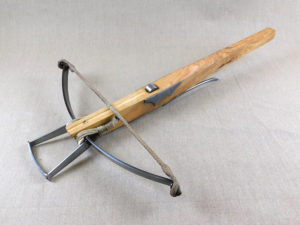 When you think of a crossbow, you probably imagine a soldier from the Middle Ages. That’s fair: It was a highly popular weapon while we were all dying of plague, and there are reasons for that, but it’s actually much older. Archaeological evidence suggests armies in eastern Asia may have been using crossbows as early as 650 BC. They’ve even found triggers and other bits and pieces with the Terracotta army.

It may surprise you to know that the Greeks used crossbows as well, which would later be developed into ship-mounted ballistae — artillery big enough to sling leg-sized bolts through ships and city walls. The Romans would go on to adopt this technology as well.

So why were ancient cultures so crazy about crossbows? All of the great myths have dudes (and dudettes) shooting a bow, but you don’t often hear about great gods firing some mechanical contraption. A bow took a considerable amount of work to shoot accurately. It took practice, strength and endurance to be able to keep firing. J-Law and Stephen Amell make it look like child’s play on the screen, but firing arrows accurately for hours at a time will wear you out, and it takes a lifetime of practice to get good enough to pull off shots while moving or being shot at.

As for a crossbow, it’s as easy as point and shoot.

In gods, our ancestors saw strength and skill with a bow to be testament to their immense powers. On the battlefield, generals preferred being able to marshal an entire army inexpensively while still maintaining a semblance of deadly precision. When they had bowmen, they were a lifetime investment, and losing one meant you had to start all over; if your crossbowman died, his friend could just pick up his crossbow and hand it to someone else as easily as I pass you a game controller.

That is, if we’re playing on a couch while actually being shot at.

The way that a crossbow works is pretty simple. You set the trigger, which locks against the nut in the stock. There’s a notch in the nut so you can pull the string back through it. This is where the energy transfer happens, by drawing back the string you’re also pulling back the lath, or the bow arms and converting mechanical energy into potential energy. When you pull the trigger, it allows the nut to roll forward and let the string slip out of the notch. Once that happens, the stored energy is released and the string hurls the bolt downrange, transferring some of that energy into kinetic energy, which carries the projectile.

Outside of a high school physics classroom: When you pull the trigger, the string is released and flings the projectile at the target, then everyone cheers as Daryl bags another walker.

There were even some designs for repeating crossbows, a weapon designed so that all you’d have to do is re-draw the string, as another bolt would fall into place to fire after the first vacated the chamber. Rather than using spring-loader mechanisms or expended gas, ancient engineers were wise enough to let gravity do all of the work. Whether or not this caused frequent jamming is anyone’s guess.

In the days of old, a crossbow was generally made of wood, as it was flexible and did a good job of storing a lot of mechanical energy, while also being cheap to produce. Nowadays, most crossbows are made of a carbon composite material, plastics and metal. A high-end hunting crossbow is capable of firing a projectile at 350 fps (feet per second). I couldn’t find information on the projectile speed of a medieval crossbow, but I did find some cool videos on Youtube of dudes firing them at suits of armor.

Long story short, you really don’t want to be on the receiving end of a bolt. It doesn’t look fun.

It might surprise you to know that militaries around the world still use crossbows. You won’t see Marines dropping hostiles with them, though. A weapon that spits out 30 rounds of searing metal in a few seconds vastly outperforms your measley three to six bolts per minute. However, they have other specialty uses. Let’s say a narrow alley seems like it could be a hotbed for tripwires or other IEDs. Rather than just trying to creep through it, soldiers use crossbows that fire grappling hooks, then drag them back with a reel. The hooks are designed to catch rogue tripwires and detonate the devices with no loss of life. Like fishing for explosions.

Soldiers in Central America use them to set zip lines in the jungle for rapid downhill travel, which sounds super fun.

During World War I, the allies used a special crossbow called a Sauterelle that was designed to lob grenades into enemy trenches. It wouldn’t take long for the armies of either side to figure out it made more sense to launch them with explosions and created mortars for that purpose instead.

Do you own a crossbow? Ever go hunting with it? Personally, I haven’t, but after a little research, I sure can see the appeal!