‘We can coexist peacefully’

We are living in a time of uncertainty. And so are wildlife. Consider the Canada geese at Sandpoint City Beach Park whose future is dire.

As if last year’s removal and relocation of 144 geese wasn’t invasive enough, this year’s plan is deadly. Nearly 50% of the relocated geese returned within a month of capture, and this year in June, while molting adults and their young are flightless, the city plans to round up and kill up to 150 previously leg-banded adults, along with their 4-6 week old goslings. The very young can’t exist without their parents even though the broods regularly mix. Juveniles stay with their parents up to a year.

Then the city will proceed to capture up to 200 more birds, leg-band all but the smallest, and relocate them all somewhere else. The public records don’t show where, but most likely south of Coeur d’Alene again, although some experts feel that moving them north makes more sense. 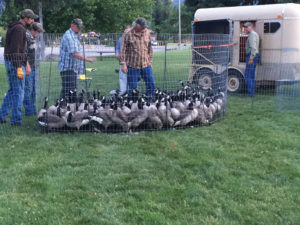 Destroying families of geese, adult pairs that mate for life and their young? I’m sorry, but aside from the pandemic, my compassionate City of Sandpoint has lost its moral compass. It is poised to annihilate a wildlife community. Instead it needs a change of heart.

But 2020’s scenario is only if the city’s 2020 permit application for this inhumane plan is approved. It is currently under review by the Portland office of the U.S. Fish and Wildlife Service (503-231-2271). USFWS is the federal agency that normally protects wild migratory birds like Canada geese, but with good cause will allow depredation. I reviewed the city’s sketchy application.

The city claims that the geese are a safety and health hazard — despite providing no supporting data or health complaints — and that geese fecal matter has a negative impact on the economic engine called tourism. No economic data required by USFWS was provided to support this claim. There are other shortcomings, like counting large numbers of geese in October and November that are simply migrating through.

Last year I spent dozens of hours researching, interviewing wildlife managers and biologists, investigating park practices in Coeur d’Alene and Nelson, B.C. Several others got involved and we discovered several effective nonlethal options being used in other places. We repeatedly tried to convince the Mayor and Sandpoint City Council in limited, three-minute statements, to reopen the issue for scientific biological review, more citizen participation, and to consider nonlethal options. In addition, we made phone calls, wrote letters, and editorials, garnered front-page press, and letters to the editor, and submitted petitions. We pleaded to put the plan back on the agenda.

Instead, we still have this ill-conceived, 3-5 year plan which our newly elected council members have never weighed in on. Sandpoint Parks and Rec director, Kim Woodruff, who has no biology background, and his committee are driving the plan. The city is tired of dealing with geese and their excrement. There’s the fake coyotes and dog hazing which works but needs to be consistent. If you examine goose poop, it is composed mostly of water and grass, which breaks down quickly. The city’s expensive raking machine for the beach has tines so far apart that they just break up the feces into smaller pieces and then mix them into the sand. It’s not enough.

We recommended Geese Peace, which involves locating nests and addling (oiling) eggs so they don’t hatch. It’s like birth control for prospective geese parents. Too late for this year, it would be dollars better spent by the city than paying USDA Wildlife Services to repeatedly kill native waterfowl. Instead, the city continues to consult with, and then hire this agency to handle the dirty work. It’s like paying the fox to help you manage the henhouse.

The city could also revise the 25-year-old dog ordinance that prohibits dogs at City Beach. Simply allowing dogs on leash only, like in Nelson, B.C., would do an amazing job of keeping the geese off the beach and grass where they feed and rest. All geese go to water at night. They permit dogs at the Windbag Marina, so why not the rest of the park? Today I observed a man with a dog on leash approach a dozen or so geese couples, who alighted when the leashed dog was within 25 feet. Dogs would be a cheaper, more effective way to keep geese from feeding on the lawn. Sandpoint is a dog loving town.

One local resource person, with years of experience in geese management, told the city early on that the plan wouldn’t work. Biologists we spoke with concurred. Each year, new geese from the ecosystem would fill in, because that’s what geese do. So why continue this insane plan? Is it primarily worry over tourism which drives much of city policy?

Capture, and kill and capture, hasn’t and won’t work. It’s time, especially now with the pandemic, for the Mayor to issue a moratorium on this year’s expanded lethal geese plan. And then create an ad hoc citizens advocacy committee to deal with geese management at City Beach and other city parks. There are more humane, compassionate ways to deal with unwanted geese feces. We can coexist peaceably.