Hello! My name is Brenden. I’m sure you’ve seen me and my crazy, borderline sentient beard around the library recently.

For a little background, I am a science geek. A huge science geek. Alas, growing up, I found learning about science to be difficult, even boring. Past generations couldn’t convey the sense of awe and wonder required to really do the subject justice.

That’s why I’m not going to bore you to death with textbook lectures, confusing conversions or dull, meaningless facts.

Okay, maybe a few meaningless facts, but they won’t be dull!

Let’s get started: What could be the least dull, least boring, most mindblowingly awesome thing you can think of in under five seconds? 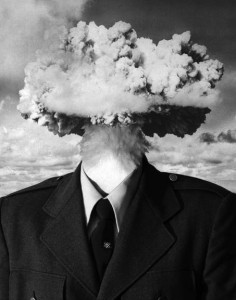 Explosions are what happens when something reactive comes in contact with heat, electrical energy or in the case of chemical reactions, a catalyst. Kaboom!

When you think about an explosion, you probably think about fire scorching things and doing incredible amounts of damage. This is only partly true. The greatest amount of damage from almost any explosion comes from the shockwave, which is a surge of energy released that travels farther and faster than the fireball. That’s why, when you see old footage of nuclear bombs being tested, the buildings rip apart before any fire actually touches them.

What’s even cooler than an explosion?

How big are we talking about, here? Let’s start with your typical household firework. It can fit in your hand, which makes it portable, and it can blow up small things, which can be pretty awesome. Depending on what other chemicals they put into the firework, they can also be really beautiful, or really loud, or really unpredictable.

How about a stick of dynamite? Those little red tubes you always saw cartoon characters slinging at each other are real, though they’re generally not as they were depicted on TV.

Dynamite, also called TNT (Trinitrotoluene) can be a very destructive source. It has been used for over 150 years to blow things up, level swaths of land, tear down aging buildings and most notably, for retrieving minerals from the Earth. An interesting fact about TNT is that it is so carefully measured and produces such a predictable yield, that the following explosive device is measured in megatons. That’s 1,000 tons, or 2,000,000 pounds. That would be like having 400 full sized pickup trucks made entirely out of TNT exploding all at once.

Tsar Bomba was the most powerful explosive device ever unleashed by humans in the history of mankind. It was a hydrogen bomb tested by the Soviet Union in 1961 that had an explosive yield of 50 Megatons of TNT. Those 400 pickup trucks decided to have a tailgating party and invited 20,000 of their explosive friends, each with their own full-sized truck! The fireball had a 5-mile diameter, almost the distance from Sandpoint to Sagle.

The next type of explosion is so incredibly large and powerful, I don’t have an empirical way to describe just how incredibly awesomely mindblowing and gigantic it is. A supernova (or supernovae when the Universe decides that there isn’t enough awesome going on, and it needs to double down) is what happens when, in short, a star decides that life isn’t worth living in its present state and deducts that it’s time to explode. Luckily for all of us, this isn’t just a random event. It’s part of a very, very long chain of events in what we call a star’s life cycle. This can take tens of billions of years. A supernova occurs when a star has ceased fusing hydrogen, and instead has begun fusing iron atoms. They don’t fuse like hydrogen, the star completely loses it and then it explodes to start the whole process over again from the start over billions of years.

In the next Mad About Science, we’ll learn about crocodiles!