The world’s favorite berry is a curious fruit. Or is it a vegetable?

You may find it interesting to know that, despite the tomato being a staple of their cuisine, Italians actually believed the tomato to be poisonous until the 16th century. That’s because tomatoes are part of the nightshade family, of which belladonna, sometimes called “deadly nightshade,” is a member. Belladonna is extremely poisonous and had been used by numerous European peoples from the Romans to the Germans to create poison-tipped weaponry and deadly additions to noble dinner feasts. 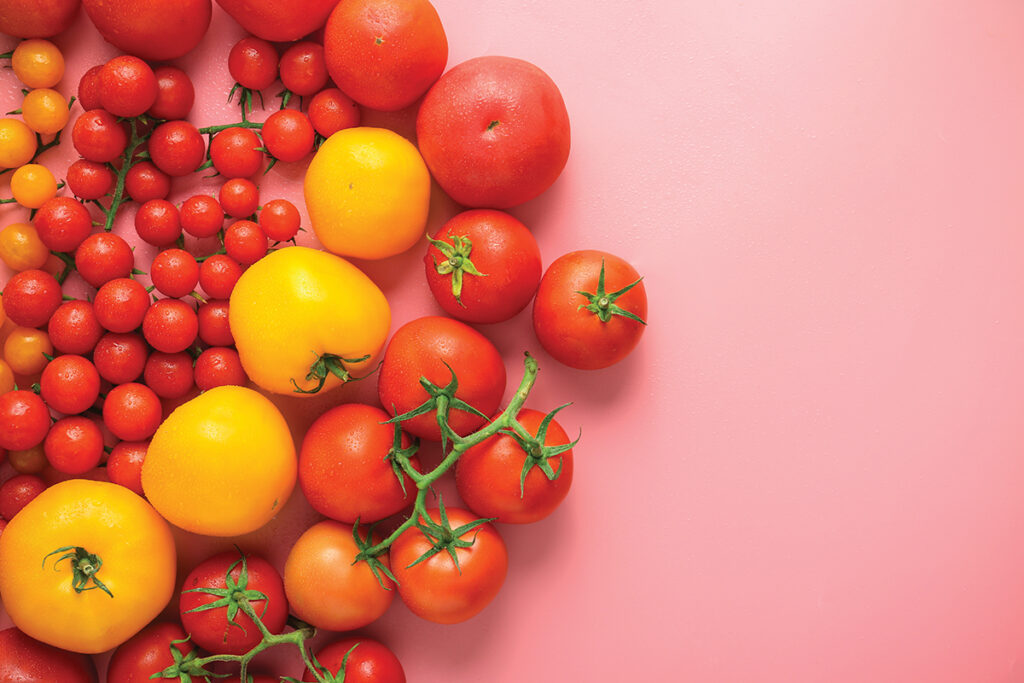 Lucky for us, despite being a cousin to belladonna, tomatoes are not poisonous to humans. Its stem and leaves do contain similar toxic alkaloids as belladonna, but in a vastly smaller quantity. These alkaloids are responsible for the tomato plant’s funky smell, which the plant uses to deter pests and predators. While my chickens have not been put off by the aroma of tomato plants and have eagerly snacked on leaves and tender stems, the deer seem happy to leave them alone — especially once the plants have grown taller than me and begin to perfume the entire garden with that telltale smell.

This odor doesn’t simply exist because of the presence of the alkaloids in the plant; these substances are actively secreted by glands called trichomes on the plant’s stem and leaves. They are the fuzzy “hairs” you see on tomato plants, and they serve multiple purposes. Trichomes help reduce water lost from the stem and leaves by evaporation, as well as having the ability to become roots when the plant is buried — though this trait varies from plant to plant. Some tomatoes will just grow roots from the stem if the stem is buried, regardless of the placement of trichomes.

Tomatoes were first cultivated as food by humans in South America around 700 CE, and were believed to have been introduced to Europe by the Spanish armies that conquered and pillaged the continent. Oddly enough, the English grew tomatoes ornamentally as houseplants throughout the 16th and 17th centuries, but they didn’t often consume the fruit.

Most people have lived their entire lives having only eaten three varieties of the tomato fruit. Beefsteak tomatoes are the most common, frequently sliced and placed on hamburger patties at summer barbecues and fast food joints. Cherry tomatoes, which are most closely related to the very first tomatoes cultivated by humans, are used most often in garden salads. Finally, Roma tomatoes are a medium-sized fruit that have a denser flesh than beefsteak tomatoes and are used primarily for sauces and pastes.

It may surprise you to know that this represents less than one-one thousandth of the total variety of heirloom tomato breeds in cultivation today. Including hybrids and commercial plants, there are at least 15,000 different types of tomatoes worldwide. How many have you tried?

My personal favorite of the hybrid variety is the Lemon Boy, a plump and sweet yellow tomato with brilliant yellow flesh. Seriously, it looks like a lemon, but tastes like a tomato. What more could you want?

Sun Sugar tomatoes are another fantastic hybrid of the cherry variety, producing clusters of small and very sweet tomatoes. These are best enjoyed when mixed with other varieties of cherry tomato, especially red variants that tend to be more acidic to balance the sweetness of the Sun Sugar.

I have a number of favorite heirloom breeds, including the Black Krim, hailing from the Black Sea and the Crimean Peninsula for which it is named. These tomatoes produce inky black to deep purple fruit and have soft and flavorful flesh. They have a similar shape to the beefsteak tomato, but the consistency of a Roma.

Tomato plants are an excellent choice for first-time gardeners, as well as experienced horticulturists. They are hardy and easy to grow, as well as being capable of growing to monumental proportions. Depending on what type of tomato it is, the plant can grow up to 12 feet tall and produce fruit regularly throughout a growing season. I’ve had a few plants reach eight feet before being assassinated by Jack Frost.

Heirloom tomato seeds are easy to gather and save for the following year. Once the fruit is ripe, simply cut up the fruit and strain the pulp to extract the seeds, then let the seeds dry. Some people swear on letting the pulp ferment before extracting seeds, others will simply let it dry before picking them out, but I believe the method of extraction is all personal preference.

It’s important that you only harvest heirloom seeds — don’t try to harvest the seeds from a fruit you bought at the supermarket. Not only can this land you in a mountain of legal trouble if the producer finds out, but this opens the possibility of a new disease taking root in your plants and then jumping to agricultural stock, which could cause a cataclysmic chain reaction that ends in the scrapping of an entire breed of plant.

If you’re curious about jumping on the home gardening bandwagon, it’s not too late. Stop by the library before your trowel hits the dirt and learn everything you need to know from our small town’s massive collection of gardening books. A few short years ago, I counted myself lucky to collect a colander of fruit. Now, I have to build a root cellar to house all of the sauces my wife will make this autumn.