Weird science doesn’t always make headlines, but recently some really heavy news may have masqueraded as clickbait in your social media feed. An Israeli spacecraft that contained a digital backup of Earth’s history on a nickel-plated disc crash-landed on the moon in April. It also had passengers called Tardigrades flying coach inside the spacecraft, intentionally left there and suspended in an artificial amber to preserve them in a living state for what could be billions of years. It would mark the first time in human history that we have intentionally seeded another celestial body with life, something we generally try to avoid at all costs. 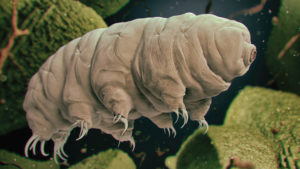 Are you wondering how something could live suspended in amber for billions of years? Let’s take a closer look.

Tardigrades, sometimes called water bears, are small invertebrates with pretty basic bodies. Each one is only about a millimeter in length and their bodies are essentially hollowed out with the sole intention of holding a fluid similar to blood that retains and transports water and oxygen, which is great for them as they lack a complex circulatory or respiratory system like most other invertebrates. Though some parasitic, carnivorous tardigrades do exist, most water bears dine on the innards of plant cells, which they consume by stabbing them with an array of spikes around their mouths and sucking out the insides like a juice box, leaving the cell wall to decompose.

They can also reproduce in a number of ways: the traditional way, best described by Marvin Gaye’s in “Let’s Get it On”; as hermaphrodites, changing genders spontaneously to suit their reproductive needs; and via parthenogenesis, copying their own DNA and cloning themselves. This is one of the traits that makes them extremely resilient.

The trippiest thing about tardigrades is that they can live in the most extreme conditions of the universe. Sort of. Tardigrades can dehydrate themselves, expelling the water from their bodies and entering what’s called a “tun” state, in which their metabolism slows to 0.01%. Amid this state, their bodies can withstand almost anything: scientists have suspended them for upwards of two years at temperatures as low as -310 degrees Fahrenheit, then revived them at room temperature. Conversely, tardigrades have been heated to 302 F, then brought back to room temperature and likewise revived. That’s just about hot enough to cook a tender brisket, which isn’t coming back to life any time soon.

Water bears would only need to remain in this tun state for a couple of decades in the event of some kind of apocalyptic drought scenario, but they’ll have to wait a long longer on the surface of the moon. There is no liquid water on the moon, and the temperature fluctuates on the surface from 260 F during the day to -280 F at night. The moon has a minimal atmosphere that isn’t able to insulate the surface to keep a steady enough temperature to retain water, like Earth.

Lacking a protective atmosphere, the moon is also constantly bathed by solar and cosmic radiation, which strips electrons from atoms and destroys cells in a matter of minutes or hours.

The outlook for the water bears on the moon is pretty bleak. They aren’t able to make tools to build a habitat for themselves to survive, so all they can do is sit and wait. Luckily for them, the humans that put them there encased them in an artificial amber that should prolong their lives indefinitely.

In the event that a super-advanced race of extraterrestrials finds the wreckage of the Israeli lander on the moon sometime in the future, pulling the water bears from their long slumber should be a simple task, which would give them a glimpse into how life on Earth existed and evolved.

The entire English-language Wikipedia from 2017 would also be there, housed on the disc, but whether it would be of any interest to future ETs is highly dependent on their ability to access the data and translate English into their own undoubtedly inscrutable language. Interestingly enough, in that scenario, the water bears would be a better source of information than the entire chronicled history of humankind.

Tardigrades are the only creatures known to have survived in the vacuum of space on their own, and perhaps only one of two multicellular organisms to have left Earth and survived, the other being humans. I bet you never thought you’d have learned something cool from clickbait.