I grew up in the Netherlands and have traveled to 20 countries between 2006 and 2016, but it’s been at least five years since I traveled to a place where I did not know the language. My work takes me to the west coast of Portugal (bummer). On my most recent visit, before heading to the Hotel Palacio in Estoril, I stayed in Parede for a few days, a small town 18 miles from Lisbon. The Airbnb housecat was named Puski, which I’m pretty sure is funny in any language, and the Russian women in the room adjacent to mine hung their underwear to dry in the shared bathroom. The house on a dead-end street was a confusing mix of granite busts, antique oak beds and battery-powered strings of LED lights. 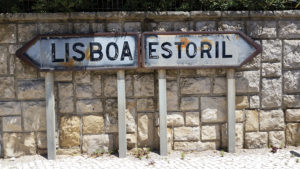 Here’s my jet lag strategy: Don’t sleep on the plane. Instead, watch all the new movies that looked good, but you didn’t want to pay to see in the theater. Every three hours get up to stretch for 10 minutes by the bathrooms in the middle of the aircraft (that’s the most spacious place). Stay up until at least 9 p.m., local time, take a walk or a run and do not drink any coffee or alcohol. The worst jet lag I ever had was after enthusiastically trying all the local beers at the hostel bar in Iceland. I did not recover for a week. You’ve been awake for nearly 30 hours. Take a melatonin, go to sleep and make yourself get up no later than 10 a.m. If you wake up at 5 a.m. feeling fresh as a hen, don’t be fooled and stay in bed.

Next day take it easy — walk around, read a book. Some books are so good they make you want to read the whole thing out loud. Before Page 25, Theroux’s The Happy Isles of Oceania had me laughing and crying and dreaming and remembering.

How I have missed you so

Many times you have met

The thoughts in my head

With your musing and stories

I didn’t want to put it down, but I was so very hungry and wanted to kill the dogs downstairs in retaliation for barking from 7 to 10 in the morning, which to me felt like midnight to 2 a.m. Instead, I set out at the break of mid-afternoon to see parks, ocean and people.

Under a Segafredo sign a few blocks off the beach, I joined the old men (best sign of a good place to eat) to order a cappuccino and the only distinguishable thing on the menu called “hamburguer.” The waiter explained that it contained an egg and fries, which sounded about right. What turned up was a shallow soup bowl with a meat patty swimming in a light brown cream sauce and a runny egg topped with a heap of fries.

Brilliant, this was exactly what I wanted.

Europeans, for a lack of great cuisine, have resorted to making inspired sauces and this one is incredible. In true American fashion I eagerly dug in, eating the fries with my hands. I quickly reminded myself this is when those strict table manners my parents insisted on come in handy. One day you might dine with the queen, they would say when an 8-year-old version of me asked them what was the point of eating clumsily with a knife and fork. My hands seemed perfectly suitable for the job of transporting what was on my plate to mouth — soup being an exception. What if I don’t want to dine with the queen? was my defiant reply.

Allow me this opportunity to praise the elegance of European waiters. They see you sit down but will give you a few minutes to settle in. You may eat in peace. I will never miss being interrupted three times to make sure I am loving my meal and the insistent waste of free drinking water. You need to signal them to pick up your plate by laying your silverware together to the right. If left “open” with the fork handle to the left and knife to the right, you imply you are not yet finished. It is profoundly pleasant and a refreshing change from seeing your dishes plucked away while you’re still chewing — the bill slid under your nose with the most saccharin expression of gratitude as you are considering desert. When you are ready to pay, you flag down the waiter or walk up to the register. Charge: €7,80.

I forgot how windy it is on the Atlantic coast and skirts are not the most practical thing if you’re not a flasher. Tomorrow, I told myself, I’m wearing pants. Trying to retain decency, I stood clumsily on the sidewalk as a car encroached, seemingly wanting to run me over very slowly. I guess this counted as a parking space.

At 5 p.m. I walked to the beach and lay in the sun for a few hours. The water looked, felt and smelled just as I remembered it on the Dutch coast 1,500 miles to the north. A cute, casual restaurant hung from the cliffs and offered relief from the wind. There, I successfully ordered dinner and a caipirinha, one of my favorite drinks. I ambitiously considered getting a second one, and even though it was only a three-minute walk down quiet streets, it would have brought me home pretty well drunk at 9 p.m., so I decided against it.

These are the long lazy days I cherish and chase.