Living around here sometimes presents incredible challenges. Moving snow, hauling wood, dealing with jerks on the highway who think the rules were only made for other people. Look at it this way: At least we don’t have to deal with poisonous frogs.

Poison dart frogs consist of more than 170 species in the amphibian family Dendrobatidae and are native to Central and South America — particularly the Amazon rainforest. True to their name, they can be extremely poisonous, though they don’t fire darts; that portion of their common name comes from a practice employed by the Indigenous hunters of Colombia, who would coat their blow darts in the sticky mucus secreted by the frogs, which is poisonous when absorbed or ingested by another creature. 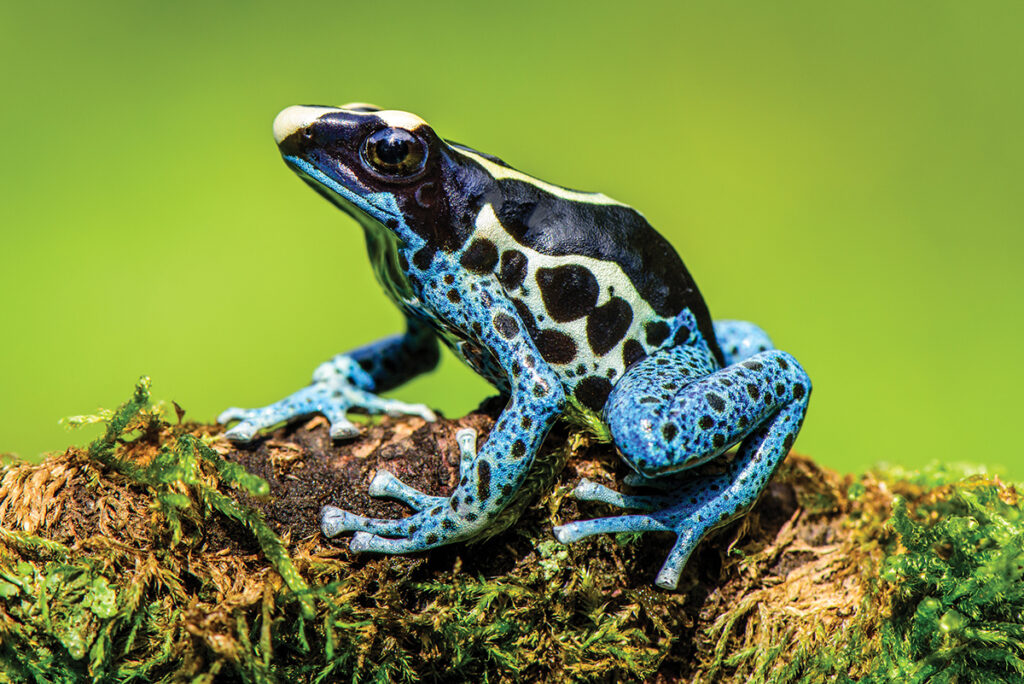 You might be wondering why a tiny frog needs such a powerful toxin covering its body. It’s actually a byproduct of their diet mixed with a little evolutionary process of elimination. Poison dart frogs eat an alkaline-heavy diet composed primarily of ants. The frogs’ bodies separate the nutrients and alkaloids, transferring the toxic materials into mucus glands in their skin.

Why these frogs have developed poisonous goo for their skin fits into the second factor of evolutionary process of elimination. Over countless generations in the wild, certain factors led to certain traits carrying frogs to adulthood more frequently and successfully than others. Spread across millions, perhaps billions, of different frogs, a law of averages began to take over. Weaker traits that result in frogs being spotted by predators and killed before reproduction were naturally filtered out, while strong defense systems allowed more frogs to grow into sexual maturity and reproduce. As is always true of nature, predators develop in tandem, which further complicates nature’s numbers game.

Over a vast period of time, frogs that developed poisonous mucus began to survive and reproduce as they neutralized predatory threats. Bright skin colorations developed alongside their toxic secretions, which served as a warning, effectively doubling down the effectiveness of propagating their genes.

To answer your question, I honestly don’t know why we don’t we don’t leak toxins from our skin, but I can wager a guess. Special defenses are usually suited to special environments. Maintaining an active poisonous agent is possible for poison dart frogs because of their previously mentioned high-alkaline diets. Ants may be an inferior food source for frogs around here, and other traits like increased body mass for surviving cold winters may be preferred by potential mates over the ability to produce toxins inside their bodies.

Though most famous for their poisonous secretions, there are many more unique and exciting facts about poison dart frogs. As is true of many frogs, poison dart frogs begin their lives emerging from eggs as aquatic tadpoles. Unlike frogs you’d find around here, which will often lay eggs and spawn tadpoles in standing water on the ground or in wetlands, poison dart frogs will carry their tadpoles on their backs and deposit them into things like pitcher plants or other flora that can trap small amounts of water high above the forest floor.

It’s common knowledge that poison dart frogs come in a variety of colors. Different colors of frogs are actually different species, and their colors are derived from a mix of genetics and the alkaloids they consume. Different colored frogs also pack different levels of toxin.

Unfortunately, poison dart frogs are considered to be threatened. They are special creatures suited to a very specific habitat that is under constant threat by a number of human sources. Illegal agriculture clears swaths of forest where the frogs live, while also polluting their water supply and ability to breathe with fertilizer run-off. Logging does irreversible damage to the habitat by depriving frogs and other animals of shelter while also permanently altering waterways. Frogs are also harvested for the pet trade, to be bred in captivity and sold around the world.

Poison dart frogs are a popular choice of pet among enthusiasts due to their ease of raising and brilliant colorations. Frogs in captivity lose the ability to produce their signature toxins when they aren’t fed their natural diet, making them safe for humans to handle. This has increased the demand for wild frogs, which further damages their ability to repopulate in the wild.

I’m sure you’ve been slogging through this article to learn more about one thing and one thing only: the frogs’ namesake “poison.” You may also have noticed the intermittent use of the terms “toxin” and “poison” — there is a subtle difference. Poisons are substances that are harmful or even lethal to organisms when ingested, absorbed or inhaled at sufficient quantities. Toxins are substances produced within an organism that, when encountered by other organisms, are poisonous. Poison dart frogs produce toxins that are poisonous, though not equally lethal or even especially dangerous to every creature that encounters them. In fact, only a small number of poison dart frog species produce toxins considered potentially deadly to humans.

All that said, the toxin from the Colombian golden poison frog, called batrachotoxin, is the most potent of all, with an amount as small as two grains of salt being enough to kill an adult human in minutes. As the poison enters the bloodstream, it binds with the sodium channels of your nerves and causes irreversible paralytic damage as your body’s ability to communicate between your nerves and muscles rapidly breaks down. Once in your bloodstream, the toxin is given an express route to your heart, paralyzing it and halting your body’s ability to pump blood to your vital organs, ultimately leading to death by cardiac arrest.

This might be fairly shocking, albeit less grotesque, than the coagulating venom of the American Rattlesnake, but the true terror of the golden poison frog is that this poison can remain viable on surfaces for more than a year.

There are many things in the jungle that can kill you, and not all of them have teeth and claws.