I love to give you some laughs every week, but I have to make a disclaimer: This is a topic I don’t feel comfortable making jokes about, so if you’re just here for the laughs, I’ll catch you next week. 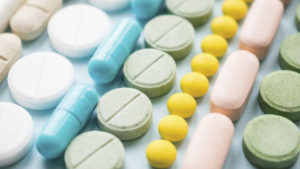 Opioids come in many forms with many different brand names and strengths, such as Oxycontin, Percocet and Vicodin, prescribed by doctors to manage varying degrees of pain after debilitating accidents, surgeries or other sources of serious bodily harm. They’re derived from the opium poppy plant, the same infamous flora that led to opium and heroin epidemics around the world for thousands of years.

Opioids function by attaching to proteins throughout the body called opioid receptors. When taken orally, as with most medication, the medication binds through the gut before traveling to the spinal cord to block pain and deliver a dizzying, mellow high. When taken intravenously (injected directly into the bloodstream), the drug is given a straight shot to the brain, where it is converted into morphine to nuke pain receptors and cause a host of nasty side effects ranging from extreme drowsiness, dizziness and imparied mental status to itching, tingling or heaviness of the limbs.

Taking more than the body can handle causes overdose, which can lead to death by heart or respiratory failure.

The most destructive part of opioids, whether ingested or injected is the extreme addiction factor. The danger of addiction is compounded by the ease with which they are obtained. Though legal medications are intended to be safeguarded by a doctor’s prescription and available only through licensed pharmacies, a staggering amount of opioids have entered American life through patient neglect, drug-seeking behavior of patients or other illegal means. Humans have abused the opium poppy as far back as 3400 BCE, whether by smoking it or injecting its residue, so refined opioids are not the only problem in America’s opioid epidemic.

Given the history behind the opium poppy, the addictive nature of opioids was no secret to drug manufacturers. While the doctors were — and are — aware of these drugs’ addictive nature, they use a benefit/risk system to analyze if patients need a form of opioid pain control. Though we don’t like to admit it, sometimes this form of pain control is necessary, but it’s intended to be a very temporary solution to a temporary problem.

Many people become addicted to prescribed pills to deal with chronic pain, such as a long-term back injury, amputation or muscle death, as was popularized by NBC’s hit television show, House M.D. Research has shown that not only are opioid narcotics addictive by their own right, but can rewire the pain centers of the brain, tricking the brain into thinking the body is in pain and requires more medication to deal with it, which then fuels the cyclical nature of the addiction.

This unique effect is called opioid-induced hyperalgesia, and it’s a serious problem. Breaking a narcotic addiction is the most difficult thing some people will ever endure in their lives, and doing so while feeling incomprehensible pain magnifies that difficulty.

Breaking opioid addiction, though extremely difficult, is not impossible. Detoxing from opioids, or cutting oneself off from them long enough for the body to adjust itself to normalcy, brings on a laundry list of bad effects that can last for hours, days, weeks or even longer, depending on the severity of the addiction. These effects range from severe abdominal pain to chills, diarrhea, and vomiting, as well as intense cravings for the narcotic(s) in question.

The prevalence of opioid addiction in America isn’t just a news headline. One in three Americans surveyed reported they knew someone suffering from some stage of opiate addiction. That could be as many as 100 million people directly affected by these drugs, many of whom may be unaware that there is even a problem.

If you’re looking for some more information about opioids, or are just interested in dispelling some of the myths surrounding them, the Sandpoint library will be hosting a Science Cafe on the subject on Wednesday, Dec. 18 at 5:30 p.m. in the meeting rooms. Have some questions? Shoot Mike Bauer, Lifelong Learning Center coordinator for the library, a call at 208-265-2665.

If you’re dealing with an urgent addiction situation, or if opioids have affected your life or the life of a loved one, don’t be afraid to reach out to the Sandpoint Community Resource Center. Their website — sandpointcommunityresource.com — has a great self-help section, otherwise call them at 208-920-1840. They’re always happy to help anyone out, no matter their situation.

Stay curious and stay healthy, 7B.