Argue with me if you want, but Sandpoint’s a drinking town. Ever wondered how your craft brew goes from being a plant to being an awesome adult beverage? You’re about to find out.

Fermentation is the process of microorganisms pulling energy from carbohydrates, or sugars, and producing carbon dioxide (CO2) as waste. In a way, it’s the reverse action plants make when pulling CO2 from the air and using photosynthesis to split the carbon and oxygen, then using the carbon to create carbohydrates that either foster floral reproduction or feed animals with the intent of propagating the plant’s genetic lineage, as with some berry plants.

Fermentation takes place at a microbial level. In the case of fermentation for the purpose of alcohol consumption, humans use a specific strain of yeast to facilitate the fermentation process. 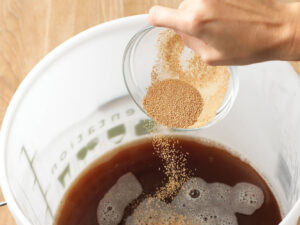 Yeast is a microscopic fungi that confusingly behaves a lot like bacteria, but is vital in the process of making many human foodstuffs — from beer to bread to cheese. Bread is light and fluffy because the yeast farts CO2 into the dough, creating pockets of CO2 that causes the dough to foam up and expand before it is hardened by the oven’s heat and the yeast is killed off.

A similar process happens when humans ferment hops and grapes into beer and wine, respectively. However, unlike the yeast used in bread, brewer’s yeast creates ethanol as a byproduct of carbohydrate consumption.

Generally, the more carbs you have loaded into whatever it is you’re trying to ferment, the higher the alcohol content will be once the yeast has finished the process. During this process, you will notice the liquid you are fermenting will begin to bubble and froth. This is the CO2 being released as waste, which is lighter than the surrounding liquid and is rising to the surface. When left under pressure, this CO2 can become extremely dangerous.

If left in a sealed container with very little space, such as a bottle or a mason jar, the built up CO2 can potentially blow the lid off the object as the carbon dioxide is building up, but there’s not enough volume to contain it. A simple air lock device can solve this problem. While you might be thinking about the airlock chambers from your favorite science fiction franchise, an airlock for homebrewing is much simpler. It is essentially a small S-trap, just like the one used by your sink.

An S trap works by trapping just enough drain water beneath your sink so that the air from the sewer or your septic tank doesn’t rise up and stink out your entire house. A brewer’s air lock works similarly, having two compartments filled with water. CO2 from the beverage that is fermenting naturally rises, and is lighter than the water of the lock, so it passes through and is released into the air, while airborne bacteria, oxygen or other gasses won’t be able to pass into your brew.

While most sugars used in fermentation originate from plants, there are some that come from animals, though they are markedly fewer in number. Mead is the byproduct of feeding yeast the sugars from honey, produced by bees. We’ve talked before about how incredible and disgusting honey really is: bees suck up pollen grains from flowers and then regurgitate honey. It’s basically delicious golden bug vomit.

Cheese is made by fermenting the lactose sugars present in milk. Fermenting the milk creates lactic acid, which then goes on to split the milk into two major components: curds and whey. Curds are globs of curdled milk and proteins, while the whey is primarily water.

Cheese goes through a few extra steps after fermentation, where the whey is drained from the curds, the curds are pressed and salted and then introduced to new strains of fungi that will go on to add flavor to the cheese. The marbled blue substances that give bleu cheese both its name and distinct flavor are actually Penicillium colonies — the same type of fungi used to create the antibiotic, penicillin.

So let’s talk about the best part of fermentation: alcohol. Alcohol makes you drunk because of the ethanol content. The higher the ethanol content, the more potent the drink. Your body’s ability to resist the effects of ethanol intoxication rely on numerous factors from your age, height, weight and probably a host of genetic things that I can’t even imagine. The way it inebriates you is by filtering into your bloodstream. The ethanol molecules are small enough to pass between individual cells and, once they reach the brain, they begin causing some weird reactions from just generally being in the way.

Imagine for a moment that you’ve created an incredible laser maze with magnets, mirrors and a laser. With the flick of a switch, you can change the shape of the laser maze to create images of anything you can imagine. Suddenly your roommate, Dale, fires a T-shirt cannon filled with reflective confetti into the middle of your laser maze. For a few hours until you can clean it all up, your laser maze is a disastrous mess and all it wants to do is call its ex-girlfriend at four in the morning.

This is what happens to your brain when you drink alcohol.

If homebrewing interests you, I would suggest waiting until the library opens back up again. Aside from having many books dedicated to the subject, the library also gives you access to LexisNexis, a legal network that can help inform you about the legal status of homebrewing in your area.

Stay patient, and stay curious, 7B.