Most of the time, bacteria are impossible to spot with the naked eye. While you may be able to visually identify an infection in a cut on your finger, you’re actually observing the effects of your body reacting to the bacteria’s presence, not the bacteria itself.

Cyanobacteria are very unique in that respect. Some colonies grow large enough for you to handle, some reaching the size of a grape. This may not sound like a big deal, but seeing bacterial colonies grow to this size is a pretty impressive feat.

Even more impressive is the fact that we all owe our ability to survive to these freaky little microbes. More on that later.

What are cyanobacteria, you might be wondering? They are a type of bacteria that utilizes photosynthesis to produce energy, just like the cells of a plant. Unique to certain types of cyanobacteria is their ability to turn dinitrogen, or two linked nitrogen atoms, into two individual nitrogen atoms. Nitrogen is important to plants because of the role it plays in producing chlorophyll, the green pigment present in plant leaves that forms the basis for a plant’s ability to capture and utilize sunlight. 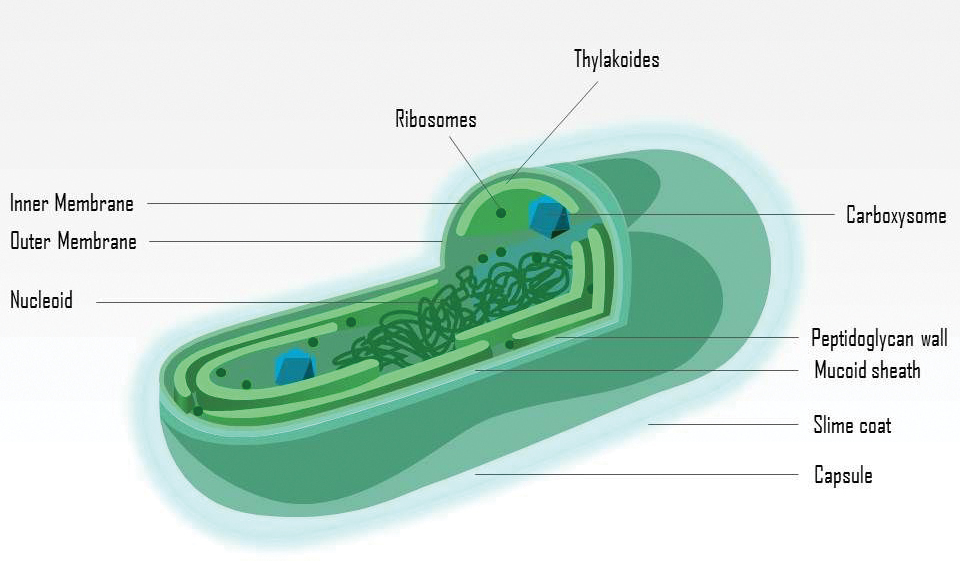 Cyanobacteria have a long and dramatic history on Earth, and like the hobbits of the Fellowship of the Ring, they once proved that even the smallest things can have the biggest impact in the world. Around 2.4 billion years ago, something called the Great Oxidation Event occurred. This was one of the first major extinction events on the planet, when oxygen levels sharply rose and wiped out most life on Earth.

The Great Oxidation Event triggered a number of unique happenings in early Earth history. The increase in oxygen bonded with iron atoms in the oceans and made them sink, creating huge bands of sedimentary iron that would later be pushed closer to the surface by geological phenomena like the movement of plate tectonics and volcanism. The excess oxygen also bonded with methane in the atmosphere, helping reduce the greenhouse effect planet-wide and causing a chain reaction of global cooling that led to a number of ice ages. Finally, the increase in oxygen poisoned just about every other form of unicellular life on Earth — this sounds terrible, but it paved the way for the evolution of plants, and eventually other multicellular life, humanity included.

So how is cyanobacteria relevant to you? There are a number of cool modern features of these ancient cells.

Cyanobacteria’s ability to make usable nitrogen for plants is hugely beneficial for agriculture — from the large-scale farmer to the home gardener. Some of the most exciting applications for cyanobacteria come from their ability to produce renewable energy. Paired with some other chemicals to promote electrical pathways and conductivity, colonies of cyanobacteria can be linked to electrodes that capture some of the energy produced during photosynthesis.

The environmental impact of this sort of algal farming is considerably lower than traditional methods like burning coal, where we are effectively aerosolizing carbon, which we then struggle to pull back out of the atmosphere.

When perfected, this could potentially be an even more cost-effective method of renewable energy production than traditional solar voltaic panels, as cyanobacteria are organic and will actively replace dead cells, whereas traditional solar panels require costly repair and replacement over time.

Cyanobacteria can also be used alongside fossil fuels to produce ethanol, which is used in many forms of fuel, from unleaded gasoline to jet fuel. Some strains of cyanobacteria produce ethanol as a byproduct of photosynthesis, which will evaporate when exposed to sunlight throughout the day. If contained, the ethanol will condense along the edges of the container as the air cools later in the day, and then roll down into ethanol collectors.

We currently use corn to produce ethanol, which requires at least 26 pounds of corn per gallon of ethanol — not counting the amount of fuel used to harvest, shuck and mill corn, then distill it into ethanol.

I think I’d just let the unicellular bodies do all of the heavy lifting while I enjoy some popcorn, but that’s just my humble opinion.

You may even be eating cyanobacteria in your diet right now. Blue spirulina is a common sight in health food stores, and it’s hard to miss. True to its name, blue spirulina gives an otherworldly blue hue to any liquid to which it is bound. It has a sharp, sea-like flavor and is a good source of potassium and protein with less sugar than a banana. I can tell you from personal experience it makes for a very tasty and unique addition to kombucha, if fermented tea is your thing.

If you’re curious about cyanobacteria and the algae that may power our future, here’s some good news: the library is open again and full of books that have been waiting to be read. There are still a number of restrictions due to the Centers for Disease Control and Prevention guidelines to prevent the spread of COVID-19, some of which are altered hours.

The library is currently open Mondays, Wednesdays, Fridays and Saturdays, with special hours available for seniors, pregnant mothers-to-be and others that are vulnerable to the virus. Check out their website for detailed hours.