This week’s subject is courtesy of Bonners Ferry Bob. Thanks, Bob! 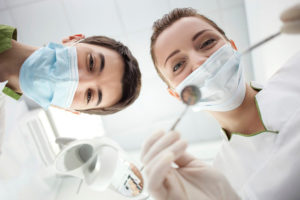 The dentist: It’s the place no one wants to go, but everyone has to. Our mouths are fleshy, skinless portals of bacteria where food is torn to pieces to be feasted upon by an ocean of microorganisms. It makes sense that this part of the body would have a specialized doctor, but what you may not know is that dentistry is one of our oldest forms of medicine, dating back to at least 7000 BC. We’ve found human remains with evidence of drilled teeth, likely to relieve swelling or to drain fluids. Gross!

When you’re sitting in the chair, you don’t really have a good view of what’s going on. All you hear are drills and other gizmos while you’re hopefully numbed up. We’re here to find out just what the doctor is doing in your taco-delivery hole!

The drill is a staple of dentistry. They come in a lot of varieties now, but they’re mostly mechanical and capable of making quick work of any challenge. We’ve found archaeological evidence that around 3300 BC, people used bow drills to drill into teeth. Yeah, the stick-and-string to make fire. Luckily for us, drills have advanced considerably since then. High-speed dental drills function by blasting compressed air through the handpiece and into the head of the device, which houses a tiny windmill that rotates the bit up to nearly 200,000 times per minute. This creates an intense amount of heat from friction and requires water cooling to operate, one of the reasons they also add suction to drain the water that’s cooling the drill, the site, and also washing away debris.

Dentists also have lasers for use at their disposal. A laser is a beam of light focused into a single point, and it can get very hot. This has the added benefit of cauterizing tissue and helping stop infection from taking root.

One of the more dreaded tools in a dentist’s arsenal is the dental explorer, which you may know as the “sharp little sickle”. This tool is designed to comb along your teeth and catch on any cavities the dentist can’t see. A similar tool, with a blunted tip, is called a periodontal probe and is used to measure the health of the tissues surrounding the tooth (periodontium.)

To counteract most pain during dental treatment, dentists will apply anesthesia. This comes in a lot of different forms. The most commonly used is a local anesthetic that is injected into your cheek or jaw. This anesthetic temporarily binds to the cells of your nerves in the area, blocking their function and ability to identify pain or anything else. This differs from a narcotic, which may be taken by the patient if the pain is excruciating after the procedure. Narcotics, primarily opioid narcotics, bind to opioid receptors in the nervous system at multiple levels. This is one of the reasons they’re so addictive, especially when used by people that have no business using them. It goes straight for your brain and spinal cord. Sometimes, a dentist may use a sedative — think laughing gas (nitrous oxide) or an injection. This is fairly rare, unless you’re undergoing an intense procedure.

Every couple of years, you need to have X-rays taken of your teeth. This is the same process used by doctors to peek inside of your body and see your bones. A specially designed camera fires a concentrated beam of electrons at your face, while a piece of film on the other side captures a silhouette of your teeth. This happens because your flesh isn’t dense enough to absorb the electrons and they pass on through to the film, while your teeth and bones absorb the electrons, leaving a void on the film.

Have you ever gotten a filling? If you’re like me, you’re wondering what they’re doing in your mouth, and probably went on a numb-faced Google rampage in the car afterward. It starts with a cavity. Your dentist will first clean the tooth, then drill and trim an area around the cavity and clear away any decay. Next, they’ll use a mild acid to etch the tooth where the filling is going to be placed. This helps form a secure bond so you’ll be less likely to lose the filling later.  Your dentist will apply a bonding agent (similar to glue) and then use that funny blue light on your mouth. This light triggers a chemical catalyst in the bonding agent that will harden (this is called “curing”) and grip to the etching at a microscopic level. They’ll add another layer, then the filling material before polishing it to be flush with the rest of your tooth.

In the 1700s, dentistry was another game altogether. Some of the tools involved with Renaissance dentistry were repurposed torture devices. The dental key was the precursor to today’s forceps, a little crank that would hook onto your tooth, turn to apply force against your jaw then rip it out. Keep in mind, anesthetic and sterilization weren’t a thing at this time, and the only thing to fill both roles and keep your mouth from getting horribly infected was copious amounts of alcohol.

So raise a beer for your dentist! You might need it if you’re allergic to anesthesia.

Got an idea for a Mad About Science? Email [email protected]