It’s February, which can mean one of two things: It’s cold enough to freeze your hand to your car door and make you call in sick to work, or it’s the best time of the year: baby chick season. 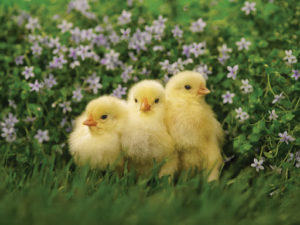 My heart swells as the ruby glow of heat lamps flash on and the sound of cheeping resonates throughout the farms and feed stores of North Idaho. After a rough winter on my birds, they finally get to meet some new friends — in about two months.

If you’re new to the area or thinking of raising your own chickens as pets, food or conversation pieces, you’re in luck. Chickens are fairly easy to raise compared to other animals, but they are still living beings and not to be purchased impulsively. They should be treated with the same respect and gravity you would extend to a dog or a cat — unless you’re one of those people who feeds your dog from your mouth, then it’s time to take a hard look at the role of sanitation in your life.

Baby chicks are some of the most frail creatures on the planet and they require some special care because of this. You need to keep them contained within something called a brooder. A brooder can be anything from a cardboard or wooden box to a specially built container for chicks. Whatever you use, it should not be highly flammable or prone to overheating, as you will need to have a heat lamp pointed straight into it to keep the chicks at a balmy 95 degrees Fahrenheit at all times. In my experience, plastic storage totes work well enough, but containers made from wood are a vastly superior option.

The brooder should also be something that’s easy for you to clean, because large amounts of ammonia gas from their poop will — like virtually everything else — kill baby chicks.

The reason your chicks need such a high level of heat is because they are unable to regulate their own body temperature until they grow their feathers, which occurs a few weeks to a month after they hatch. A room that is comfortably air conditioned for humans will literally freeze a chick to death in less than a few hours, and no one wants that.

Chicks also need food and water. Luckily for us, farm and feed stores sell specially formulated food that comes in medicated and standard varieties, respectively. Medicated chick feed can help prevent a disease called coccidiosis, which results from a parasitic protozoa that can easily kill entire flocks of chickens by reproducing in the digestive tract and passing to new hosts through feces. Most chicks are vaccinated for coccidiosis at the hatchery, but you can always ask at the farm and feed store if you’re unsure.

When providing water for your chicks, it’s best to use special waterers sold at the same place as the chicks. They’re designed so that the chicks can’t easily climb into the water and catch a chill. Having an open water source like a low bowl or a pan is almost certainly a death sentence for most chicks.

Within a week or two, you can set up a low roosting bar for your chicks. They will perch on the roosting bar when they’re ready to sleep, and it will help keep them clean by elevating them above their waste on the ground. Chickens were domesticated from jungle fowl, which naturally roosted in trees to evade predators for millions of years. Roosting is a behavior that’s coded into their DNA.

Another important aspect of raising chicks is socializing with them — that is, if you’re not raising them for meat. Well socialized birds are less likely to be aggressive and will feel more inclined to trot up and meet with you. Friendly birds, especially roosters, make collecting eggs and daily chores a lot easier to complete.

The best way to socialize a bird is while it’s still a chick. Spend a few minutes talking to them or bribe them with treats like chopped up boiled eggs or dehydrated mealworms. If you pour a small pile into their food dish every day for a few days, you can start lowering in a handful of treats and they’ll be pecking out of your hand before you know it.

The most important thing to remember when socializing birds is that they are prey animals, and they think and behave like prey animals — not pets. Quick movements and loud noises will spark a panic reflex and scare them away from future encounters. Because of this, children should be very carefully monitored when handling baby chicks. They are extremely fragile in their infant state, and what we might perceive as a gentle and loving squeeze is like the Death Star’s garbage compactor to a defenseless chick.

After any instance of handling birds, you should wash your hands. Most diseases chickens carry aren’t communicable to humans, but some of the more nasty ones like salmonella are transmissible, and it’s very easy to catch salmonella from an animal that essentially lives among its own droppings.

Flock to the Reader stands next week to learn about raising baby waterfowl. There might even be some puns in there to make you quack up.