Apocalyptic science-fiction scenarios are in the headlines again as a giant chunk of rock is expected to whizz by Earth in September. Some people, including everyone’s favorite electric car manufacturer Elon Musk, have found a prime opportunity to jump on humanity’s fear of death-rocks and grab some spotlight in the shadow of a potential planet killer. 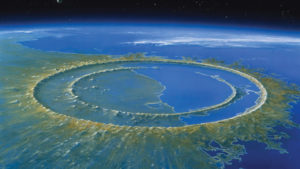 An artist’s rendition of the Chicxulub Crater in Mexico which could have wiped out the dinosaurs. Photo courtesy Wikipedia.

Lucky for us, we have very little to worry about… for now.

The rock causing so much buzz, 2000 QW7, is an asteroid that sports some pretty big dimensions for a hunk of flying stone: just shy of 2,000 feet wide and 2,700 feet long. It’s scary because it’s screaming by Earth at a blistering 14,361 miles per hour and getting as close as 3 million miles from our pale blue dot. In astronomical terms, that’s pretty dang close, but in sky mountain-obliterating-all-life terms, that’s pretty far away. To put it into perspective, that’s more than 13 times the distance between the Earth and the moon.

Asteroids like 2000 QW7 can be a scary prospect, but it’s important to know that asteroids in general aren’t rare. Aside from being “a rock in space,” have you ever wondered what an asteroid is or why it’s there? Asteroids are classified as any piece of rock or metal floating around in space that’s between three feet and 500 miles in diameter. Anything smaller than that is considered a meteoroid, while anything larger would be classified as a dwarf planet.

Asteroids don’t have tails like comets do, and that’s because comets are made up of fine dust particles and ice, while asteroids are primarily minerals and rock. Scientists believe that asteroids are the remnants of planets that didn’t fully form during the solar system’s infancy. Huge chunks of molten rock formed in protoplanetary disks (the loose, hot material that would eventually form the planet itself). These chunks were slung around the infant cores of the planets and smashed into each other like colossal bumper cars, flinging bits and pieces out in all directions, which would later cool down to form the asteroids we know and fear today.

The game of celestial bumper cars didn’t end once the planets formed. Most asteroids now encircle the sun in a huge asteroid belt between Mars and Jupiter. Asteroids in the belt have been observed bumping and smashing into each other, with some getting large enough to attract other space rocks with their own gravity.

If you thought 2000 QW7 was massive, you’d be shocked to know the size of the biggest asteroid we’ve ever observed. 4 Vesta holds the title of king of asteroids with a mean diameter of 326 miles. This titan is so huge that if you were to gently set it down on the surface of Earth, it would cover Idaho, Oregon and Washington. It’s also flying through space at approximately 721 miles per hour. That’s faster than a cruising airliner. 4 Vesta is also the only remaining rocky protoplanet in our solar system, which gives us a unique peek into the conditions of the early solar system.

Another massive asteroid we’ve observed is 2 Pallas. We believe it’s about 312 miles in diameter and contains a bare minimum of 7% of the entire mass of the entire asteroid belt. That’s astounding when you consider the asteroid belt is composed of untold millions of individual space rocks. 2 Pallas also possesses a high orbital eccentricity, meaning it has an unusual elongated orbit similar to that of Pluto. While most planets have an egg-shaped orbit, this asteroid’s orbit looks like a pill from the pharmacy.

Unusual and elongated orbits are a staple for asteroids. They’re in a unique position, wedged between the gravitational pull of the sun and of Jupiter, which can cause some weird things to happen to such small bodies — especially after an impact occurs in the asteroid belt. Asteroids with long elliptical orbits are the ones humans worry about the most, because these orbits have the chance to intersect with the Earth’s orbit.

Kepler’s Second Law of Orbital Motion states that the closer an object is to the sun, the faster it will travel. When an object is ejected from the asteroid belt and travels toward the sun, it speeds up considerably. Unfortunately for us, Earth is also relatively close to the sun, and when an object’s orbit intersects with Earth’s, the object can be traveling as fast as 64,000 mph, as was observed with the Sutter’s Mill asteroid that exploded over California in 2012. It was the fastest asteroid we’ve ever clocked and was about 13 feet in diameter, projected to weigh about 40 tons.

The asteroid that wiped out the dinosaurs and created the 93-mile-wide Chicxulub Crater in Mexico could have been as small as 6.8 miles wide, yet its impact released the energy of more than 21 billion atomic bombs.

That said, planet killers are extremely rare, and our technology for detecting them is improving with every passing day. What’s more, for the first time in human history, we’ve witnessed scientists landing probes on moving asteroids. That’s like scoring a three-point basket at Madison Square Garden, except you’re shooting from Mars.

Does the awesome power of space rocks intrigue you? You can find a boatload of information on asteroids, meteorites and comets at the Sandpoint library, especially in the junior nonfiction (JNF) section. You can find the astronomy books in the 520 section of any library that uses the Dewey Decimal System.