Editor’s note: Brenden Bobby is taking this week off, so Reader Publisher Ben Olson is filling in with a topic suggested by Kim Woodruff.

It’s a quiet Saturday morning. The rest of the family is out for the day. Sounds of the outdoors are muted as you situate yourself on the couch under a blanket to read a book in rare solitude when you hear a distracting noise. 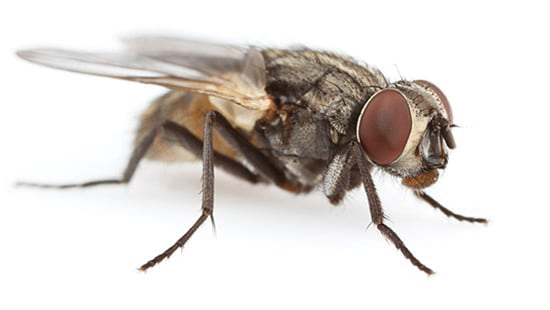 Instead of relaxing with a book, the next 15 minutes are filled with wild swats at windows and lamps with a rolled up newspaper until, panting and sweating, you stand victorious over the squashed remains of a housefly.

We’ve all been there, but what exactly are houseflies? How long do they live? And why are they always annoying us as they buzz around light fixtures and windows? Well, the truth is, we only have ourselves to blame.

The common housefly has been around for more than 60 million years, possibly originating in the Middle East, but has since spread to every corner of the globe. Because they are attracted to food matter created by humans, houseflies and various species of fly are one of the most ubiquitous bugs on the planet — so prevalent that forensic investigators can even determine the approximate time of death in a human based on the development of fly larvae found on the corpse.

Forensics have shown that certain species of fly are attracted to a corpse at certain stages of decomposition, so by recording which species are present, as well as the age and developmental stage of the maggots, observers can determine an accurate time and date of death. The only time this method isn’t useful is when the corpse is found in a rare place where flies don’t live, such as underwater.

Flies are known to be commensal of humans, which means one species gains benefits while those of the other species neither benefit nor are harmed. But that’s not entirely accurate, since houseflies can spread diseases due to their proclivity for feeding on rotting food matter. But compared to insects like mosquitoes, which spread deadly diseases like malaria and dengue fever, houseflies are relatively harmless. They do come in contact with a range of harmful bacteria such as Salmonella and E.coli, so they can aid the spread of these bacteria by contaminating food and cooking utensils. In other words, don’t smooch one on its proboscis.

Houseflies have large compound eyes that can see virtually 360 degrees and they process visual information about seven times more quickly than humans, which is why they’re so darn hard to swat sometimes. Because of their reaction time, they essentially see human movements in slow motion, utilizing what’s called a higher flicker fusion rate. Their eyes are structured like a honeycomb containing 8,000 lenses, so good luck sneaking up on these little buggers. In a single second, the human brain processes about 60 images, while a fly can process around 250.

Flies live on a liquid diet, using a flexible proboscis with an enlarged fleshy tip to suck up fluids. To ingest solid objects, flies inject saliva into the food to break them down into liquid, and suck the loose particles up the proboscis like water. Flies even have taste organs located on the tips of their legs, so they can identify foods they like — such as sugars — just by walking over them. This is why you often see a fly rubbing its legs together, which is like a fly’s way of cleansing its palate between meals.

Tiny claws at the end of each leg are paired with adhesive pads, which enable flies to walk up smooth walls and ceilings much like some species of lizards. The claws help unstick the leg for the fly to take its next step.

Flies don’t live a particularly long time, with life cycles that last an average of 30 days. But, in that short time, they can lay up to 500 eggs, usually in batches of 75-150 each. Flies often lay their eggs in feces, rotting carcasses and decaying fruit to help preserve the larvae, or maggots, with something to eat when they hatch. Remember, every time you see a fly, it was recently rooting around in something nasty.

Flies enter homes for a number of reasons, but they are drawn to windows simply because they want to escape. They’re often easier to swat when buzzing around a window because their senses are confused when encountering glass. Flies may have 8,000 lenses in their eyes, but they aren’t able to focus them, which is probably why they cannot see well enough to escape simple window glass. Some flies found in windows may not even be the common housefly, but a cluster fly, which looks similar but is larger and makes a more ragged buzzing sound, flying in a sluggish manner. The best time to sneak up on a fly is after dark, as they rest at night, congregating on ceilings, beams and overhead wires when inside, or inside foliage or long grass if outdoors.

For all of their annoying habits, houseflies play an important ecological role in breaking down and recycling organic matter. Housefly larvae are quite nutritious for use as insect-based animal feed for farmed fish and livestock, and make great bait for anglers. In the 1970s, an aircraft modeler named Frank Ehling even constructed a miniature balsa-wood airplane powered completely by tethering live houseflies. Perhaps someday a fly-drawn carriage might arrive to buzz you downtown for a night on the town. Er, probably not.