Set the Tesla to ludicrous speed, because like Sonic the Hedgehog, we’re about to go fast!

Traveling insurmountably huge distances is the ultimate dream of the scientific mind. Imagine the bygone days of the American pioneers, scooping up farmland, homesteading and building communities — except on a planet very far away from the merciless slaughter of indigenous inhabitants and blood feuds with the neighbors. 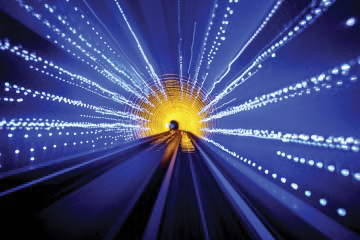 To realistically reach other planets, human beings need a way to travel very fast. The nearest star to us, excluding the sun, is Proxima Centauri, approximately 24,984,092,897,478 miles away — which would take about four and a half years to reach if we were to be traveling at the speed of light.

The real kicker is that we aren’t sure that Proxima Centauri has any planets that would be safe for us to live on.

Luckily for the traveler, this discovery wouldn’t be incredibly problematic if they were traveling at the speed of light. That is because, due to Einstein’s theory of relativity, the faster an object travels, the shorter the duration of time passes for the traveler… Sort of.

This is an extremely complicated subject. If we fully understood it, you’d probably be reading this on your 12G tablet from Neptune, as there would be very little boundaries left for humankind.

The complicated nature of faster-than-light (FTL) travel is just one obstacle to our dominance of space and time. It takes an immense amount of energy to fight gravity and travel quickly. The closer an object comes to reaching the speed of light, the more energy that object requires to accelerate, eventually requiring an infinite amount of energy to travel at the speed of light. An object moving at this speed encountering any form of friction, be it colliding with gasses or other solid objects, would likely tear the object apart and convert the matter into heat energy, similar to what your car brakes do.

The basis of the warp drive from Star Trek is that it creates a “fold” in spacetime, allowing ships to travel at conventional speeds within a pocket. Think of it this way: If you were to place a single sea monkey (a form of brine shrimp often kept as an aquarium pet) at the bottom of a plastic pool, then fill the pool with water, the sea monkey would expend a lot of effort to swim to the surface through the water. However, if you add soap to the water to create bubbles, the sea monkey could catch a ride inside of a bubble and rise to the surface much more quickly and with far less effort than if it were to swim.

This science fiction idea is rooted in science fact. Most scientific vacuums are created by using magnetic fields and lasers, allowing specific atoms such as gold, to travel at incredible speeds through a vacuum tube to impact other atoms, without being slowed by things like oxygen and nitrogen.

Another form of FTL travel popularized by mainstream science fiction is the use of hyperspace, from Star Wars. The premise of hyperspace is that a ship has a device that can push the ship into another dimension to create shortcuts through spacetime. On paper, multiple dimensions are as simple to calculate as adding a number to an equation, yet interacting with one in the real world is obscenely complicated.

Imagine wrapping a globe in silk and driving a Hotwheels car across the surface. You could drive your toy car around the globe, navigating the traditional dimensions, or you could cut a hole in the silk and push it through to the other side of the globe, reaching the destination much faster and with far less energy expended.

The final type of FTL travel in popular media I will highlight comes from the game franchise, Mass Effect. In the games, there are huge structures in space called “mass relays” that look like big calipers. When a ship gets close to the relay, the pilot punches in some numbers and poof! The ship has traveled across a huge amount of space in seconds.

This method is closely related to the warp drive from Star Trek, in that the relays create a field of mass-neutral space, giving the ship a channel to fly through. To an outside observer, the ship would appear to elongate and move very quickly, but to people on the ship, it’s like driving through a short tunnel. I have always found this idea to be fascinating, as I feel it best mimics human travel by creating two anchored ports that remain consistently connected.

It’s basically the pneumatic tube you put your money in at the bank. The tube is a vacuum that quickly transports objects from one side to another by minimizing friction and creating a “rail” from which energy can’t be easily wasted, as opposed to something like an open warp drive or a hyperspace drive that’s punching holes into the universe.