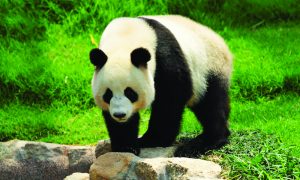 A giant panda goes about its business.

Whelp, we did one on sea pandas. Might as well run an article on land pandas too, right?

Giant pandas are one of the most well-recognized, yet rarest animals in the world. After a recent census, scientists counted about 1,800 pandas in the wild. That sounds bad, but it’s about 800 more than they found in the ‘70s, and it’s not just because the pandas are good at hiding. The human effort to revive the giant panda is probably one of the greatest and most expensive conservation feats the world has ever pulled off.

And how could we not save them? Just look at that face!

Ever wonder how scientists count pandas? You can bet they don’t mail the pandas any census data.

No, their job, according to the World Wildlife Fund (WWF), is much more nasty than sending out mail. Teams of researchers comb the forests, mountains and valleys of southern China looking for poop. Yep, I couldn’t make that up: They look for poop.

It goes deeper than that. When they find poop, they sift through it to find undigested bamboo and reference the bite marks left behind by the panda. Pandas don’t have access to orthodontic care, so scientists are able to differentiate pandas based on the teeth marks they leave behind on the bamboo. That’s some serious dedication.

Pandas, like other bears, are classified as carnivores. This seems pretty odd when its diet is primarily bamboo. The average panda eats a lot of bamboo every day. We’re talking 44 pounds worth, about a fifth of the average panda’s body weight (depending on its sex).

Speaking of weight, you might like to know about a little something called a bite force quotient. This is a cool number you get when you divide an animal’s bite force in newtons by its total weight.

A tiger, one of the most feared predators on the face of the planet, has a BFQ averaging at 127.

A panda, one of the most lovable and goofy animals in the world has a BFQ averaging 292.

That left me… bamboozled.

There’s no way I could fit any more bad puns into this article.

Ever look at a panda claw? Oh man, that would make an awesome name for an Oreo-flavored donut. Make it happen, Sandpoint!

But seriously, it wasn’t until I started writing this article that I looked at a picture of a panda claw. It just looks like a normal bear foot to me, until I looked at the skeleton.

These buggers have six digits!

A Panda’s claw is a unique structure. It has an extra bone one could mistake for a digit that juts out of the side, right where you’d expect a thumb to be. This is an anchor point for tendons to reduce stress while bending, and also act as a catch that allows the panda to grab bamboo. It’s called a radial sesamoid. Other bears have it, too, but it’s much, much smaller.

You wouldn’t expect it just by looking at one, but pandas are amazing climbers. They can climb trees, mountains, rock faces, you name it. Their claws are retractable, and that extra digit helps them grip onto surfaces without injury. They’ve been reported to climb over 12,000 feet of mountains to reach more favorable feeding sites.

If the pizza crust is more than an arm’s length away, I usually let that one go as a casualty of war. Talk about dedication.

Ever wonder how something so cute and lovable could become so endangered?

Logging for lumber and fuel has caused massive swaths of deforested wasteland in China. These are lands that are struggling to recover, and lands the panda once used to graze.

Lands have been cleared for agriculture, because the human population of China and the world at large is exploding.

Infrastructure to get these products from logging and farming sites to shipping hubs, such as highways and railroads, carve through the pandas’ habitat, isolating genetically diverse individuals from one another. Who hasn’t hit a deer around here? It’s the same thing, except with pandas.

Luckily, it’s not too late for them. The panda was blessed with a unique cuteness that has helped fund the massive conservation effort to save it, which has given people the resources to convince China’s government to protect lands specifically for pandas and allow populations to link back together, even as the world industrializes around them.

National parks did wonders for us!

China has officially declared the panda to be a national treasure. For some time, the Chinese government actually made a staggering profit by loaning pandas out to foreign zoos on 10-year contracts, netting $1 mil a year per panda.

The WWF worked hard to make sure that wasn’t just exploitation money, and actually managed to coerce the Chinese government into using more than half that money for conservation efforts. That $500K a year saves a whole lot of trees. Multiply that by however many pandas are out on loan around the world and you have a lot to work with.

Some people may argue that the gratuitous amount of money thrown at pandas is a waste. I believe it is not.

Money spent on advertising the cause alone heightens societal awareness of the need for conservation.

Money spent actually conserving land for the pandas helps more than just the pandas. It helps countless other, less-cute but very important species by ensuring they have a home to continue pollinating plants, fertilizing soil and maintaining a healthy ecosystem which also helps us out. A healthy forest makes for an awesome carbon vacuum, and given how much carbon is in the air now, we need all of the carbon vacuums we can get.

So thanks, pandas. Thanks for being the face of hope for a better, cleaner world.

Now about that donut…