By Brenden Bobby
Reader Columnist
Brought to you by Sandpoint Library

This article is going to contain a couple of firsts. First and foremost, this is the first Mad About Science article dedicated to a single person. Yep, believe it or not, we haven’t had an article about a single person before.

Next, it’ll be a bit more somber than our usual articles. You know and love us because we’re so lighthearted and goofy; don’t worry, I’ll do my best to deliver that, given the circumstances.

So, what are we talking about? 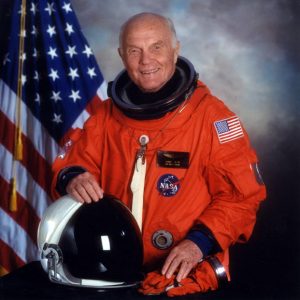 Color formal portrait of John Glenn in his spacesuit as a crew member on the Space Shuttle Discovery mission STS-95, 1998. Courtesy NASA.

John Glenn. You’ve heard his name in the news quite often lately, and for good reason. He was the first American to orbit the Earth aboard Friendship 7 on Feb. 20, 1962—seven years before Apollo 11 would become the first artificial body to touch down on the face of the moon. An important distinction here is that John Glenn was the first American to orbit the Earth, but not the first man in space. That honor goes to Yuri Gagarin, a Russian cosmonaut that went to space and back on April 12, 1961.

Today, orbiting Earth seems like no big deal; we have a space station floating up there orbiting the Earth about 16 times a day. It’s still a big deal, but it was an even bigger deal in 1962. The first time you do anything is a colossal moment. Remember prom? Your first beer? The first time you were in a tin can with a rocket strapped to the back and a computer about as powerful as a solar calculator at your fingertips?

Yeah, it was a big deal.

Consider this: Fewer than 59 years passed between us building the first airplane that traveled 120 feet at less than 7 miles per hour to us hurling a man into space.

It’s possible, and even likely, that you are related to someone who read about both of these events happening in their lifetime.

John Glenn was a lot more than an astronaut, though. He served as a fighter pilot during World War II and flew 59 missions in the South Pacific. Ever feel nervous when the plane takes off and lands on your way to or out of Spokane International? Imagine that 59 times over two years.

Oh yeah, and other planes and guys on the ground are shooting at you for your mid-flight entertainment. Every time.

Apparently that wasn’t enough for him, because he flew during the Korean War, too. He even got to fly one of our first jet fighters: The F9F Panther interceptor. Not once, not twice, but 63 times. He apparently was such a target for enemy flak that he earned a nickname that my bosses would scold me for printing. He once landed with over 250 holes in his aircraft.

You can bet there was no stewardess handing out orange juice and cookies.

He also claims the record for being the first man to complete a supersonic transcontinental flight, from California to New York in three hours and 23 minutes. It takes a 747 between 4.5 and 6 hours to make that same flight.

My level of amazement upon reading that can’t be quantified. Can you imagine flying that fast for that long?

I get tired driving to Spokane!

If my math is right, if you were traveling at his speed (about 768 mph), you’d reach Spokane in about five and a half minutes after departing from our little airport here in Sandpoint.

On the fateful day that John Glenn made history, the entire mission almost became a memorial. He orbited the Earth three times in a flight with a total time lasting over five hours, and when it was time to descend, an indicator lit up notifying him that the heat shield was compromised.

That’s pretty huge. That’s like driving without a windshield. Or a front end of your car. Through a volcanic eruption and a hurricane at the same time. With the engineers’ help, he was able to achieve splashdown without incident, making history as he did so.

He left the planet with the weight of our entire country on his shoulders and succeeded. He claimed it was the best day of his life, and with good reason. It was a major push to get Buzz Aldrin, Neil Armstrong and Michael Collins to the moon with Apollo 11.

He would later go on to become a U.S. Senator for 25 years. That’s almost my entire life! He even took a few runs at a Vice Presidential position, but managed to get eked out every time. Politics is a rough game, especially for people that value their integrity.

He got to return to space one last time and claim yet another record as oldest person to go to space. He was 77 at the time—October 29, 1998—and he was aboard the Space Shuttle Discovery for a nine-day mission as a payload specialist.

You’ve probably heard all of this from the news in the past few days. A lifetime of accolades, the kind that even our most creative authors couldn’t realistically pen. But he achieved them and so much more.

One thing I haven’t read or heard in the news was that he was married for 73 years. Seventy-three years! His marriage was 14 years longer than the span of time between our first aerial flight as a species and the first time he orbited the Earth.

He was a huge advocate for the advancement of science, especially space science and rocketry, and he didn’t just talk about it. He proved it. He proved that we, not just as Americans but as human beings, could push the very limits of what we believed was possible, dust ourselves off and ask, “Well, what’s next?”

John Glenn had the right stuff, all right. He was an inspiration throughout his life, and I hope the press from his death helps inspire a whole new generation of dreamers, thinkers and doers. I just wanted to do my small part and help spread the story of one of the most heroic men to ever walk the Earth.