Toward a more complex ‘Moses’

Writing for CNN, acclaimed University of Texas at Austin historian, and one of the leading American thinkers on race, Peniel Joseph took up the topic of the 2019 drama-biopic Harriet, which depicts a pivotal moment in the life of abolitionist icon Harriet Tubman. 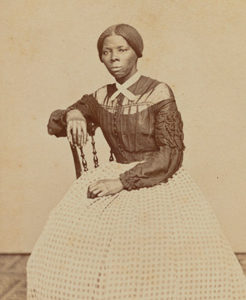 The gist of his piece, titled “The Oscars’ ‘Harriet Tubman problem,’” is that Hollywood has a very hard time honoring depictions of blackness and the black experience in America that don’t conform to tropes steeped in racism — even when supposedly well intentioned. That is so, of course, because the powers that be in Hollywood are very white. The result is a philosophical, spiritual and historical flatness to so many films with black characters — iconic or otherwise — at their center.

With Harriet, starring British actor Cynthia Erivo in the titular role, the challenge from the get-go was to present a character so often mythologized as the quasi-miraculous “Moses” of the Underground Railroad in a way that captures her full complexity as a human being while also hewing to the historical facts.

This was always going to be a difficult proposition — the Harriet Tubman mythos is so deeply ingrained in American cultural memory that, as the Smithsonian recently pointed out, many Americans think she was a character from folklore. No less than Ta-Nehisi Coates, one of the most trenchant public thinkers on race relations writing today, employed Tubman in his 2019 novel The Water Dancer as a literally supernatural figure capable of teleportation.

Against such high hurdles, how could Harriet succeed?

By many measures, it has succeeded. Despite the Oscars’ “problem,” as Joseph put it, Harriet and its star earned a pair of Oscar nominations. It pulled in $43.3 million at the box office and audiences on rottentomatoes.com gave it a 97% rating. Even critical reviewers applaud Erivo’s performance and oblige a nod toward its somber-yet-inspirational tone.

The character of Tubman is so often sanctified — something Harriet director Kasi Lemmons does lean on, depicting Tubman as someone seemingly receiving direct communications from God — that her depiction as a kindly, devout grandmother with nerves of steel has become something of the “problem” referred to by Joseph. However, this version of Tubman returns some of the fire to her legacy.

In Harriet, like its real-life namesake, Eviro’s Tubman packs a pistol and knows how to use it. She leads Northern soldiers — albeit, segregated soldiers and only as a marginalized aside — in battle during the Civil War, liberating many hundreds of slaves in the process. She was a militant guerilla fighter who drew on her experiences with outdoor slave labor to navigate an astonishing 100 miles through hostile Slave Power territory, alone, to find her own freedom — then returned again and again to save members of her own family and many others besides.

Away from the saintly austerity of many other depictions, the real Tubman was vocal about her prayer that the man who claimed to own her would die, and it’s telling that her weapon of choice during combat action with the Union Army was a sharpshooter’s rifle.

What’s more, Tubman was an active, committed fighter for women’s suffrage from 1860 until her death in 1913. Her activism naturally flowed from anti-slavery to women’s rights to human rights as a whole.

Perhaps the greatest success of Harriet, the first and so far only standalone film about her, is that it attempts to draw on the historical militancy of Tubman’s beliefs to provide a more complicated, philosophically charged version of the slave born Araminta Harriet Ross as she did her part to help kick down a system in which she — an enslaved black woman — was triply oppressed.

Is it a perfect historical document? Of course not. Is it part of the “problem” with Hollywood described by Joseph? He would say yes, in so far as that while it’s a more-nuanced-than-typical portrait, Harriet still falls too close to the traditional aspirational tale of a former slave overcoming long odds to find freedom, rather than centering “more daring and confrontational images of black humanity.”

Nonetheless, this Tubman is no children’s book character, and comes closer than any narrative about her to the truth. It would be a problem if audiences ignored it.