Over the past several months, the Sagle community was rocked by a string of burglaries that left homeowners nervous and frustrated. 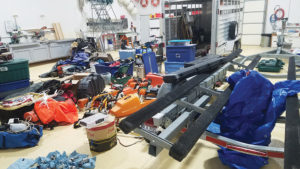 A look at some of the stolen items recovered by the Bonner County Sheriff’s Office. Photo courtesy Cameron Rasmusson.

Those unsettled neighborhoods are ushering in the fall with some welcome progress into that criminal investigation. In August, the Bonner County Sheriff’s Office arrested a suspect connected to the burglaries. And in turn, they recovered mountains of stolen guns, chainsaws, electronics and other loot.

Amounting to thousands of dollars in value, the goods are piled up in a warehouse at the Bonner County Sheriff’s Office, waiting for rightful owners to claim them.

“The people in [the Sagle community] were tremendously helpful to us in being able to investigate this and getting us to the point where we were able to make an arrest,” said Bonner County Sheriff’s Captain Tim Hemphill. “A lot of the things that enabled us to locate these stolen items and put a case together came from citizens in that neighborhood.”

Chainsaws and firearms are among the most common items recovered by law enforcement. But in total, the spread is a regular smorgasbord of North Idaho lifestyle goods.

Present in the pile are power tools, camping gear, fishing poles and tackle boxes, electronics, power tools, gardening equipment and even a drone.

From the beginning, the burglary investigation presented its share of difficulties. The targeted neighborhoods were low in population density, with long country roads and thick nighttime darkness separating houses. Only a handful of houses had security cameras equipped. What’s more, outside the summer months, many stood empty while “snowbird” owners spent their time at winter residences.

With dozens of houses burglarized over the months, residents gathered July 27 for a tense community meeting with BCSO representatives. Attendees were anxious and suspicious. But they were also ready to organize neighborhood watch programs and assist officers with investigations.

“When we looked into it, those things turned out to be leads for us that were extremely valuable,” said Hemphill. “It’s a really good example of how the entire community benefits by having communication back and forth with us.”

According to Hemphill and Bonner County Sheriff’s Detective Matthew Wallace, residents’ help proved vital in moving the investigation forward. Homeowners shared details that, while seemingly insignificant in isolation, wove together a narrative that pointed officers in the right direction.

The case culminated in the Aug. 4 arrest of Spencer James, who was found at a squatters’ campsite. Information stemming from the arrest resulted in the gradual recovery of stolen items, though investigators say James most likely wasn’t the only alleged thief operating in the area.

“We are working with the defense to recover all the stolen property and close out the other unsolved burglaries,” he said. “Both sides are working to get these issues resolved and will deal with resolving the charges once those issues are addressed.”

As of mid-September, only 30 percent of the recovered items have been reclaimed. The Bonner County Sheriff’s Office asks that affected homeowners check in with them and file a victim’s report with the Bonner County Prosecutor’s Office. That will help authorities get them on track to potentially recover their items.

“This morning I talked to a man who had a burglary and just didn’t bother to report it,” said Wallace. “But his neighbor did, and his neighbor got the majority of their lost items back. So that inspired him to say, ‘Well, this is what I lost.’”

There are also useful measures citizens can take to protect themselves in the event they are burglarized. An extremely useful tool for investigators is a record compiled by homeowners with serial numbers of their most valuable possessions. It’s the easiest way to match valuables with the appropriate owner.

Discouraging would-be burglars from acting in the first place is another key preventative measure. Lately, Sagle homeowners have been taking those steps. That means forming neighborhood watch programs, installing security or game cameras, ensuring properties are well-lit, maintaining strong connections with neighbors and reporting any suspicious activity. Seasonal residents should take special care to ensure their homes are watched while they are away.

“A lot of people who have lived in this community for a long time, we’re used to keeping our doors unlocked and our cars unlocked with the keys in them. And sadly, we’re not that community any more,” said Hemphill. “So we need to change our ways and do what it takes to secure our valuables.”