For Sarah Hines, “Peace Among Black Hills” shows the power of dreaming big.

Inspired by the life of her grandmother, the locally produced film tells a tale of perseverance, courage and vision. But those qualities could well describe the movie project itself. Set to debut this weekend at the Panida Theater, the short film is a testament to community cooperation and support. Hines hopes those qualities will endure into the project’s next phase, ultimately expanding it into a feature-length film.

“I would love for people to come and see it, mostly because the community really helped us put this together,” Hines said.

“Peace Among Black Hills” tells the story of One Star and Jacob, two half-Lakota natives who are separated when One Star is taken to the Carlisle Indian Institute in Pennsylvania. When she escapes but cannot find Jacob, One Star takes control of her destiny—along with several other misfit girls—to set up their own cattle ranch in the west. The adventures that follow paint a heady portrait of romance, resilience and self-discovery. 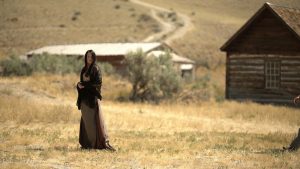 Sarah Hines on the set of “Peace Among Black Hills” in Bannock, Mont. Courtesy photo.

The movie is a passion project for Hines, the film director, star and co-writer along with her sister, Hailey Hines. The family team took great pains to ensure historical accuracy and effectively portray the details of the time period. That commitment eventually brought the crew to Montana, where they shot a portion of the film in the ghost town, Bannack. The decision brought its share of challenges, from the need to secure a filming permit from the state authorities to the grueling work schedule.

“We were getting up at 5 a.m. and not going to bed until 1 a.m.,” Hines said. “We were living off really dark coffee and Subway sandwiches for a few days.”

Casting proved another hurdle for the production. As the process occurred in two phases, with the principal cast members later being supplemented by supporting actors, Hines was committed to establishing chemistry between the varying personalities. That meant spending time together both at work and at play, enjoying barbecues or rounds of “Cards Against Humanity.”

“We ended up with local cast members really passionate about acting,” Hines said. “Everything was on a volunteer basis, and the cast did more than just act. Everyone helped out on set, they shared their stories, they shared their knowledge—it was amazing.”

Another invaluable ally was the Sandpoint Filmmakers Network. Hines encountered the organization of local film lovers at one of their regular meetings, and the group soon adopted the project, putting out casting calls and offering their technical knowledge. Their efforts helped shape the production as a capable and well-organized effort from beginning to end.

The film that will debut at the Panida is a short version of what Hines envisions as a feature-length project. Her hope is that many who attend the screening will become interested in supporting the movie’s expansion into a longer, richer and more detailed film. Community members have already been essential in supporting the project through everything from contributing horses to offering property for shooting locations. Hines believes that same spirit can lift “Peace Among Black Hills” to its full potential.

“We want the community to see what local filmmakers can accomplish,” Hines said.

See the premiere of  “Peace Among Black Hills” on Sunday, Oct. 23, at the Panida Theater. The movie begins at 6 p.m. with doors opening 30 minutes prior. In addition to the screening, the filmmakers will host a question-and-answer session with the audience. Tickets are $8.50 for adults and $4.50 for children, with a portion of the proceeds supporting the Panida Theater.