Shakespeare in the Park debuts in Sandpoint

In its 43rd season, Montana Shakespeare in the Parks (MSIP) now features Sandpoint on its impressive list of performance stops. 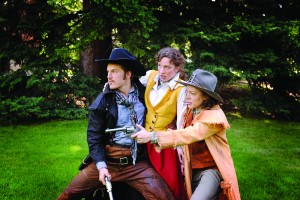 For the past 20 years, the closest we could get to the performance was the Heron Ball Field, which drew a healthy number of their crowd from Sandpoint. This year, we don’t have so far to drive.

Friday, Aug. 21 at 6 p.m. MSIP will present “The Taming of the Shrew” at the Bonner County Fairgrounds. The show, as always, will be free and open to all.

One aspect of MSIP’s take on Shakespeare is the themes they employ while presenting a play. Taking the historical works of Shakespeare and acting them out within a contemporary setting always engages the audience in multiple ways, as well as showing clear evidence as to the timelessness of Shakespeare’s works.

This year, “The Taming of the Shrew” will have a regional Wild West take on the play.

Shakespeare lovers have had a tough go of it the past two seasons, after the Heron event was cancelled after organizer Debbie Lyman retired. Thanks to Christine Holbert at Lost Horse Press, we now doth have more of the eternal bard.

“I used to go to the show in Heron, and when it stopped two years ago, I was disappointed,” said Hobert. “I hoped that someone either in Heron or in Sandpoint would take it over. That didn’t happen for two years, so I then decided that … since [Lost Horse Press is] a nonprofit and does poetry, it would make sense for me to take it on.”

Holbert is no stranger to hosting events. Under the banner of Lost Horse Press, she has organized countless literary events over the years. She was also founder of Spokane’s Get Lit festival.

“It was a good fit,” she said. “I got so much help. Kim Woodruff from Sandpoint Parks and Rec jumped right in. Same thing when I announced it was returning at our Contra Dance. A whole bunch of people jumped in to help.”

The event at the Bonner County Fairgrounds will give theater-goers a new twist on their Shakespeare experience with a medieval village set up at the fairgrounds.

“I met up with the Society for Creative Anachronism,” said Holbert. “And without them, I don’t know what I would’ve done. Weezil Sampter and Lorna Martin put together an entire medieval village with tribal belly dancers and live music from a half-dozen bands.The Shakespeare Club at Sandpoint High School will be doing two-minute vignettes while people are having their dinners. There will be a couple who are fencing masters coming, hand-dyed yarn and spinning wheel demonstrations.”

The gates will open at 1 p.m. to highlight all the pre-show activities. Audience members are encouraged to arrive wearing either medieval or western wear. As always, the performance is completely free, and open to all ages.

“It’s going to be wonderful,” said Holbert. “The whole side of the fairgrounds will be filled with vendors, jugglers, musicians, food vendors. And all the trash will be recycled by Sandpoint’s ‘Green Team.’”

Audience members are encouraged to arrive early with chairs, blankets and picnics, unless you’d like to purchase your food and drink from vendors. Alcohol is allowed, but please drink responsibly.

In over four decades of bringing Shakespeare to rural areas in the west, MSIP is currently embarking upon their largest tour in history. With over 60 stops this season, the troupe will certainly be busy all summer long. This year, almost half of the communities reached by the troupe have populations of 2,000 or fewer.

“We are excited to extend our reach to Spokane and Sandpoint as we maintain the tradition of bringing free Shakespeare to audiences across Montana and its surrounding states,” said Kevin Asselin, artistic director of Montana Shakespeare in the Parks. “We are thankful to all of our tour coordinators who help us share the gift of Shakespeare with their communities.”

“The new director Kevin Asselin was one of the actors for many years, and now he’s directing,” said Holbert.  “I think that makes a difference, giving him added experience.”

MSIP is an outreach program of Montana State University’s College of Arts and Architecture. Grants, corporate sponsorships and hundreds of individual donors support the free performances. The company is also supported by the National Endowment for the Arts, along with other major sponsors.

Each community host is also responsible for raising the funds necessary to bring the troupe to each community. Lost Horse Press would like to thank those individuals and local businesses that have contributed to bring the play to our community.

Catch “The Taming of the Shrew” Saturday, August 21 at 6 p.m. at the Bonner County Fairgrounds. The show is free!