A broad slate of candidates in contested races for Sandpoint and Dover city councils, Dover mayor and Lake Pend Oreille School District Zone 2 trustee gathered Oct. 19 both virtually and in person to answer questions from voters at the Sandpoint library. Sandpoint Mayor Shelby Rognstad presented and answered questions on the 1% local option sales tax, which will also appear on the Tuesday, Nov. 2 ballot.

The forum, hosted by the Sandpoint Reader, Keokee, KRFY 88.5 FM and the Selkirk Association of Realtors, with technical support from library staff, was live streamed by KRFY and a recording is available here: bit.ly/ReaderForum 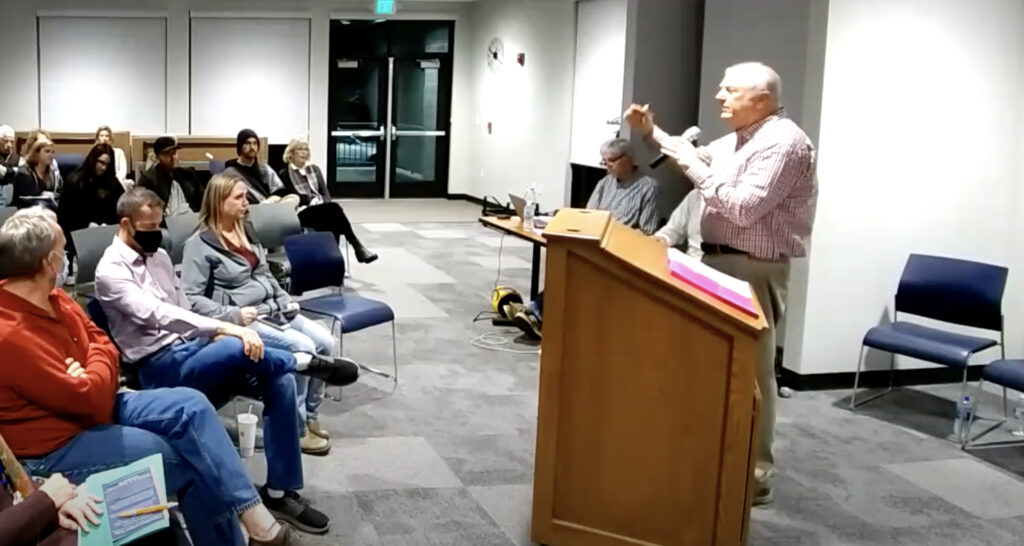 Moderated by Reader Publisher Ben Olson, questions were submitted by voters covering a wide swathe of local issues — from infrastructure to housing, school funding and COVID-19 protocols to “critical race theory,” the relative importance of taxing authority to fund parks and sidewalks, and the direction of future growth. About 70 residents viewed the forum online via Zoom and 50 or so attended in person.

Candidates in the Dover contests focused on a few key themes, including sustainable growth in the community, which has experienced a dramatic population boom over the past 10 years, spurred by the Dover Bay development. Along with that, candidates agreed, have come challenges to adequate infrastructure — from roads and trail connectivity to water and public safety services — along with community fragmentation between so-called “Old Dover” or “historic Dover” and the high-end residential/resort development.

Among those growing pains are long-needed upgrades to the city’s water and sewer treatment systems, conflicts over which have spurred contention between the city of Dover and the development — rising even to legal action between the entities.

George Eskridge, who is also running for mayor, said there is “dissension in the community,” stemming from disagreements over water and infrastructure. “We need to resolve those [issues],” he said. “I think we’re on the way to doing that.”

Council candidate Kim Bledsoe said, “We’ve got to really make sure that we’re doing things that involve the most people and offering different ways for people to get involved.”

Council candidate Amy Lizotte said that she, too, would like to “really bridge both sides and come together and be able to know what’s happening in Dover Bay, with their meetings.”

Candidate Merlin Glass agreed that “when you lawyer up it just dirties the water for everybody,” emphasizing that preparing for the 2029 sunset of the Dover Urban Renewal Agency — which he serves as a board member — is critical to accomplishing the infrastructure projects that have prompted much of the inter-community strife.

Candidate Mark Sauter said, “Right now, I don’t believe that looking at the city budget or the DURA budget, that money is really a problem — it’s more  a matter of getting to work and getting our projects done.”

Sandpoint Mayor Shelby Rognstad presented the proposed 1% LOT, framing it as the means to accomplishing “the city’s most extensive master planning effort related to our parks and rec. Infrastructure that we’ve ever had.”

According to Rognstad, if approved the LOT would run for seven years, raising an estimated $13 million — though previous statements from city officials have also put that number at $12 million. Of those funds, $200,000 per year would be set aside for sidewalk improvements at a variety of locations identified as critical pieces in the city’s pedestrian network. Rognstad said that’s five to seven times what’s currently in the budget for sidewalks.

Geared primarily toward helping pay for development at parks locations including City Beach, the Downtown Waterfront and Travers/Centennial/Great Northern Sports Complex, the LOT would also help fund the purchase of additional open space. Rognstad said 15 cents of every dollar would come from locals while 85 cents would come from out-of-towners.

Finally, the mayor addressed another common question: Why would the LOT benefit primarily parks, open spaces and sidewalks, rather than other needs such as incentivizing affordable housing?

“[Those items have] been a priority of citizens for a long time,” he said. As for sidewalks, “We’ve been advocating on sidewalks for years and haven’t had a funding mechanism. Now we have one.”

Housing affordability was front and center for Sandpoint City Council candidates. Luke Omodt called the issue “a crisis in our time,” adding that, “housing is not a right, but it is a necessity.” He said he supported the idea of a council-established local housing authority to craft local solutions that would increase accessibility for both renters and buyers — otherwise, “people will vote with their feet and our workforce will continue to shrink.”

Candidate Jason Welker agreed that there are already tools available to the council to help ease the prohibitive costs of housing, many of them included in the city’s housing needs assessment conducted in 2019. Meanwhile, “the problem is supply,” he said.

Arthur Bistline said that affordable housing is “a loaded term. I’m all for it unless you start messing with the market.” Furthermore, he questioned why the problem has to be solved within city limits. “I can’t have an apartment in downtown San Francisco because I can’t afford it,” he said.

Frytz Mor returned again and again to the notion of economic “diversification,” arguing that promoting “hard skills” for residents, including local food production, would free workers from low-wage service jobs. “Affordable housing is a misnomer,” he said, adding that supply will never meet demand. Rather, the wealth gap must be addressed. He opposed incentives, policy changes and any form of taxation, all of which he characterized as “government that is losing control of itself and encroaching on our daily lives” and, along with grants and public-private partnerships, as government welfare and an invitation to “crony capitalism.”

Incumbent Joel Aispuro said that despite much conversation on the topic, “I haven’t heard a solution yet. … We have no idea what to do; I’m not going to pretend to give you an answer.”

Asked how they stood on the 1% LOT, most candidates supported the measure. Justin Dick said he’s “a huge proponent of the 1% local option tax as it’s written now,” adding that it opens recreational opportunities for locals who might not be able to afford to own a boat or buy a ski pass.

Bistline said he was against it, but now for it. Wayne Benner said he supported the tax, as it will support the city’s amenities. Welker supports the tax, noting that it’s a stepping stone to leveraging larger grants. He added, however, that it should be used to support housing affordability, such as purchasing property in the Baldy Mountain area using LOT funds to open the way for development of affordable housing on city-owned land. Mor said that such a tax is “squeezing the very people you’re trying to help.” Omodt told the Reader that while he supports the LOT as a funding mechanism, he doesn’t prefer it at this time, adding the measure was “hastily constructed and doesn’t meet the needs of our city.”

Finally, Aispuro said he supported putting the measure on the ballot, now it’s up to the voters.

Incumbent candidate Gary Suppiger and challenger Jalon Peters first addressed “critical race theory,” with Suppiger saying, “CRT is not in our curriculum at LPOSD; it never has been, it never will be as long as I’m on the board. It’s abhorrent to everything I believe in.” Peters, however, argued that CRT is being brought “through the backdoor” through Social Emotional Learning and other curricular models.

Peters stressed the importance of getting parents more involved, including “actually getting them in the classroom more,” in part to see for themselves what’s being taught. “Trust is earned,” he said.

Suppiger said he’s all for parents participating in the classroom, but pushed back against notions of surveilling educators with cameras: “Those who abuse the privilege could take the film from the camera, edit it, create soundbytes, take things out of context and discredit the teacher,” he said. “This is not a good idea.”

Peters said he didn’t mean cameras, but “oversight” by parents.

Peters’ key point was family involvement in education and searching out wasteful appropriations and expenditures — “free money” from the government, he said, that should be sent back if it isn’t needed, specifically in areas like Kindergarten and the school lunch program, which he argued could be trimmed back to realize savings.

Suppiger said both those programs are rooted in academic support. “If we don’t spend this money it can’t be reallocated. The federal government is very specific about what we spend the monies on.” Furthermore, reduction in funding — such as removal of the permanent levy — would result in the reduction of teacher salaries, cutting of programs and even rural school closures.

“Unfortunately the local property tax is the only tool we have — I don’t like it, but it’s the only one we’ve got,” he said.