Feeding wildlife, while good-intentioned, does nothing but hurt the animals

Mary Franzel considers herself a friend to wild animals. As such, she makes it a goal to keep them wild.

She was in the middle of doing so — attempting to haze two moose from her property during the last week of January by shouting and throwing rocks and sticks in their direction — when she noticed something peculiar. When a piece of kindling or a stone would hit the ground near them, the moose would sniff the objects, inspecting their edibility.

These moose were not afraid of Franzel, and their interest in the thrown items implied that they expected her to feed them.

This suspicion became more likely when Franzel discovered the older of the two moose, the mother, dead against her Clark Fork home.

“Honestly, for a second, I thought that [the] mom had just laid down,” she told the Reader. “She literally was leaning against my house.”

The sudden death came as a shock. Both moose had been “walking totally fine,” Franzel said, and “their coats were beautiful” — not tick-ridden, like many of the moose spotted on Sandpoint city streets. As for any sign of a struggle: “Nothing — it was like she just laid down and died.” 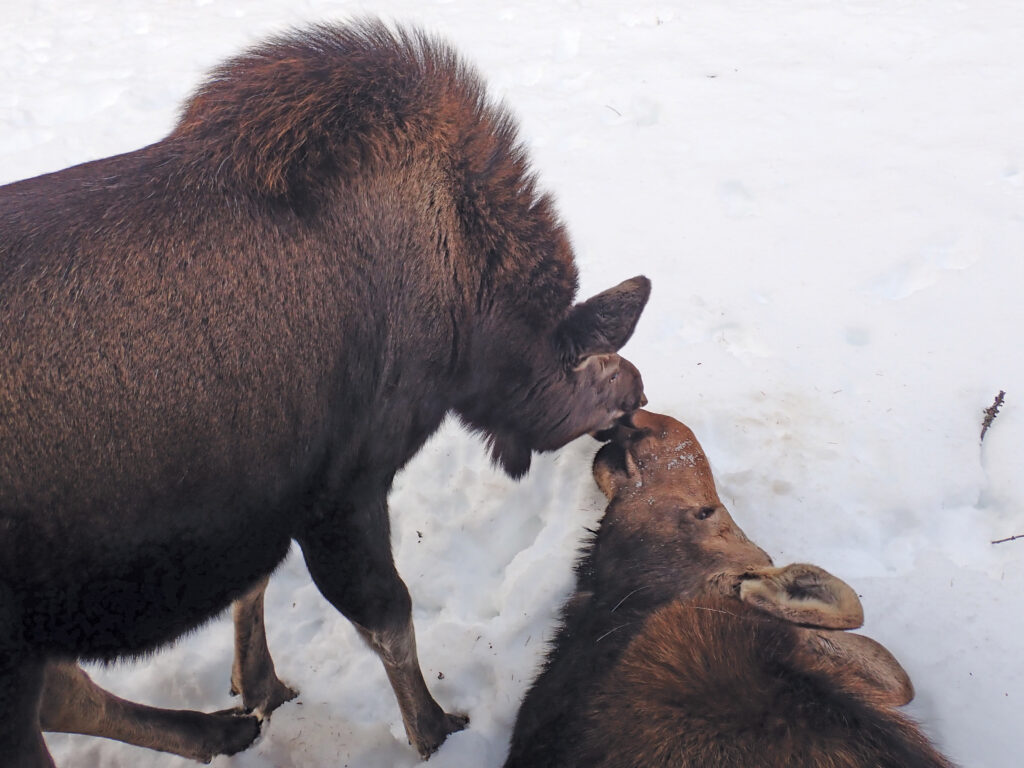 A moose calf inspects its dead mother, who officials suspect died of acidosis — an illness caused by backyard feeding. Photo by Mary Franzel, who took it from the window of her home.

Five days later, Franzel found the second, younger moose dead on her property, fewer than 100 feet from where its mother died.

Franzel sought help from community members who hauled each moose into the mountains to use for trapping bait, and took to social media to share her frustration with the situation. She suspected that the moose died of acidosis, which occurs when a build-up of rich food ferments in the animal’s gut and causes bacteria to leave the rumen, or stomach, and enter the bloodstream.

“You can see major highways [of animal tracks] going right up near a house,” Franzel said, adding that she estimates one-third of the 75 homes in her East Spring Creek neighborhood feed wildlife. “There wouldn’t be a major highway if there wasn’t something good here.”

Idaho Fish and Game personnel familiar with the case confirmed Franzel’s fears. Matt Haag, a conservation officer covering the broader Clark Fork area, said that there are “only two things” this time of year that will kill a perfectly healthy moose within 72 hours: rumen acidosis or ingesting Japanese yew, a landscaping shrub poisonous to ungulates. Franzel said she does not have yew on her property.

T.J. Ross, a spokesperson with IDFG, said that while his office was not able to perform necropsies on either of the deceased moose, conversations with the trapper who disposed of them all but verified the cause of death.

“[He] told us that those moose had been defecating on themselves down the back of their legs quite a bit and it was pretty runny, which is a really strong indicator of acidosis — that it was eating food that it shouldn’t be eating and that’s what killed both of them,” Ross told the Reader. “We don’t know that definitively, but based on the information we collected, that’s what we believe happened.”

During his 17 years as a game warden in Bonner County, Haag has seen a rise in backyard feeding — a practice that, while good-intentioned, hurts wild animals in a variety of ways. Regarding acidosis, Haag said ungulate digestive systems adjust in the winter months to a more fibrous diet.

“It’s just an epidemic here. It’s unbelievable how many people feed,” Haag said. “Honestly, I think they think they’re helping. They think to themselves, ‘How can deer make it through, especially in weather like this where the snow is like concrete?’ But, they’ve been doing it a lot longer than we’ve been here, so they know how to do it.

“They don’t realize that ruminants — deer, elk and moose — eat woody, fibrous material this time of year,” he added. “They’re not after vegetation or green things.”

Not only can diets of corn, vegetables and other rich foods damage the animals’ guts, but the travel patterns that feeding encourages are not natural, Haag said.

“I can tell, driving down the highway, who is feeding and who is not, because there are deer trails in their yard,” Haag said. “They’re bringing these deer across the highway to get hit, and they get hit in the same spots in the wintertime. They shouldn’t be moving as much — especially not running across the highway, unless they’re being fed.

“You see five deer run across the highway together because they know at 10 a.m. that ‘Sally’ is putting corn out,” he added.

In addition, feeding can ramp up the spread of disease. This is especially important to understand as wildlife managers have identified chronic wasting disease in Idaho, and warn that it will inevitably make its way into the panhandle, according to Haag.

“That’s huge,” he said. “When we get our first case of CWD up here, it’s going to go like wildfire because of the amount of people that feed. We’re going to see major deer reduction.”

Feeding wild animals isn’t an issue limited to Bonner County, but something Ross — who is based in Coeur d’Alene — has been observing throughout the region. He said the rise in population, combined with many of those new residents coming from places where wildlife education isn’t emphasized, could be contributing to the issue.

“People forget that they are wild animals and they may appear nice and cute and cuddly, but at the end of the day they are wild and highly unpredictable and therefore dangerous,” he said.

What’s more, an animal that becomes habituated to people can become a danger to itself and to the humans it learns to rely upon. However, relocation is not always possible.

“It’s very risky for everybody involved, including the animals … so that’s not always an option,” Ross said, “and when it’s not, the only thing we’re really left with is shooting the animal to get it away from humans so it doesn’t hurt anybody.”

Despite efforts on the part of IDFG to educate people about the dangers of feeding wild animals — whether acidosis, habituation, disease spread or anything else — that feeding continues in North Idaho. While feeding wildlife is illegal in places like Montana, the state of Idaho has no such law on the books.

Haag said that those who choose to feed deer, elk and other wildlife don’t always see “the damage that they do.”

“A lot of times, the deer or the moose or whatever it may be will wander off and die because it feels horrible,” he said. “So, they had six deer that come in and now they have five. They didn’t see that one go off and die in the creekbed. They don’t see that deer that gets hit by a car because it’s coming over to get the corn.”

The bottom line, according to wildlife officials, is that animals don’t need human assistance in the winter. The best way to help them is to enjoy them from a distance.

“Intentions are good from the beginning, and I do believe that,” Ross said, “but we try to remind folks that feeding never ends well for the animal.”