One of the biggest concessions made in passing the recent the national omnibus budget bill was an agreement to lift an export ban on domestically produced crude oil.

That could mean more volatile Bakken crude sloshing through Sandpoint on mile-long oil tanker trains. An increase in those trains is assured if a slew of proposed oil terminal projects are built along the Washington Coast, as well.

The biggest of the proposed terminals is the Tesoro Savage, or Vancouver Energy, terminal project in Vancouver, Wash. That terminal could handle up to 360,000 barrels of oil per day – making it the largest oil terminal in the U.S., if constructed. 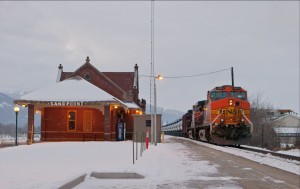 That amounts to four to five additional full oil trains per day rumbling alongside the Kootenai River, coming through downtown Bonners Ferry and Sandpoint, crossing the Long Bridge and the Rathdrum Prairie Aquifer enroute to Washington.

The project was subject to an environmental review by the state of Washington, and a hearing on the project is scheduled for Jan. 14 in the Spokane Valley before that state’s Energy and Facilities Site Evaluation Council (EFSEC). The 10-member council will then make a recommendation to Washington Gov. Jay Inslee on whether or not to approve the massive oil terminal. Gov. Inslee has the final say.

Concern is rife over the potential for a “pipeline on rails” through North Idaho, Spokane and down the Columbia River to the ocean. Among the chief concerns:

•The potential for derailments. The draft environmental impact statement  (DEIS) predicts a derailment of a loaded oil train once every two years between Sandpoint and Vancouver, but a recent news article in The Spokesman-Review highlights weaknesses in the study, including a conflict of interest: the consultants formerly worked for BNSF Railway and currently have BNSF as a client.

•Rail delays and transportation problems. The proposal would have “major cumulative impacts to transportation” in the Pacific Northwest, according to the DEIS, and local officials have repeatedly expressed concerns about increased coal and oil trains blocking traffic and emergency responders.

•Impacts on climate change. The hearing comes on the heels of the U.N. climate talks, where targets were established to reduce CO2 emissions. The amount of CO2 that would be released from oil handled by Tesoro Savage would be roughly 54 million metric tons per year – which is 0.1 percent of annual greenhouse gas emissions globally.

The Idaho Conservation League is working with the Stand Up to Oil campaign to encourage Idahoans to attend the upcoming hearing and provide comments on the proposal. ICL’s role is to supply information and help coordinate rides to the Jan. 14 hearing.

For more information on how to get involved, visit the Take Action page on the Idaho Conservation League’s website, www.idahoconservation.org or call (208) 265-9565.

Susan Drumheller is the North Idaho Associate for the Idaho Conservation League and lives in Sagle, Idaho, near the railroad tracks.