Lake Pend Oreille reached summer pool on June 24. Measured at the Hope gauge, the lake’s summer height will hover between 2,062 and 2,062.5 feet through about mid-September.

Summer weather has been teasing the region, but with weather good enough for boating during much of June, some locals were wondering why it took so long for the lake to rise to its prime recreational level — namely, those with fixed docks on their properties. 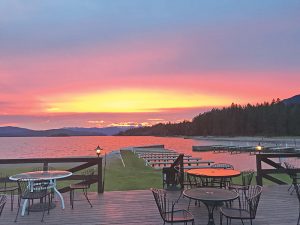 A sunset from Beyond Hope Resort in Hope. Photo by Lyndsie Kiebert.

Beyond Hope Resort manager Kiera Bortz said that the marina portion of the resort is made up almost entirely of fixed docks, and for the first few weeks after Memorial Day, most visitors coming by boat had to use the marina’s few floating docks due to water height.

“That’s the downfall of fixed docks,” Bortz said, noting that while fixed docks are best for secure mooring, they aren’t great before the lake reaches summer pool. “I definitely feel like (the lake) came up later this year.”

Bortz is right — for the last two years, the lake has hit summer pool earlier in June, but according to Upper Columbia Senior Water Manager Joel Fenolio with the Army Corps of Engineers, that was only because the previous two winters were nothing like what the area just experienced.

“This winter was a whole other animal in terms of hydrology,” he said.

Fenolio said that while 2015 was a record dry winter and 2016’s snow pack was almost entirely lost by the following April, this winter brought record-breaking precipitation and record-low temperatures.

To accommodate all of the extra inflows of water from the snow melt-off and precipitation this spring, Fenolio said Albeni Falls dam remained on free flow — all 10 gates completely open — from April 18 to June 12. While Fenolio and his team contemplated closing the gates earlier that weekend due to the rapidly diminishing snowpack, an incoming storm anticipated to drop high volumes of rainwater over the whole region made them postpone the closing of the gates.

The storm was not the major precipitation event it was predicted to be. As a result, inflows were not what they were projected to be, the gates were closed a couple days later than they probably could have been and the lake dropped slightly while it attempted to catch up on the water it lost, Fenolio said.

June is prime flooding season in the region, so Fenolio said the Army Corps of Engineers keeps the lake down as long as flooding is a threat. However, the corps acknowledges the public’s desire to have a long season of recreating on the lake, and they’ve made compromises in the past in the interests of serving the lake’s recreational purposes. Despite competing interests, Fenolio said the corps tries to strike a balance.

“In dry years, we’ll be aggressive in getting the lake up,” he said. “But preventing floods is our number-one priority.”

The Army Corps of Engineers released a statement June 21 advising the public summer pool would be reached in the coming days (and it did, just three days later), and also advising boaters to be conscious of driftwood on the lake due to a breach in the shear boom system discovered in May.