One of the many moneymaking ideas in President Donald Trump’s proposed 2018 budget could end up directly affecting the utility bills of people in Bonner County and across the entire Pacific Northwest.

The budget, officially released May 23, proposes selling several Power Marketing Administrations’ assets to increase funds for the U.S. Treasury. One of those PMAs is the Bonneville Power Administration, which is estimated in the budget to raise just under $5 billion by privatizing assets from 2018 to 2027. 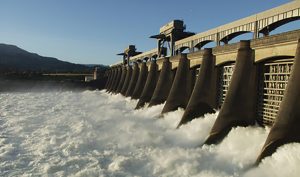 The Columbia River flows through the Bonneville Dam in Oregon. Photo courtesy of Wikipedia.

BPA operates three quarters of the Northwest’s high-voltage transmission system and provides transmission service to regional utility companies like Avista and Northern Lights, Inc. Thus, the ripple effect of the proposed sale could be felt on a local level.

According to an article by the Oregonian, Robert McCullough, Portland energy economist, said the $4.9 billion price tag is drastically smaller than BPA’s assets’ actual value, which is somewhere around $9 billion. The $4.9 billion is even smaller, McCullough said, than the $6.1 billion depreciated value on the agency’s balance sheet.

According to McCullough’s research, such a low sale price would raise rates for customers by 26 to 44 percent. BPA sells services at cost, but a private company would need to make a profit and pay income taxes that BPA hasn’t had to pay due to their status as a government entity, McCullough said.

“Over the last 40 years, Republican and Democratic administrations alike have utilized the federal budget process to target the PMAs in the name of deficit reduction. The Pacific Northwest has successfully fought off all of these attempts,” NLI said.

The company noted their main concerns with such a sale would be loss of regional control and value, risk of increased costs to consumers, potential for remote areas of the system to be neglected therefore harming rural communities and impacts to reliability of what is currently a complex and integrated system.

While Avista said there is no detailed information at this time regarding their stance on the proposed sale, “any issues or opportunities associated with a proposal to sell BPA transmission assets will need to be evaluated by Avista in light of their impacts upon our customers.”

While the proposed budget is far from approved, senators on both sides of the aisle oppose the possibility of PMA asset sales.