Residents throughout North Idaho, eastern Washington and western Montana have experienced ongoing smoke-choked skies — with the air quality index reaching into the “hazardous” category Sept. 12 and, despite morning rains on Sept. 14, remained “unhealthy” — as the Kootenai River Complex continues to burn on more than 20,700 acres in the high country surrounding Bonners Ferry. 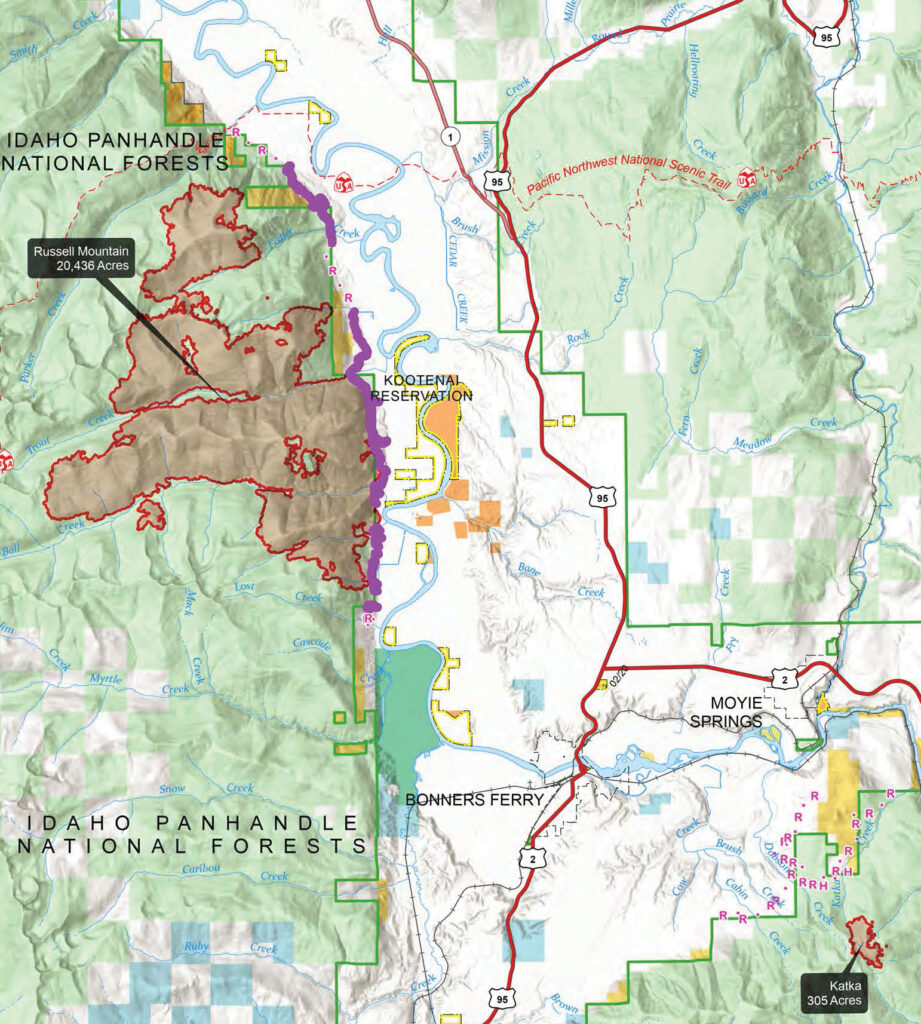 A map of the Kootenai River Complex fire, which continues to burn on more than 20,700 acres in the high country surrounding Bonners Ferry. Image by USFS.

According to a Sept. 14 update from the Type 2 Northern Rockies Incident Management Team 4, smoke from the Kootenai River Complex has been exacerbated by other fires throughout the western U.S., though light winds on Sept. 13 helped keep local fire activity minimal.

Fire managers grouped the Eneas Peak, Katka, Russell Mountain, Scotch Creek and Trout fires into the Kootenai River Complex on Sept. 2, noting Sept. 14 that the Russell Mountain Fire had consumed and been merged with the Trout Fire.

That means the Russell Mountain Fire now includes the Trout, Scotch Creek and Eneas Peak fires, located about seven miles northwest of Bonners Ferry. The Katka Fire is burning on about 305 acres eight miles southeast of Bonners and five miles west of the Idaho-Montana border.

An overnight infrared detection flight Sept. 13-14 showed an increase of 1,034 acres across the fire area. Smoky conditions grounded helicopter operations Sept. 12 and Sept. 13, and officials stated that may continue to be the case, depending on whether heavy smoke levels persist.

According to reporting Sept. 14, the Katka Fire to the southeast and Russell Mountain Fire to the northwest were burning as low-intensity ground blazes, with a total of 369 personnel onsite. Work on the perimeter of the complex of fires was at 79% as of Sept. 14. Fire managers estimate full containment by Oct. 15.

The blazes are burning in a mix of subalpine fir, lodgepole, larch and cedar, with an understory of mixed shrubs and heavy dead and down trees. In addition to standing dead trees in the steep terrain, the fire area poses a continued threat both to containment lines and firefighter safety.

Crews are working on thinning vegetation along parts of Westside Road, as well as strengthening the fireline and using pumps and sprinklers to prepare private structures, as the fire is anticipated to continue moving downhill toward Westside Road and the fireline.

No structures are currently at risk and there are no evacuation orders for residents, though fire officials stated that those living on Westside Road closest to Ball, Burton and Clark creeks are in “set” evacuation status — the readiness stage prior to evacuation.

Cloudy conditions and rain on Sept. 14 caused the fires to smolder and creep, which fire managers estimated would continue through Thursday, Sept. 15. Decreased fire activity was also anticipated through the week, with nighttime high relative humidity helping moderate growth.

Meanwhile, suppression efforts and fire activity have resulted in road closures or restricted access to a number of areas. Westside Road is open only to residents, while Ball Creek (FR 432) and Trout Creek roads (FR 634) are closed.

Residents in Boundary or Bonner counties can visit nixle.com or text their home zip code to 888777 to sign up for emergency alerts. To track the Kootenai River Complex, go to inciweb.nwcg.gov/incident/8378.