It’s a good thing Jeff Coleman had a hard time getting reliable internet in Cocolalla. If he could stream movies, maybe he wouldn’t have opened his food truck, Shilla Korean BBQ with Seoul, behind the 219 Lounge.

The way Coleman tells it, he moved in February from Greensboro, N.C. to be near family in the area. “I was going to Super One to rent movies — a lot — because in Cocolalla, you know, the internet’s not so great,” he said. “One night I was there and felt like having a drink in town. I asked where was the best place, and they told me to go to the 219.” 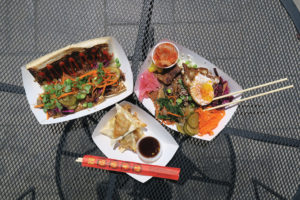 Coleman took that advice and, seeing Mel Dick moving some tables around, reasoned correctly that he was the owner.

“I said [to him], ‘You need some food out back here and I want to do a Korean barbecue truck.’”

Thanks to his six years of experience at a French fine-dining restaurant in Greensboro — and the coincidence that he attended the same high school as Jamie Terry, whose husband Mark manages the 219 — Coleman’s culinary bona fides paved the way for Shilla Korean BBQ to set up just outside the back patio gates at the 219, accessible from Second Avenue.

“This is the spot to be, definitely,” Coleman said.

Shilla Korean BBQ with Seoul opened for business during Lost in the ’50s and has since established a lunch-time crowd and an even more robust late-night clientele. Hours run Tuesday-Saturday, 11 a.m.-3 p.m. and extend to 8 p.m.-2 a.m., Thursday-Saturday.

Customers steadily cued up at the Shilla Korean service window during a recent sunny Tuesday lunch hour, with the gogi hoagie as an apparent favorite.

It’s a hefty sandwich. Piled with tender, spicy pork locally sourced from Wood’s Meats on a bed of tangy marinated veggies and topped with pepper jack cheese, the star of the dish is Coleman’s “secret sauce” — a red pepper paste whipped into an aioli with strong notes of garlic and sesame seed oil. The bread is lightly toasted and stands up to the rich sauces without becoming overly soggy, but you’ll want to cut it up into manageable pieces. Definitely a sandwich that’ll carry you through the afternoon.

The bop bowl is Shilla’s take on the iconic bibimbap — a rice-based dish that mingles together meat, vegetables, the pungent fermented cabbage kimchi and topped with a fried egg. True to form, the bop bowl comes to the table as a riot of smells, colors and flavors. The traditional short rib option features meat that’s thick but not fatty; tender without being oily (don’t forget about the bones, though). By definition, Korean pork is often salty but a sprinkling of sesame seeds serve to mellow the flavor.

Thick slabs of gently cooked shiitake mushrooms are a pleasant surprise, hiding among the medley of marinated spinach and strips of carrots. Break the egg atop the pork, let the yolk seep into the rice and mix with the veggies — which include vibrant purple cabbage and electric-yellow Korean peppers — and you have the quintessential Korean comfort food. 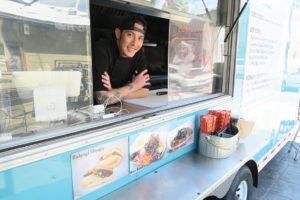 Jeff Coleman hard at work in the food truck. Photos by Zach Hagadone.

Coleman nods with approval at the notion of “comfort food.” Food is a family affair in Korea, with several generations gathering in the kitchen early and often to prepare meals.

“I grew up on Korean food,” said Coleman. “I’ve been cooking it since I was old enough to use the stove; since I was about 10 years old. I’ve always loved it.”

Born on an Army base in Wiesbaden, Germany, Coleman served two six-month tours in Tikrit, Iraq in 2010-2011 before his stint in French cuisine in North Carolina. Through all his travels, though, the traditional Korean cooking of his mom and grandmother have stuck with him.

“This is a super-family business,” he said, adding that his mom is his partner, waking up every morning to make the mandu potstickers by hand. His brother, who works for the railroad in Tacoma, Wash., designed the logo and helps out by driving to Sandpoint with deliveries of otherwise hard to find Korean sauces and ingredients from the Pa-Do Market. His stepdad, a driver for Litehouse, hauls the trailer to catering gigs.

Even the name of the food truck has a family connection. Coleman said his mother’s lineage goes back to the Shilla dynasty, sometimes spelled Silla, which unified and ruled Korea from the seventh to the 10th century.

“All this,” Coleman said, gesturing toward the food truck, “the cooking, the breaking down the meat, making the sauces — that’s all me, but really my grandma taught me how to make all this food.”

Maybe, then, it’s to the credit both of Cocolalla’s dodgy internet and Coleman’s grandma that Shilla Korean BBQ now offers up gogi hoagies and bop bowls at the 219. A welcome addition both to casual lunch diners and, certainly, those craving something salty, savory and filling in the small hours of the night.

“You can be this hidden gem for only so long,” Coleman said of Sandpoint’s growth and what it means for the future of late-night dining. The same might be said for Shilla Korean BBQ.