Katie Begalke: Reaching out to women in need

The road to healing from personal trauma is a long one. And for Katie Begalke, it led to Sandpoint. 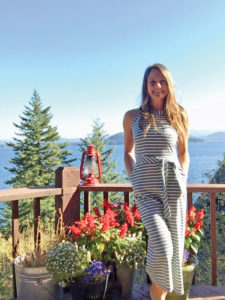 Katie Begalke stands on her balcony in front of the lakeside view that helped her own healing process. Courtesy photo.

The survivor of an abusive marriage, Begalke understands how lonely the recovery process can be for women who don’t know where to turn. It’s what inspired her to found the organization REturn REtreats, which recently received nonprofit status. Begalke hopes that the retreats hosted by the organization will help women who have suffered similar trauma to find their peace along the shores of Lake Pend Oreille, just as she did.

“You have the four seasons here,” she said. “And I went through four seasons of healing in this unbelievably glorious environment. … Just seeing and being in nature was so restorative, and I want to recreate that experience for other women.”

The inspiration for REturn REtreats was born from a painful past. Begalke had given up her steady job in her home state of Wisconsin to pursue a freelance graphic design career in Seattle. She met a man and eventually married. Six months later, he was in jail for attempting to strangle her.

“It was frustrating and sad and incredibly life-altering and shaking. And embarrassing,” she said. “I didn’t know who to talk to, so I hid it.”

She gave him another chance. They went to counseling. He stopped drinking and, in a gesture of support, so did she. Three months later, the cycle started over again.

“Now that I’m out of it and done some learning on the topic, it’s all very textbook,” she said. “But when you’re going through it, you don’t know … that you’re not responsible for his actions. I thought I was pushing buttons or somehow deserved it, which is a bunch of crap.”

Thanks to family support, some careful planning and an uncle armed with bear spray and a baseball bat, Begalke finally moved from her Seattle home, leaving the city and abusive relationship behind her.

The only question: Where should she go? She knew she didn’t want to move back to Wisconsin. Through happenstance, the perfect rental opened up in Sandpoint, and before she knew it, two and a half years had passed.

During that time, she received support and compassion from Priest River Ministries for Women, a small faith-based organization. But the ministry is largely run by one woman, Rhonda Encinas, who is looking to retire eventually. That was motivation enough for Begalke to lay the groundwork for what would become REturn REtreats.

While Begalke is inspired by her own Christian faith, she envisions REturn REtreats as a resource for women of all backgrounds and beliefs.

The idea is to provide women with weekend retreats built around on several pillars: yoga and meditation, outdoor experiences, spiritual renewal, skill-building workshops and more. She also aims to establish a respite suite on the property, where women seeking to escape abusive or otherwise difficult circumstances can find shelter.

“It’s a great opportunity to give love to somebody in a really concentrated way,” Begalke said.

She also sees the retreat organization as a way to funnel money toward organizations that assist women in need. Her plan is to direct 30% of annual income toward Priest River Ministries’ support services for victims of domestic violence, sexual assault and trafficking; 25% to Life Choices’ post-abortive and sexual assault counseling programs; and 20% to Panhandle Animel Shelter.

“A lot of people don’t leave their domestic abuse situation because they’re too afraid of what will happen to their animal. … We’re in the midst of talking about how we can start a fostering program for those women’s animals while they need to get out of a crummy situation,” Begalke said.

Begalke hopes to have property for a retreat center purchased and weekend experiences ready for the public within three years. In the meantime, she is focused on raising funds and organizing the support necessary to get the project off the ground. That means pursuing grant funding and hosting special events.

An easy way to get connected while enjoying a fun night out is Begalke’s female-focused trivia night, which takes place the third Thursday of the month from 6-9 p.m. at the Back Door, 111 Cedar St. You may even catch Begalke costumed as a historic figure of female empowerment — she’s already attended as Annie Oakley.

With REturn REtreat’s nonprofit status acquired, Begalke sees a new road ahead of her — but it’s markedly different from the one that brought her to Sandpoint. That was a journey of healing and self-discovery. Now she hopes to walk alongside other women as they find their own way forward from a traumatic past. And she can’t wait to see where that road leads.

“I think a lot of the healing process for individuals is helping others,” she said. “That’s the biggest healer, and this is an opportunity to lend my experience to others.”

Begalke welcomes any questions or suggestions for REturn REtreats. Email her at [email protected]