Panida announces historic sidewalk bricks are ready to be picked up

For years, passersby and visitors to the Panida Theater walked over more than 300 bricks purchased by and bearing the names of individuals and organizations who pledged to support the theater. Though long an iconic part of the downtown landscape, the bricks had to make way for reconstruction work on First Avenue this year — requiring that workers pull up and attempt to save each for eventual return to those who bought them.

With the street work complete and as many of the bricks as possible collected, the theater announced that those still intact are available to be reclaimed by their original purchasers. 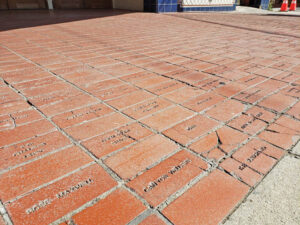 The Panida bricks before they were removed. Courtesy photo.

“These treasures recall the heart of Sandpoint and will find a place of honor in donors’ homes and gardens,” theater officials wrote in a news release.

Many of the bricks had already been damaged by wear and tear, as well as years of snow removal, but according to a list from the theater, the vast majority survived. They are now displayed alphabetically in the Panida Little Theatre.

The names of those whose bricks could be saved are now listed on the panida.org website (panida.org/bricks-at-panida-theater#brick-update) and on the Panida Facebook page.

The new sidewalk in front of the Panida now sports a brass inlay, installed by the city of Sandpoint, celebrating and honoring the community support represented by the former bricks, reading: “Panida Theater — Community Supported — Mission Driven.”

An additional commemorative tribute will be designed to thank those who contributed to creating the original walkway. The Panida appreciates donations toward supporting the tribute.