Jacey’s Race 2018: Connecting families who are ‘fighting the same battle’

Morgann Swansen loves her dogs, swimming, going for walks and hiking. She’s a local kid with a “wonderful personality,” but Morgann is also a “3-month-old in a 4-year-old’s body,” according to her mom, Attea. 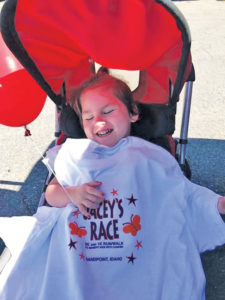 Morgann has Pontocerebellar Hypoplasia Type 2, a progressive genetic disorder stunting brain growth. Still, Attea said her family makes an effort to include Morgann in everything they do.

“We try to do all the same stuff everyone else does, we just do it in a different way,” she said.

Morgann is one of this year’s Jacey’s Race beneficiaries, along with 18-month-old Adelin Starkey (who has a congenital heart defect), as well as a 19 year old diagnosed with stage 4 Lymphoma. This year’s race is Sunday, July 8, with check-in beginning at 7 a.m. at Sandpoint High School.

Attea said apart from the fundraising aspect of the race, the event is also a great way to spread awareness about local kids with serious illnesses. She said she knows what it’s like to have someone make assumptions about her daughter because of her disorder. This is also not Attea’s first go with childhood illness, as her son passed away from the same disorder just days before his eighth birthday.

“Everybody with special needs kids are all walking the same path at some point,” she said, noting that being a part of the Jacey’s Race network has connected her with families walking that path. “You meet other kids and new families that are fighting the same battle.”

Jacey’s Race, a nonprofit centered around helping local children currently fighting cancer and other life-threatening illnesses, began in 2001 when then 4-year-old Jacey Lawson was diagnosed with a stage 4 Wilm’s Tumor. The race — the heart of the nonprofit — is an annual event.

Lawson, now cancer-free and in her last year of college at the University of Utah, said she still has people in Sandpoint recognize her name in conjunction with the race. She said she’s flattered to be known for the event, but admits she plays but a small role in the grand scheme of things.

“There are a hundred people behind me making my name what it is,” she said.

Lawson has grown up with the race, so she’s seen it evolve firsthand. She said that while the fundraising is an important aspect of the event, something that seems to become more and more prominent each year are the connections formed between families.

“It’s less about the money we raise and more about the families we’re supporting,” Lawson said. “(For the beneficiaries) the race is about, ‘look at all these people supporting us, and all the people who have gone through the things we have.’”

She said without those connections, she wouldn’t be the person she is today.

Support Morgann and the other 2018 beneficiaries by participating in this year’s Jacey’s Race. Register online at jaceys-race.com or in person after July 1 at the Alpine Shop, Bonner General Hospital, Arnie’s Conoco or at Fleet Feet Sports in Coeur d’Alene. Find the mail-in registration form and address on the race’s website. Registration is also available on race day at Sandpoint High School for an additional $5.

Part of the race’s proceeds will also go to Community Cancer Services and Bonner General Health.