Investment in Baldy property is a win for the city, residents

This is in response to Carrie Logan’s Aug. 18 guest opinion in the Bonner County Daily Bee [also published short-form in the Reader on Aug. 19 as a letter to the editor titled “Baldy purchase is a ‘sweetheart deal’ for disc golf course…’]. Her article is an attempt to dissuade the Sandpoint City Council from considering the purchase of the Baldy property, home to the only disc golf course here in Sandpoint, which experiences approximately 10,000 visits between May and October.

The Baldy property, carefully considered, has the potential to be one of the premier parks in the region. It could easily accommodate an extensive trail system for hiking, biking and skiing; offer a much needed dog park; as well as provide overnight camping for cyclists passing through the area. There is an amazing site for an amphitheater that could easily serve as home of The Festival of Sandpoint. The property is ideally situated between the Mickinnick trail head, Pine Street Woods and the city of Sandpoint, with trail connections that could be made over time. 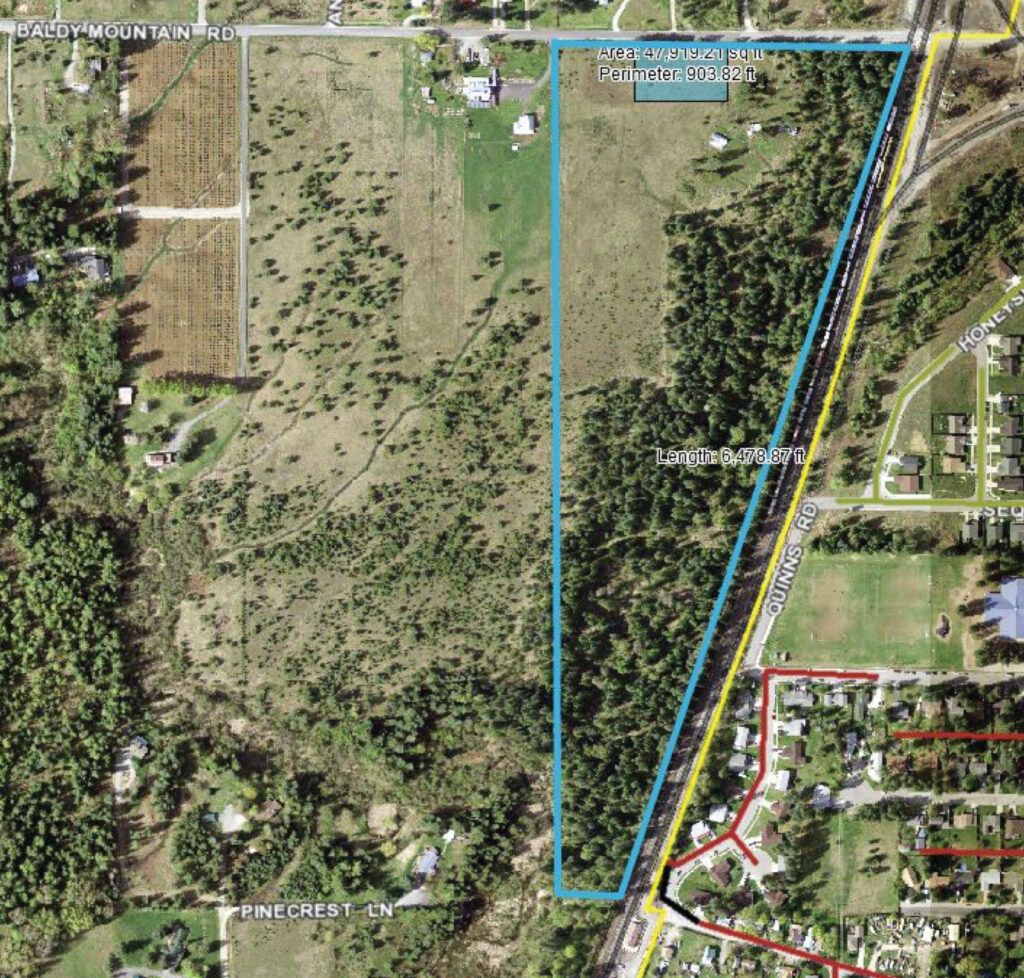 An aerial view of the Baldy property, with the Baldfoot Disc Golf Course outlined in blue. Courtesy city of Sandpoint.

The restrictions of what this property can offer are only limited by narrow thinking.

I recently spent time in the Methow Valley, in the Winthrop and Mazama area of the northern Cascades. Over the past 40 years this small mountain community has been able to create a Mecca of recreational opportunities, via a network of 120 miles of trails and parks, for the enjoyment of millions throughout the Northwest.

This effort to serve recreational needs has also turned out to be an incredible economic driver.  Methow Trails states on its website: Today the network of trails generates about $4.5 million directly, another $4.1 million indirectly, and another $2.7 million annually through related industry earnings in the Methow Valley. Additionally, some 49 full-time jobs and 159 seasonal jobs can be directly attributed to the network of trails and adjacent lands. Whitefish, Mont.; Ketchum; and Kimberley, B.C., are examples of other towns that have invested in trail systems that are creating similar economic opportunities for their communities.

I, along with many others, strongly encourage the Sandpoint City Council to purchase and/or partner with other organizations to bring the Baldy property into the city park system. Currently a city utility owns the property. The current approved city budget has $200,000 allocated for park land acquisition. The city has other properties it is considering disposing of that can help with a down payment and it can essentially buy it back, financed on terms it can set.

If the current City Council can see the long-term value of the property, I’m confident we have the financial wherewithal to facilitate a purchase. We only need to look at the risk/return decision that the Kaniksu Land Trust made a few years ago when it raised the funds to invest in Pine Street Woods to realize what a benefit the Baldy property could be for our community.

I encourage the city to do everything it can to hold on to this property, for as long as it can, until a well-considered decision can be made. It can always be sold, which is the easier choice; but, as we know, once open space is gone, it’s gone.

In her closing sentence Ms. Logan refers to a “sweetheart deal for the Eureka Institute,” which is ridiculous, as we share a meager amount of funding through the on-site donation box (approximately $5,000 per year, $4,400 pays the license fee) which is shared with the Sandpoint Disc Golf Association as the only source of funding. We administer the license agreement with the city simply as a community service.

The mayor has not been a board member for several years.

Steve Holt is executive director of the Eureka Institute, which partners with the Sandpoint Disc Golf Association to operate the Baldfoot Disc Golf Course.