Today’s spooky topic, in celebration of All Hallow’s Eve, was provided by Reader Publisher Ben Olson.

“I was just remembering the other day about the Ouija board we used to have as kids. I’m wondering if there is any science behind the board at all — as in, if there are three or four people who ‘swear they aren’t moving it,’ is there some kind of subconscious effort… or is it like birds migrating, how they instinctively follow the bird next to them”? 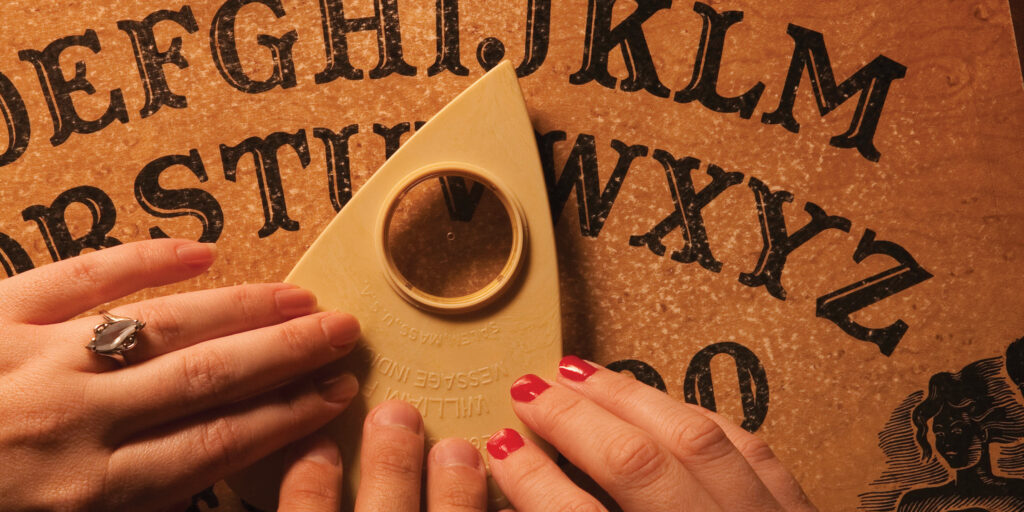 A closeup of a Ouija board. Courtesy photo.

The Ouija board is a creation with a long and mysterious history — its sole purpose being to host a seance from the comfort of your own home without the need for a medium.

The board’s function is simple: It’s a flat piece of wood or cardboard with letters, numbers and the words “Yes,” “No” and “Goodbye,” as well as a planchette — a triangular piece of wood or plastic that has a hole cut from center that’s used to show which portion of the board is being highlighted to the users.

Aside from the materials used to make Ouija boards, not much has changed since the first board was patented in 1891. As with all plastic and cardboard items, there isn’t really anything mystical or otherworldly about the Ouija board, but that doesn’t change the fact that human beings have always attached a certain level of mysticism and fearfulness to the device.

It all began with its patenting. As legend has it, the patent officer thought it was ludicrous to award a patent to what was so obviously a hoax item, so he issued the creator, Elijah Bond, a challenge. Use the board to correctly identify the officer’s name and the patent would be granted. Supposedly with the help of a medium, Bond allowed the spirits to guide him in correctly spelling out the name of the shocked patent officer, thus receiving a patent for a device that would go on to feature in every ghost movie from the 1980s onward.

While this might seem to be irrefutable proof of the dark knowledge of The Great Beyond, it’s worth noting that Bond was a patent attorney, and it’s extremely likely that he would have known the patent officer’s name by proxy before approaching him for a patent.

As the saying goes: “Never let the truth get in the way of a good story.”

Regardless, is there some science or psychology behind the use of the Ouija board? Is our collective consciousness guiding our hands toward some sort of cosmic doom?

Interestingly enough, this phenomenon can be reflected in an unexpected place: Led Zeppelin’s 1971 masterpiece Stairway To Heaven.

Supposedly, if you play this song in reverse, there is a portion of the song that conveys Satanic messages. The problem here is that you and five buddies can go in and listen to the same stretch of record separately, then reconvene and have heard something completely different. However, if you all go in after being told there are Satanic messages, you’re all going to come back and say that you’ve heard Satanic messages in the reverse track.

There is some merit to attributing this to the idea of groupthink, a term inspired by author George Orwell’s concept of “doublethink” in 1984 and coined by sociologist William H. Whyte in the early-1950s or psychologist Irving Janis in the early-1970s. No matter, groupthink is a common practice among humans in which individuals put the importance of their status in the social group ahead of their personal beliefs in order to maintain a favorable standing in the group, even if it compromises their ideals. This is frequently seen in group bullying, and one of the reasons that someone may be the kindest human when you’re one-on-one with them but they’ll repeatedly throw you under the bus in every work meeting they can.

In the case of seeing messages on a Ouija board, it’s a blending of these psychological traits. You’re in a high-stress situation, there have generally been some contextual clues floated between group members beforehand (think: when a ghost’s name is spelled out on the board, it’s almost exclusively after the group has already asked that ghost’s name aloud), and no one member of the group desires to be perceived as the weakest.

Your brain desires to find patterns in things and, in the absence of a pattern, it will fill in the gaps with contextual clues to create a pattern. Hence finding Satanic messages in reversed records only after being told about the messages, and spelling out names and phrases as a group where everyone has been given the same information.

Ben’s question was too good to answer fully in one article. The most interesting part of it will have to wait until next week. The psychology and mechanics behind the flocking of birds is completely different from human behaviors, so stay tuned and have a safe and happy Halloween.