The city of Sandpoint is accepting bids for a project to remove and reconstruct old sidewalks, as well as build new sidewalks, along the north side of Pine Street from Boyer to Division avenues. 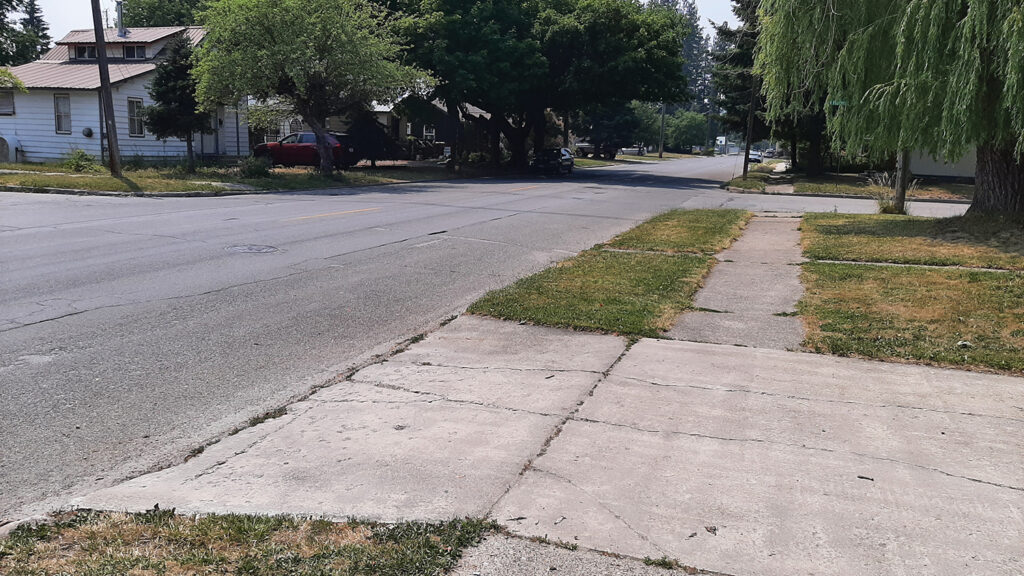 The sidewalk along the north side of Pine St. in Sandpoint. Photo by Ben Olson.

Bids will be opened and publicly read via Zoom and on site at the City Hall Council Chambers (1123 Lake St.) on Wednesday, July 28 at 2 p.m. Those who wish to participate in the Zoom presentation must pre-register.

Coeur d’Alene-based HMH Engineering designed the project, while the Local Highway Technical Assistance Council will act as the owner’s representative during construction.

According to planning documents, the project will be substantially complete on or before Sept. 30, 2021 and completed on or before Oct.15, 2021.

The project has long featured in city planning efforts, including the overall Multi-Modal Master Plan.

In a presentation April 21 on the plan, Sandpoint Infrastructure and Development Director Amanda Wilson said the strategy for prioritizing sidewalk work around the city “was based on, ‘Where do we think we need to have primary routes for pedestrians to utilize?,’ recognizing that some of these streets might require substantial amounts of investment.”

Those routes will receive attention first, aiming to establish pedestrian arterials, before a general program of filling in the gaps on secondary streets.

Meanwhile, the city also put out a bid for maintenance work on Spruce Street — a project identified as including pavement rehabilitation. The deadline to submit a bid for RFP Bid No. 21-3170-02 is Tuesday, July 27.

Find bid documents and the Zoom link at sandpointidaho.gov/doing-business/solicitations.