A lot sale in Priest Lake by the Idaho Department of Lands generated $18.9 million for the Idaho Public School Endowment with only one of 39 auctions contested.

The auction sale, authorized by Idaho’s Land Board, is part of a long-term strategy to gradually sell off lands in Priest Lake and Payette Lake to maximize benefits for Idaho’s endowments. The funds raised from the Priest Lake sale last weekend will benefit Idaho’s public school endowment. 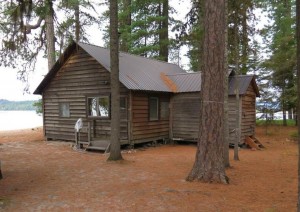 A rustic cabin on a 1.7-acre Priest Lake lot that sold at auction for more than $1 million. Courtesy of the state of Idaho.

Almost every sale in the auction sold for the lakefront lot’s appraised value and went to the current lessee. Winning bids among the uncontested auctions ranged from $300,000 to $669,604.

In the single contested auction of the sale, a doctor from Coeur d’Alene paid $1.107 million for a property with an assessed value of $740,000. The Spokesman-Review reports that the physician outbid the current lessees of the property, a Washington couple who had leased the land from the state for decades. The auction winner will pay the previous lessees an additional $44,200  for the value of their cabin.

Many lot lessees were upset by the ultimatum to either purchase the land or sell off their cabins. In the comments section of the Spokesman-Review, a member of the family that was outbid said that they had lost generations of memories.

“This was my family cabin, we’ve had it for almost 100 years. To say that our family is heart-broken is an understatement,” the individual, posting under the name TristenR, wrote. “We lost our precious family history and a cabin that holds so many precious memories and pride, to greed.”

“It is a shame what the state of Idaho has done to these lease holding families, forcing them to either say goodbye to cabins that had been in their families for up to 3 generations or be forced to pay beyond their means (these leaseholders are far from wealthy), many selling off their own homes, to hold on to their family and childhood memories [sic],” wrote another, posting under the name Ajohnson.

Authorized in 2014 and extended this year until 2019, the  reinvestment plan calls for selling off the remaining lots at Priest Lake and Payette Lake. To date, 228 cottage sites—141 lots at Priest Lake and 87 lots at Payette Lake—have been sold, generating approximately $97.7 million. The revenue from the sales will be used to invest in timberlands and, to a lesser extent, agricultural land, Arledge said.

According to Arledge, the state uses a voluntary auction process in which the lessees nominate the parcel or lot to be auctioned. After the property is appraised and approved for sale, it is auctioned off. By law, the state cannot accept any sale less than the land’s appraised value.

Arledge added that the Idaho Department of Lands manages 2.4 million acres of endowment land compared to the 3.6 million acres originally granted. The department has a constitutional mandate to maximize the lands’ value for the benefit of the endowments.