Connolly: ‘disingenuous’ to proceed knowing there will be no future public process for subdivision 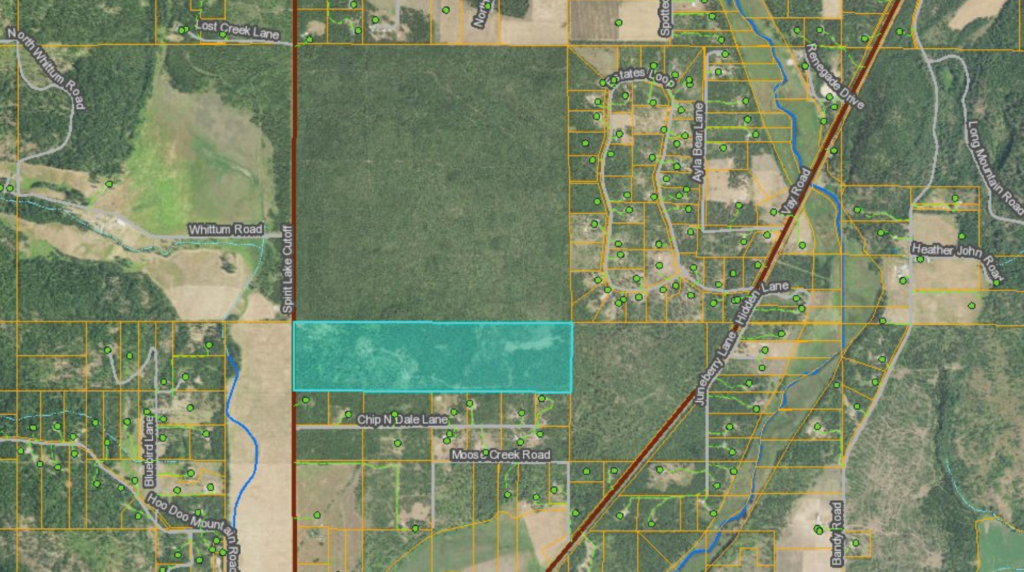 A map of the Hoodoo Valley area, with the 160-acre Daum Construction property highlighted in blue. Courtesy of Bonner County Planning staff report.

The Bonner County Board of Commissioners voted March 2 to deny the rezone of a 160-acre property in the Hoodoo Valley, putting the kibosh on a proposed Comprehensive Plan amendment and zone change by Hayden-based company Daum Construction, which sought to change its property from an agricultural/forestry designation to rural residential — and from a 10-acre parcel minimum to a five-acre minimum.

Bonner County Planner Jason Johnson presented the applications at the hearing, adamant to remind attendees and commissioners what, exactly, the file was meant to address.

Johnson pointed to a portion of county code called the “clustering provision,” which dictates that when a property is “in an area already developed at or near one dwelling unit per five-acre density,” then the higher density can be deemed appropriate. Located directly northeast of the Daum property is a subdivision with lots at or near five acres.

“At a previous hearing, there were some questions as to why this language was included, what does it do, why is it here?” he said. “There were public comments to the effect of, ‘Just because it was done before, does that mean we have to do it again?’ In a word, per the Comprehensive Plan, yes, that is what that means — you have to do that again.”

Deputy Prosecutor Bill Wilson, serving as legal counsel for the board during the hearing, asked Johnson to “discuss the basis” for the P&Z Commission’s recommendation to deny the file, stating it was inconsistent with the county’s Comp Plan.

“I wish I could,” Johnson said. “To be honest, I’m not terribly clear. … They adopted the findings of fact as record, but then came to a different conclusion. I can’t speak to the mindset of the P&Z Commission.”

Jeremy Grimm of Whiskey Rock Planning + Consulting, a representative for Daum, also argued that the P&Z Commission’s recommendation was not legally sound.

“If you had the chance to listen to that hearing or read the minutes, you’ll see that, in a quasi-judicial hearing, prior to starting the public hearing and hearing testimony, members of the planning commission were already … showing a bias and a definite opinion on the application prior to hearing details and facts of the case,” he said.

Though the hearing was not meant to address any potential subdivision plans for the property, Grimm emphasized the local need for housing as a reason to support the file.

Public testimony at the hearing ran exclusively against Daum’s proposal, with many residents expressing concerns about the ability of the area to absorb up to 32 new homes. Those concerns centered mostly on increasingly dangerous traffic conditions on Spirit Lake Cutoff Road, which will service any potential Daum development on the property, as well as worries about the land’s ability to handle more wells.

Attorney Norm Semanko spoke on behalf of project opponents, citing what he called a couple of “fatal legal flaws” in the planning staff report.

“You can not interpret this code to allow five-acre [parcels],” he argued.

Also among the commenters were Hoodoo Valley residents Doug and Maureen Paterson, who have been vocal opponents of the Comp Plan amendment and zone change since they first surfaced. Maureen stated that approving the file “undermines our farming community.”

Jonna Plante, a Sagle resident who has been involved in county land use issues since she helped lead the successful campaign against a proposed asphalt plant near her home in recent years, urged commissioners to hear the “will of the people.”

“This is not ‘mob rule,’ as [Commissioner] Dan McDonald describes on social media,” she said. “It’s called the majority, and it’s the basis of how we elect people, decide laws and how communities decide planning. So, please, let’s not force the community to sue the county, costing the taxpayers double.”

During deliberations, Connolly said he couldn’t approve the Comp Plan amendment and zone change in good conscience, knowing that any future development would not see a subdivision application. Though not public knowledge at the top of the meeting, Connolly revealed that Daum had already filed minor land divisions on the property — an administrative method of land division that allows an owner to create four lots out of a parcel without public review.

Though, according to planning officials, Bonner County has closed the loophole that allowed for contiguous MLDs, some property owners filed applications prior to the code change, and those must be honored under the code that existed on that filing date.

“I’m sorry, but it is disingenuous to present this as if it’s going to come back before the Planning and Zoning [Commission] and be discussed and all of those things addressed,” Connolly said, those “things” being a traffic analysis, well study and other data that must be compiled under the subdivision process.

Bradshaw disputed the precedence of the clustering provision as a reason to allow five-acre parcels, and said he saw “no reason to go smaller than 10” on the Daum property.

McDonald dissented, stating that while the Planning and Zoning Commission is made up of “great volunteers and they do a good job,” he could see some “built-in bias in their decision to begin with, and they really fumbled the football here by adopting these findings of fact.”

The board denied both the Comp Plan amendment and zone change on Daum’s 160-acre property on a split vote, with Connolly and Bradshaw voting to deny on both counts, and McDonald voting to approve.