Idaho Congressmen joined their colleagues and constituents this week in celebrating the life and career of former president George H.W. Bush. 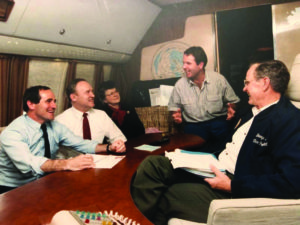 In a press statement, Sen. Jim Risch remembered Bush as a kind, generous man who was an icon of a political era.

“The world has lost a great and decent man,” he said. “From his service as a Naval pilot during WWII to his successful tenure as President of the United States, George H.W. Bush was a faithful servant of the people for so much of his life. As devoted as George was to our country, his true passion was his family. He will always be remembered for the pride he had in his children and grandchildren and the love he shared with his wife, Barbara.”

Sen. Mike Crapo recalled the immense historic change that occurred over Bush’s career. Guiding the nation through the end of Cold War and the realignment of the post-Soviet world looms large in his presidential legacy. Despite his single-term presidency that ended in a loss to former president Bill Clinton — popularly attributed to his raising taxes despite a campaign pledge to the contrary — he also had the highest average approval rating of any living president at 61 percent, according to Gallup.

“President George H.W. Bush lived a life of public service that demonstrated an unquestionable dedication and love of his country,” Crapo said. “A World War II veteran, President Bush’s service to the nation spanned decades and across numerous roles from serving as a member of Congress, Ambassador to the United Nations, and Director of the Central Intelligence Agency. As President, he saw the fall of the Berlin Wall and the collapse of the Soviet Union. I join with Idahoans in sending my condolences to President George W. Bush, and the entire Bush family.”

Like his colleagues in the Senate, Rep. Mike Simpson remembered Bush as a man whose love of country was only surpassed by his love of family.

“Kathy and I join countless others in mourning the loss of a true American hero,” he said. “President George H.W. Bush was not only an amazing public servant that dedicated his life to this nation in numerous roles, but he was also an incredible humanitarian to the world, all while being a great husband and father. Above all he was a good man. We send our love and prayers to the entire Bush family, and we know he is reunited with the love of his life, Barbara.”

As the Idaho chairman of Bush’s presidential campaign, Risch shared some particularly personal memories of the former commander in chief.