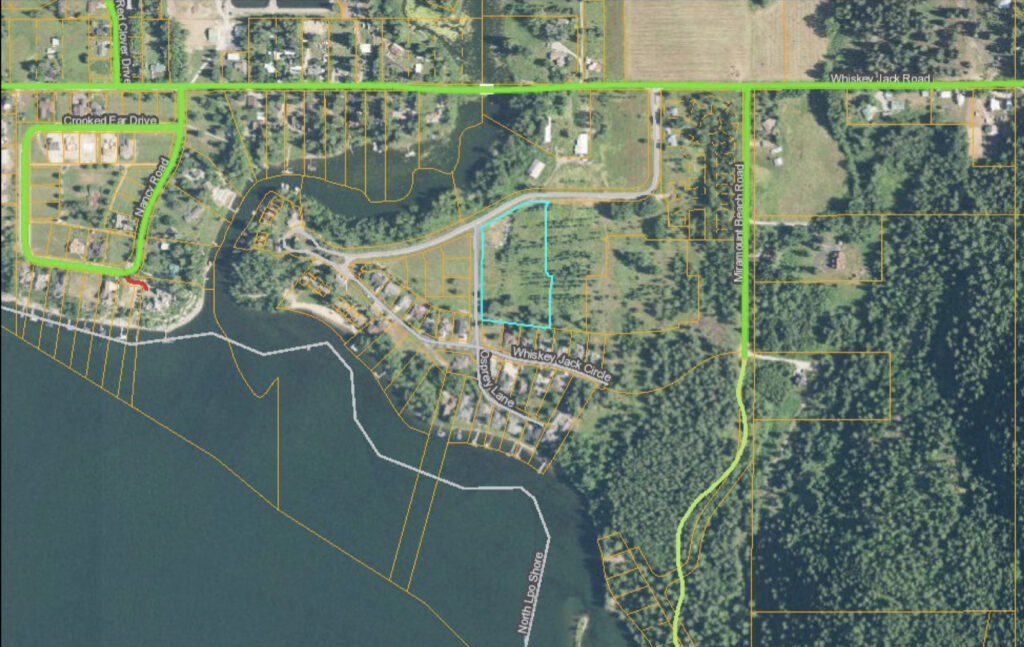 An aerial view of the proposed location of the Whiskey Jack Estates subdivision, with the blue outline indicating a parcel where the developer hopes to create 10 lots. The parcel directly to the right is also up for consideration to be split into 10 lots. Image from Bonner County Planning staff report.

Meanwhile, Project 7B claims that records show the developer’s intent to do the same with the two remaining lots.

Because minor land divisions and short plats are approved administratively, those applications never saw a public hearing. However, due to an appeal filed Oct. 28, citizens will have the chance to sound off about the proposed 10-lot divisions before the Bonner County commissioners on Dec. 9

“I am asking for an appeal of these short plats so the public will have the opportunity to voice their concerns,” the appeal, filed by Whiskey Jack Circle residents Charles and Margaret Johnson, states. “The present road access to this subdivision is not wide enough for increased traffic and emergency vehicles.”

The Johnsons list several concerns in their appeal, including the failing Boyer Slough bridge; lack of proper drainage; the already stressed Oden Bay Water system, which serves the Whiskey Jack area; and the fact that there is “only one exit out of this area, over railroad tracks, for both Ponder Point, Whiskey Jack Road, connecting side roads and Whiskey Jack Circle.” “There is a need for a second exit,” according to the appeal.