I wanted a barn cat

I got something else entirely

Most people can make assertions about what kind of person that makes me, and they’d likely be right. I am outgoing, energetic and enjoy the company of other people. I am drawn to sports, competition and high-intensity environments. I love verbal affirmations, and have been known to hang my head out the car window on a nice day.

It also means, of course, that I prefer dogs over other animals. Loyal readers know the unhealthy obsession I have with my cattle dog, Mac, so I’ll refrain from writing another ode to her unmatched canine perfection. Besides, in the spirit of Halloween, I’ve decided to share more about the spookiest creature in my house: Pistol, the black cat.

Pistol came to us in 2018 at an estimated five years old with a name and reported knack for killing rodents. While I adopted him to be a barn cat, I’d overlooked a major flaw in my plan for this new addition to the family: my then-boyfriend, now-husband Alex is — painfully and unequivocally — a cat person. 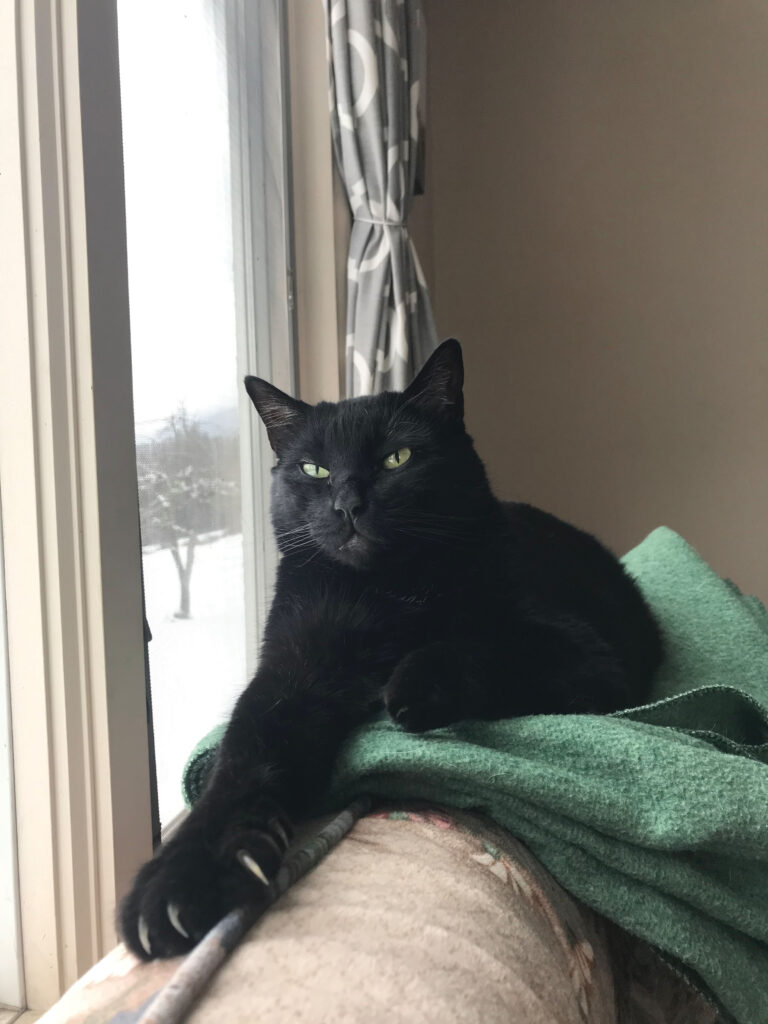 Pistol, who is definitely not a barn cat. Photo by Lyndsie Kiebert-Carey.

Let me paint a picture: It’s 5 a.m., Alex rolls out of bed and Mac follows. With flashlight in hand, my husband takes on the noble duty of letting out the dog in the cold dark of morning. I stay in bed, and would fall quickly back to sleep, if it weren’t for Pistol. In his mind, his human father — who he slept next to all night — has abandoned him, and the howls ensue.

Back in the house and starting on the coffee, Alex’s entire morning routine features Pistol at his feet until their daily goodbye. This ritual comes full circle each day, too. As soon as I can hear Alex’s truck coming up the driveway after work, so can Pistol, and the howling commences. It only stops when my husband comes through the door and the two are reunited.

More than once, I have watched Alex stoke the fire with Pistol tucked securely under his arm, staring into the flames with the kind of self-satisfaction only detectable on the face of a happy cat. One recent night, arriving home late from coaching a volleyball game on the road, I witnessed Pistol sleeping beneath Alex’s outstretched hand, purring the night away. When I crawled into bed, disturbing their precarious cuddling, I got a claw to the arm.

This barn cat has not once stepped foot in the barn on account that Alex wouldn’t have it. I’ve come to terms with this, mostly because Pistol earns his keep. Living in an old farmhouse, mice are a fact of life. Since Pistol came on the scene, the only fact of life is the occasional mouse carcass shown off proudly outside the bedroom door. I’ve also watched him take down a rogue, indoor bat. That earned him quite a few points in my book.

While our relationship might be more formal than the daily love fest between him and Alex, Pistol has grown on me in many ways. The simple presence of a cat has made our home warmer. He wrestles with Mac, stalking her around the house until she relents and paws back at him. People ask whether I’ll get another dog for Mac to play with, but the truth is that Pistol beats her up enough. It’s safe to say that she isn’t bored, thanks to him.

It would be disingenuous to say I’m a dog person and Alex is a cat person, and that’s that. People are complex, and Alex and Mac have an incredible bond.

Does the same go for me and Pistol? Not entirely. Am I thankful to cohabitate with a feline who keeps himself clean, eradicates the pests and provides the kind of passive-but-secure companionship that only cats can provide? Absolutely.

Here’s to you, Pistol. You’re a good boy.