Language is a bit of an enigma. It’s impossible to pin dates on the development of a particular spoken language. If it’s a written language there will be records, of course, but even these may not be truly reflective of when people first wrote things down — let alone when they started speaking. 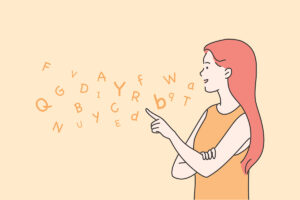 The spoken word leaves behind no direct physical evidence. It has no record of its existence apart from secondary relics born of shared knowledge. After a word is spoken, it exists only in the minds of those who heard it until it is repeated and translated by others. Because of this method of transfer, speaking isn’t nearly as efficient as writing when trying to preserve a message, but it’s far more efficient at conveying knowledge than gesturing.

Because of the impossibility of accurately pinning a date on the formation of human language, most scientific debate on the matter has completely ceased. Very little of this topic has been discussed in the scientific community since the 1800s, but that hasn’t stopped people from forming numerous hypotheses about it. The merits of discussing something that will never be proven without time travel is questionable at best, but it’s fun to think about.

The ability to vocally communicate information isn’t a concept that’s isolated to humans. Most primates are capable of some form of vocal communication, as are dogs, cats and most birds. Many birds are capable of complex vocalizations designed to communicate specific messages. Take the black-capped chickadee as an example. Each chickadee has a specific voice, and will perfectly replicate a call each time it makes it until an external stimulus triggers it to change the call. A chickadee calling its own name and singing “chick-a-dee-dee-dee” has been observed to be a “danger gauge” for other chickadees. This call is warning other chickadees in the area about how dangerous a moving object in their field of vision is. The more “dees” added, the more wary other chickadees should be. The caller will similarly use the exact pitch and tone each time it sings, though these pitches and tones will vary from bird to bird — similar to an accent or a dialect in human speech.

Dogs and cats are both capable of vocalizations as well, and each carries its own set of quirks specifically adapted to living in close proximity to humans. The various noises our dogs make generally serve the purpose of communicating basic needs to humans. Dogs rely more on body language than vocalizations to communicate their desires, though each dog has a unique repertoire of barks, yips, growls, howls and calls, depending on a number of factors from upbringing to breed.

Cats have also developed a set of vocalizations specifically designed to capture the attention of people. Domestic felines seem to know how to tug at our heartstrings, offering a light and pitiful “meow” that they only direct at humans. This is similar to the way we baby-talk our pets, but it is unique in the fact that it’s a response developed specifically for interspecies communication. It would be like if you spoke Dothraki to your cat but reverted to English when speaking with other humans. How do you say:”Stop clawing me” in Dothraki?

We can’t pinpoint when humans first started using language, we have to use other evidence to guess. The clearest indicator that language may have been at play among prehistoric humans are shared tool designs. It didn’t take Albert Einstein to flake chunks off a rock and create a point, but seeing identical designs popping up from Africa to Europe is a pretty good indicator that humans had some ability to do more than show others how to make a tool, but tell each other and compare notes as well.

Acheulean tools are what we think about when we imagine cavemen wielding stone tools: often pear-shaped or formed into a triangle, these first showed up around 1.6 million years ago and have been excavated as far north as France, as far south as the southern tip of Africa, and as far east as China and Indonesia.

It’s likely that language evolved in tandem with the development of tools, as crafters needed a way to communicate to others how the items were made as well as convincing other groups of people to trade goods for their tools.

It’s impossible to say what the language of humans from 1.6 million years ago sounded like. It may well have been the comical grunts we attribute to cavemen in modern media, though I’ll be the first to admit that this is a silly trope. The fact that we move our mouths differently from people that long ago doesn’t automatically make us smarter than they were. Whatever they were speaking, they were undoubtedly able to elicit the same range of emotional reactions that Shakespeare would evoke millions of years later, as their language was intrinsically tied to their life experiences.

The value of language comes from what you and those around you take from it. A song’s lyrics may bring you to tears but it may cause me to change the dial. This is just as true of other languages than our own today.

If you have a love of language arts and you want to share that love with your community, consider volunteering to become a tutor at the library. We have a magnificent team of tutors at the library, but they need help. Our population is rapidly increasing, as is the demand for tutors. The library is able to provide training and support to get you started on the path to becoming a volunteer tutor — all you need to worry about is showing up and sharing your passion to help others learn and appreciate language like you. If this seems like something that would appeal to you, apply at ebonnerlibrary.org/volunteer.

Did I mention that the library will throw parties in your honor? Our love language is pizza.